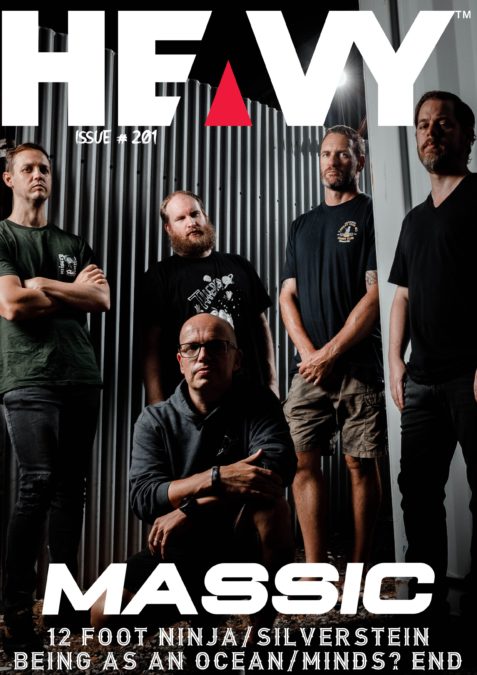 Due to some personal matters I have only had time to put out one digital magazine this week, so you are in effect getting a super version of your weekly metal round up!

Brisbane hardcore/groove outfit Massic are our cover feature this week, talking about their new album Cognisant which is due out on May 13. If you haven’t heard these guys before, check them out now! You will thank me…

We also catch up with Silverstein about their new album, Being As An Ocean about their 10 year anniversary tour, plus 12 Foot Ninja, Minds? End and Ocean Shores all sat on the couch for a good old fashioned grilling.

There’s a shit tonne happening in the live arena, with Uncaged and Wallapalooza both touching down in different cities and there’s also current or upcoming shows from Electric Mary, Bodyjar, Devilskin and Avalanche, as well as Voltasesh 3 and news on the new album from Superheist.

We bring you new music from Ekko Park, Demiricous, Synge, Burn The Highway, Powerwolf, Slowly Slowly, The Faim, Muzzlemouth, Battle Beast, Floya, Stray From The Path, Dance Gavin Dance, Raised As Wolves, Mojo Alice, Downset, Evergrey and Slash, plus our review team runs their ears over the new releases from Fuzigish and the 7″ split from Black Rheno and Child Bite and to top it all off we review the recent Devilskin, Uncaged, New Dead Metalfest and Caligula’s Horse shows!

If you are still not satisfied, check out HEAVY Cinema for all the latest from the world of movies.