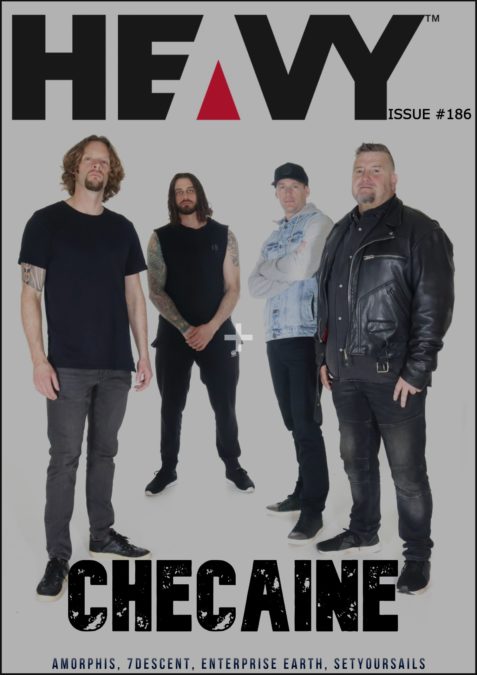 For the first time since I have been with HEAVY, I am proud to present a New Zealand band gracing the cover of this week’s Digital Magazine, and rightfully so.

Hamilton rockers, Checaine, who have released a steady and consistent stream of rock bangers over the last 12 months, are almost ready to drop their latest EP called Black River, with vocalist Fraser Coombes joining HEAVY from across the way to chat about the fruits of their labour.

We also speak to Amorphis, Enterprise Earth and 7Descent about their new music, while it gives me great pleasure to welcome back one of the longest serving contributors to this great magazine, with Will Oakeshott tracking down Sundrowned for an awesome little chat.

There seems to be more new music out in the last seven days than the previous seven weeks, which isn’t necessarily a bad thing.

We bring you news on the just announced Knotfest Roadshow Tour headlined by Slipknot, Midnight Cities upcoming shows, an exclusive view on the listening party for Meshuggah‘s just announced album, how you can help Support Act and an in depth look at the good folks from Groglords and how they can help make your days full of metal.

Our review team has been kept busy as well, checking out the debut EP from Aussie metalcore newcomers Engraved, as well as the new album Nightfall from Setyoursails, Pridelands latest Light Bends and the awesome new offering from Enterprise Earth, The Chosen.

HEAVY Cinema didn’t miss out on the action either, with reviews of the latest Scream movie plus Don’t Look Up, trailers for upcoming blockbusters Moon Knight, A Stitch In Time and The Last Thing Mary Saw, plus we speak to the stars of Claw and bring you the new screening dates for Aussie flick Beyond The Wasteland.

If you are in Melbourne on Australia Day, come down to the Bendigo Hotel and help celebrate a decade of HEAVY, otherwise crank up those tunes and celebrate from afar.

Either way, until we meet again,