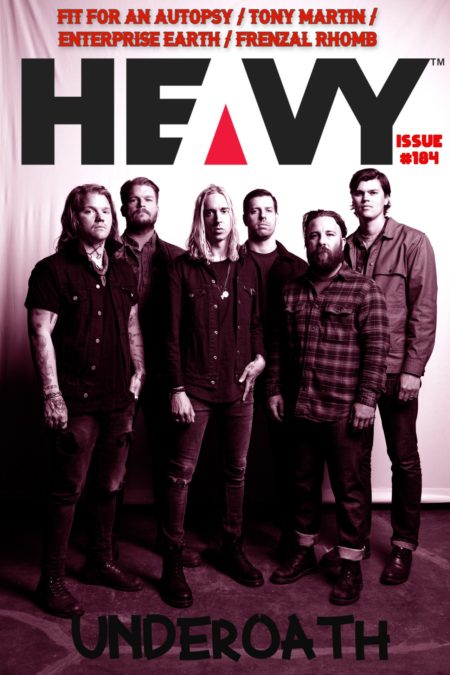 The new year is certainly kicking in, but, unfortunately, so is Corona and that dreaded sense of here we go again is starting to creep back into an industry that had finally actually begun to hope…

Lucky for us, metal follows no rules and, just like last year, has emerged as a shining beacon of light in an otherwise cesspool of shit, bringing us plenty of new music and interviews to hopefully take our minds off things for even the briefest of moments.

This week Underoath feature on the cover, talking about their new album Voyeurist which will be out on January 14. As do Fit For An Autopsy who promise to rank up the ferocity with their latest, Oh What The Future Holds.

We bring you news on tours from Pennywise, W.A.S.P., Chaos & Carnage and The Metal Tour Of The Year, and we bring you Jimmy Glinster‘s review of the new guitar from CHARVEL.

Our review team has a listen to the new albums from Underoath, Enterprise Earth and Tony Martin and that’s all before we even get to HEAVY Cinema!

That’s chock-full of reviews for House Of Gucci, Clifford The Big Red Dog, Ghostbusters: Afterlife, Spider-Man No Way Home, The Kingsman, King Richard and Addams Family 2, plus we have news about the next Jackass movie and an interview with one of the stars of the Book Of Boba Fett.

To top it off there’s the new trailers for Wolf Like Me, The Last Thing Mary Saw, Pam & Tommy and Moonfall.

If that doesn’t put a smile on your face, crack a can of Jack.

It works for me.