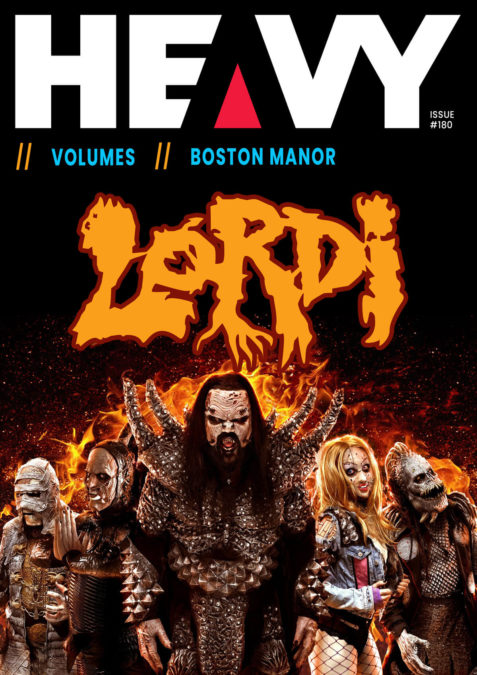 From this week HEAVY will be publishing the weekly International DigiMag on Saturday’s Australian time which should provide better coverage both at home and abroad, so let me know if you think this idea sux and I will revisit!

Lordi feature on this week’s cover, with Mr. Lordi himself stopping in to chat about their new single Merry Blah Blah Blah and the seven album Best Of series titles Lordiversity which covers the band’s greatest hits before they were even a band!

We also catch up with Boston Manor mid-tour and Volumes, who have recently dropped a cracker of an album.

The Destroy Boys also stop in with a special feature on Fender Player Plus, and our review team run their ears over the new ones from Bloodshot and Sunset Junkies, while the recent release from Scattered Hamlet was so good, we thought we would publish that review once more to re-iterate the point!

In HEAVY Cinema our review team bring you their thoughts on the latest blockbusters Dune, Encanto, Venom: Let There Be Carnage, Pig, Eiffel, The Power Of The Dog, Nitriam and The Rescue, and there’s also a special review on the 20th anniversary release of Aussie classic, Chopper.

There is also a couple of interviews with the stars of Comin Con, plus we catch up with Candyman himself…

If that isn’t enough to make your stocking full I suggest you go back to the start and go through it all once more just to make sure.