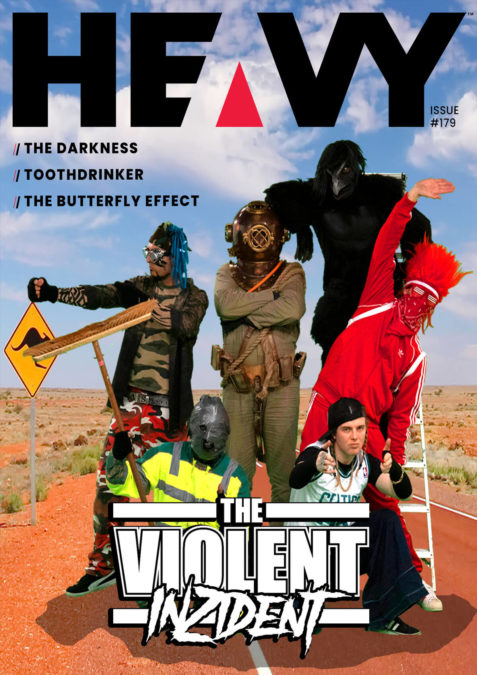 In a world of firsts, I’m happy to announce that this week HEAVY has pulled off a massive coup with the WORLD EXCLUSIVE FIRST EVER VIDEO INTERVIEW with nu-metal nu kids The Violent Inzident, and what a chat it was! I even dressed up for the occassion…

The Darkness also have a new album out, so we caught up with them as well as Toothdrinker and Australia’s own The Butterfly Effect, who have a cracking new song out. We also speak with Gold Coast outfit Veal about their new track in another video interview.

We feature new music from Of Mice & Men, Scattered Hamlet, Ventruss, As Within So Without, Reliqa, Rhapsody Of Fire, W.E.B, Hangman’s Chair, The Ocean, Fixation, Weatherstate and The Faim plus we bring you the new dates and line-up change for next years music extravaganza Under The Southern Stars.

Our reviewers run their ears over the latest E.P’s from Veal and st.sinner, plus we take a listen to the new album from Ad Infinitum.

The Popcorn Conpiracy returns in HEAVY Cinema, and we also catch up for chats with the stars of Candyman and three films from the upcoming Monsterfest International.

There’s the new trailers for League of Super Pets and Wyrmwood: Apocolypse so if that doesn’t keep you out of trouble then you obviously love trouble!