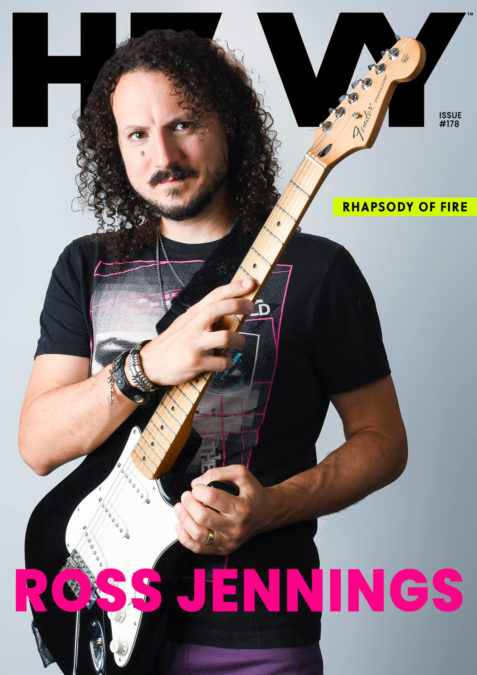 We all know Ross Jennings, vocalist from Haken, but do we know that the man has a softer side that yearns to create solo music?

If not, you will after listening to his cover interview this week, where Ross talks about his debut solo album A Shadow Of My Future Self, which is out now.

Rhapsody Of Fire also stop in to talk about their latest, and second chapter in their new trilogy, Glory For Salvation.

We feature new music from Animals As Leaders, Telltale, The Amity Affliction, Hammerfall, SIXX:A.M, Scattered Hamlet, Amaranthe, Suffocation, The Offspring, Unleashed, Setyoursails and Darkwoods My Betrothed, plus bring you the latest news from Underoath and the new Fender Acoustasonic Player Telecaster.

Our review team runs their ears over the new albums from Enuff Z’Nuff, Ad Infinitum and Pissing Razors, plus we welcome Coco Le Sex Bomb to the team with his review of the Townsville concert by WAAX.

In HEAVY Cinema, the big guns roll out, with a special interview with Mr James Bond himself, Daniel Craig.

We also speak to the stars of The Acid King and The Rumperbutts and bring you the new trailer for Spiderman: No Way Home.

Our review team casts their eyes over Zola, Blue Bayou and Last Night In Soho, so kick back, grab a coldie, and rock yourself into the weekend.