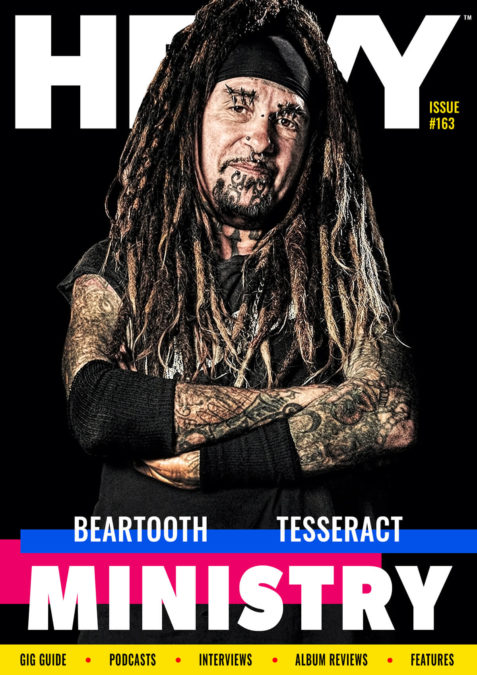 Things don’t get much bigger in the metal world than a new Ministry album, and with Moral Hygiene set to be unleashed on October 1 vocalist Al Jourgensen joined HEAVY for a chat about what to expect and 40 years in the industry!

TesseracT are set to drop P O R T A L S on August 27, with bass player Amos Williams giving us some of his time to bring us up to speed on that innovative release.

Beartooth released album number four Below towards the end of June, and bass player Ochie Bichar sent us in some words of wisdom to share with our readers.

There’s all the news on Mudvayne joining a US cruise, Black Sabbath‘s Deluxe Release of Technical Ecstacy, Groglords limited run of Deftones beer and the debut album from 12Gauge Rampage, plus Jimmy Glinster reviews new albums from hed (PE), Lord of the Lost and Fermentor.

In HEAVY Cinema we review The Suicide Squad, Till Death and Out Of Death, plus speak to the stars of The Killing Of America and The Misfits.

Venom: Let There Be Carnage opens soon, and we bring you the brand new trailer for that, plus the trailer for upcoming House Of Gucci.

It’s been yet another cracking week in the world of metal music so thanks for allowing HEAVY to share the memories and music with your life.