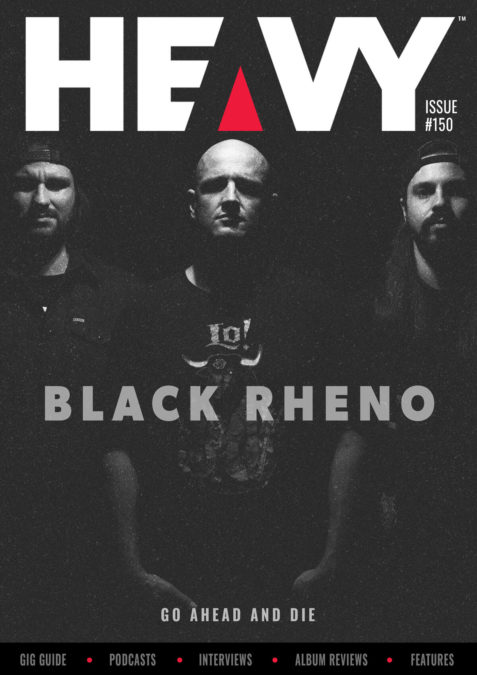 It is with pride this week that Sydney sludge metal kings Black Rheno grace the cover of the International DigiMag! These guys are hard-working and even harder playing legends so it is awesome to see them finally starting to get the recognition they deserve.

Vocalist Ryan Miller stopped by for a chat this week about their Battle Ready Tour and single and as usual, had a lot of entertaining stuff to say.

We also spoke with Igor Amadeus Cavalera about his new project with his father Max called Go Ahead And Die, with the younger Cavalera already a star in the making.

More Aussie legends in Hoss from Karnivool and the guys from In Hearts Wake also give us the lowdown on new happenings in their respective camps, plus we premiere the latest single from Our Last Enemy, “Decline Atrophy”.

There’s heaps of new metal tunes from the likes of King 810, Rise Against, Hacktivist, Atreyu, Oceans with Robb Flynn, Killer Be Killed and Go Ahead And Die plus we feature news on Decapitated re-releasing some old cassettes, Motorhead’s 40th-anniversary album and the acoustic Orianthi signature guitar.

We re-publish reviews of the new albums from While She Sleeps, The Offspring and Evanescence and in HEAVY Cinema Dave chats with Weston Cage Coppola and the star of June Again.

We review the latest movies Fatale, Cliff Walkers, First Cow, The Devil Has A Name, Twist and Rosa’s Wedding, plus fill you in on the upcoming Loki spectacular.

Make sure you check out your local gig guides because live music is slowly making a return. Last week I travelled to gigs in Sydney, Canberra and Melbourne so they are out there!