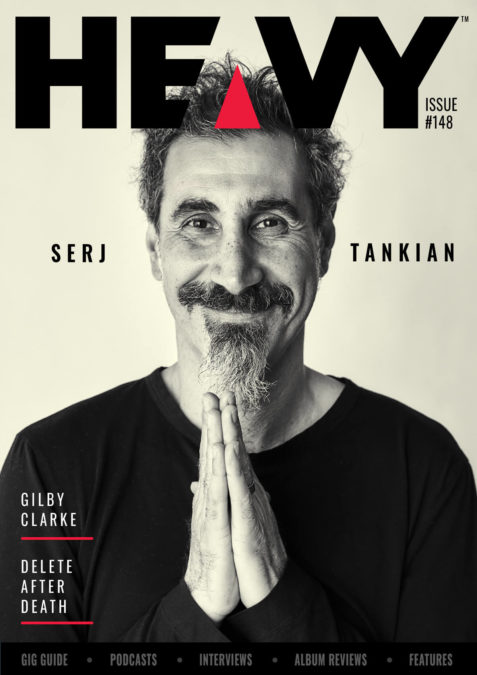 I hope you have set yourself a bit of time aside as you sit to read this because this is the biggest issue yet of the weekly Digimag!

Our cover story and interview is with the elusive Serj Tankian who opened up in an honest and informative interview detailing his current EP Elasticity all the way through to the future of System Of A Down. We speak with Gilby Clarke about his new album The Gospel Truth plus Delete After Death give us all of the latest on their debut single “Free Money”.

Dead Animal Assembly stop in for a chat, as do Featured, Revoid, Ivy Gold, Indoorsmen and Teenage Fan Club!

This week we feature two single premieres, “Pagan Spirit” from Warrior Within and “Vessels” from Kobrakai, while This goes To 11 with Mark Dalbeth rears its not so ugly head for another episode.

The heavy hitters have released new music, including Cannibal Corpse, Go Ahead And Die, Fear Factory, Escape The Fate, Danko Jones, Evanescence, Wednesday 13, The Heavy North, Empirical Prey, The Sight Of Impact, Vaiwatt, Thaeia, Delete After Death and One Morning Left plus there is news about the Mudvayne reunion, Massacre signing to Nuclear Blast, Skid Row‘s new album, Doug Aldrich‘s new radio program and The Screaming Jets celebrating their 30th anniversary of debut album All For One by going back to where it started and re-recording the album.

Evanescence’s new album The Bitter Truth gets the run over by Mitch Poland while HEAVY Cinema features interviews with the stars from Six Minutes To Midnight and  Moon Rock For Monday.

Catch the latest reviews for Mortal Kombat, The Unholy, Creation Stories and The United States Vs Billie Holiday plus we bring you the latest episode of The Popcorn Conspiracy.