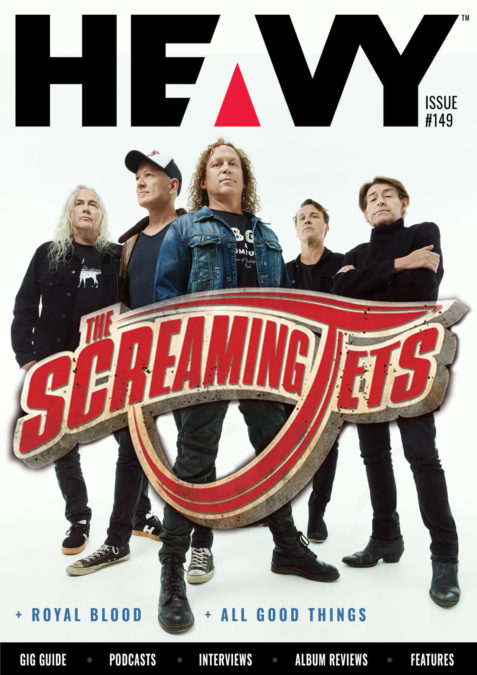 After 30 years in the music industry you would be forgiven for slowing down and rolling into your twilight years, living off past glories and basically going through the motions.

Not so The Screaming Jets who have celebrated the 30 year anniversary of their debut album All For One by re-recording the now classic album with the current line-up and repackaging it as a gift and thank you to fans.

Enigmatic frontman Dave Gleeson joined HEAVY for a chat earlier this to talk about the new version plus a few stories from the glory days of the Jets.

Royal Blood and All Good Things also stop by for a chat about their new music, while Australian outfit Carmeria premiere their latest single “Relinquished”.

We have a truckload of new music from Diskust, Evite, Like Moths To Flames, Buckcherry, Red Fang, No Hope For The Lost, Gone In April, Trove, Of Mice & Men, Ocean Grove, The L.I.F.E Project, Bodom After Midnight, All Against and Interloper and we review While She Sleeps latest album Sleeps Society.

HEAVY Cinema features the latest episode of The Popcorn Conspiracy as well as the latest reviews for Land, Thunder Force, This Little Love Of Mine, Run Hide Fight, Every Breath You Take and Promising Young Woman plus Guy Ritchie talks us through his latest blockbuster.

That should keep you busy for a couple of hours, but if not check out the web site for even more musical goodness.