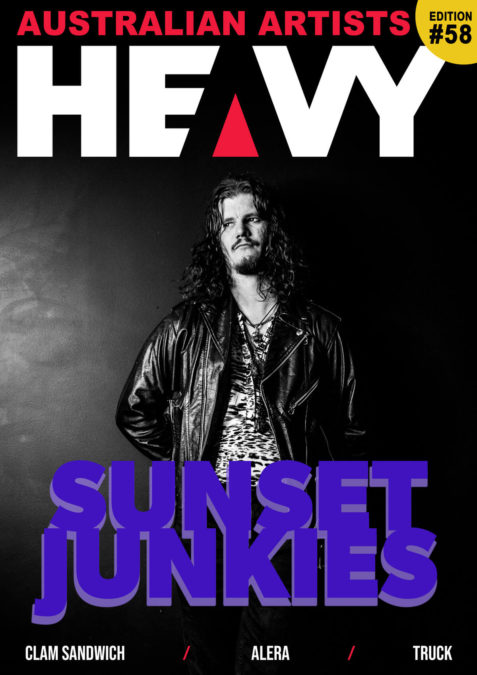 Firstly, allow me to apologise for the delayed release of both DigiMags this week. I bit the bullet and had my second shot during the week, and it put me out of commission for a couple of days…

The important thing is I am alive and back on deck, so without further bullshit please allow me to welcome you to this weeks Aussie Digi!

Sunset Junkies have earned the cover this week following the release of their latest album Darkness Visible, and, unfortunately because of my side effects, we had to conduct a Q & A interview, but it is still a great read so check it out.

Clam Sandwich, Firing Squad, and Zuko also premiered clips during the week, so have a listen to them, you won’t be disappointed!

On the news front, we bring you tour dates for Disentomb, the Brisbane comeback show for Helm, Halloween Hysteria‘s new date and new bands, how to enter the Wacken Metal Battle for a chance to play at Wacken next year, and details on a new event to hit the Mansfield Tavern early next year called Undead DownUnder.

There’s new music from Windwaker, Bobby Maguire, Luke Seymoup and Patient Lounge, plus we review the latest albums from The Last Martyr and Exhuminator and recap on the new one from Sunset Junkies.

That should keep you out of trouble for a bit.