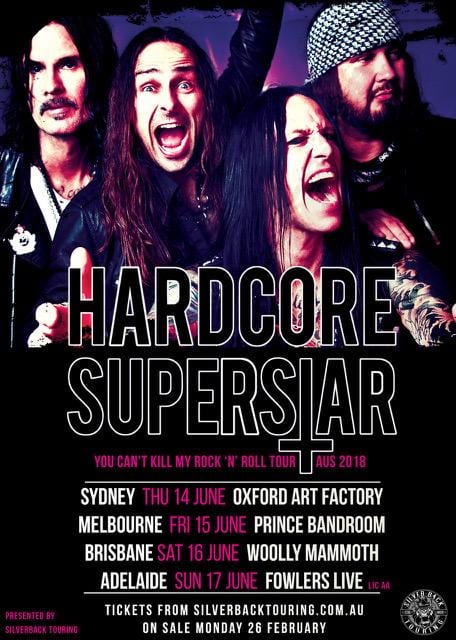 Sweden’s premiere purveyors of thrash metal meets sleaze rock, Hardcore Superstar will be touring Australia this June!
Having last toured Australia waaay back in 2008, HCSS are ready to make it up to their fans for a decade of lost time in a big way!
Fusing a base of hard, aggressive heavy metal with the catchy, melodic and decadent hard rock of glam’s glory days, Hardcore Superstar’s self coined ‘street metal’ is made for the stage!
It’s music from the heart. Fist pumping, anthemic rock with tasty licks, big bass and bigger drums!
The band will be bringing all their bombastic hits like Wild Boys, Beg For It, Above The Law, C’mon Take On Me that will get the room shaking as well as their expert level power ballads like Someone Special and Standing On The Verge which will have phones (and some old school lighters) in the air.
***
Busting out of Gothenburg with their 1998 debut album, Superstar gave a respectful nod to the generation of LA rockers who came before them while mixing it up with their current day contemporaries. The result was It’s Only Rock N’ Roll and it can be confidently called a game changer, giving birth to a whole new hybrid genre.
From there the band delved into the American classic rock sound of the 70’s paying homage to the bands that influenced the bands that influenced them!
Now armed with some vintage rock vibes to add to their thrash/glam arsenal, HCSS became an even greater force to be reckoned with, opening up for AC/DC across Europe.
By the mid 2000’s the band moved slightly away from their core sound and dabbled in some Brit rock and Misfits style punk before circumstances lead to them going on an extended hiatus.
During the break the guys worked on restoring a house that one of them inherited. Blasting out Appetite For Destruction, Dr Feelgood and Among The Living on repeat and with a cheeky grin, they knew what needed to be done.
They went back to their roots and refined their sound to be the bastard child of them all and that’s been the Hardcore Superstar way ever since!
With a their recently released single, Have Mercy On Me, from album number 11, You Can’t Kill My Rock ‘N Roll due in September this year, Hardcore Superstar in 2018 are as potent as ever.
Four tattooed guys in denim and leather, rocking out like brothers hellbent on a good time.
Come and join the fun!
TOUR DATESThursday, June 14: Oxford Art Factory, Sydney
http://bit.ly/hcsssyd
Friday, June 15: Prince Bandroom, Melbourne
http://bit.ly/hcssmel