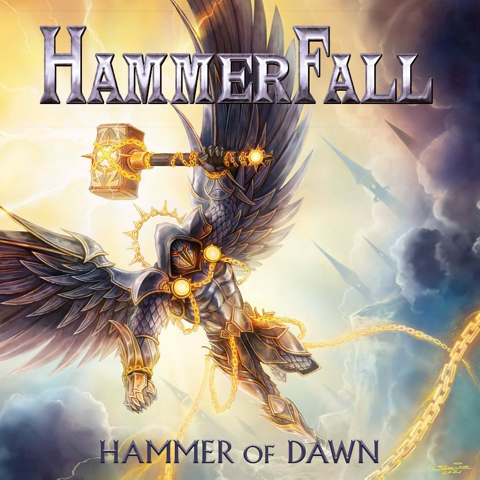 Swedish metal outfit Hammerfall may be preparing to launch their 12th studio album Hammer Of Dawn on February 25, but, up until this point, none of their releases have managed to invade my tender ears.

Hammerfall are a known, loved and respected band in the metal scene, so being the history buff that I am it is only fair that I give them an hour of my time to have a crack.

Album opener Brotherhood fires straight into action, pulsating guitar combining with double kicks and an instant feeling of belonging to any metalhead worth their weight in… well, metal.

Echoing the deep friendship of bandleaders Joacim Cans (vocals) and Oscar Dronjak (guitar) but also serving as a shout-out to their loyal Templars, Brotherhood is fierce, frenetic and powerful. Everything you want and expect in the first track on any album.

The twin guitar work of Dronjak and Pontus Norgren is an early feature, with solos beautifully punctuating the song throughout. It is evident that these guys are no slouches – any of them – and for once I find myself enjoying the almost hypnotic sensibilities induced by a power metal band.

Cans’ vocals perfectly complement that of the rest of the band, while chanting gang style vocals in the distance give a feeling of grandeur and scope.

The title track hits next, a sweeping orchestral style arrangement giving way to an almost battle march cry that once more conjures images of the days where swords ruled the land and power was gained through destruction.

Cans really hits the notes on this one, conducting proceedings in a calmingly reassuring manner that only serves to accentuate the musical mastery going on around him.

This track could almost feature in the next 300 movie, or any other battle torn spectacles that follow.

Once more guitar solos dominate proceedings and it is pretty easy to surmise that Hammerfall would be a treat to see on stage.

As if to prove my theory on Viking times, No Son Of Odin vows to defend himself in a faster paced yet still well-structured tune that allows Cans vocals to finally break free on their own merits. The music seems to be tempered somewhat here – but no less impactful – while the rise and fall of Cans delivery seems to ebb and flow in time with the conflict of the narrative.

That is until a nice drum fill introduces another guitar solo and once more Hammerfall are into the swing of things.

Venerate Me opens with a drum tirade before the chugging of guitars takes over and Cans takes the reins once more, his powerful vocals an instrument of their own.

This track features a special guest appearance from the legendary King Diamond, and it is perhaps testament to the respect commanded by Hammerfall that Diamond plays as part of the pack rather than putting his fingerprints all over the track, which, understandably, he is entitled to do.

That’s not to say his presence isn’t felt significantly on Venerate Me, but it is there more to enhance Hammerfall’s song rather than serve as a vehicle for one man and his guest appearance, if that makes sense.

Reveries is next to the plate, easing in with a chant of “na, na, na, na” that soon stirs the guitars into action and the “na, na’s” are dispensed to the bench.

This is a slow burning tune that flows at a measured pace and talks of dragons and other mystical creatures that I am guessing is what reveries are about?

Fuck knows, but geography was never my strong point.

The obvious statement of Too Old To Die Young is the next song, and as if to prove a point explodes with old school guitar riffs that would probably cause the premature death of any youngster foolish enough to try it at home.

By now Cars vocals – and I still maintain they are majestic – are starting to wear a bit thin on me, but considering this is six more songs into a power metal album than I have made despite numerous attempts to the contrary, that’s not a bad effort.

I should say here I am not really a fan of the almost too clean and soaring style vocals that generally accompany any power metal band. They just tend to grate on my nerves and have the opposite effect to which they are intended, but that’s just me.

In saying that, Cans is a brilliant singer that has kept my attention for longer than most.

Not Today has an almost bluesy feel to it, before sliding into my most despised form of power metal. The power ballad.

For the sake of keeping neutral I shall skip this one because as my dearly dparted Mother once said, if you have nothing nice to say…

She did alter the ending of that to something I should not repeat, but you get the picture.

Live Free Or Die makes up for the last song with a stuttering and promising intro that picks the pace back up again and once more takes us into the realm of traditional power metal.

There is nothing about this album that is bad and I’m guessing if you are already a Hammerfall fan then everything I say is blasphemy.

I can hear people already screaming “it’s power metal you bonehead, what did you expect”, and to those people I answer…

I expected nothing, but instead gained a valuable insight into the essence of power metal and I have to say as an overall package it is quite good.

This album is quite good.

But I likely won’t listen to it again, only because I don’t think I could listen and give it the true respect it deserves.

I was about to skip straight past Call Of The W.I.L.D after the intro, but I am glad I persevered because it switches tact before long and isn’t what I thought it was going to be.

Honestly, I am struggling as I get to the final track, No Mercy, but the opening drum roll into fiercely played guitar keep me interested long enough to finish.

This is actually my favourite track on Hammer Of Dawn, and I’m guessing it is another tale of battle based on the title alone.

So, here we are at the end.

What did I think? Well, that really doesn’t matter because power metal isn’t my thing so I have no right to expect others to form an opinion based on mine.

What I will say is this is a strong album musically and ticks every power metal box I know exists (which, admittedly, isn’t many). If it is any indication, I have never sat through a whole album of this style of music, so on that level Hammer Of Gods is a triumph of epic proportions.