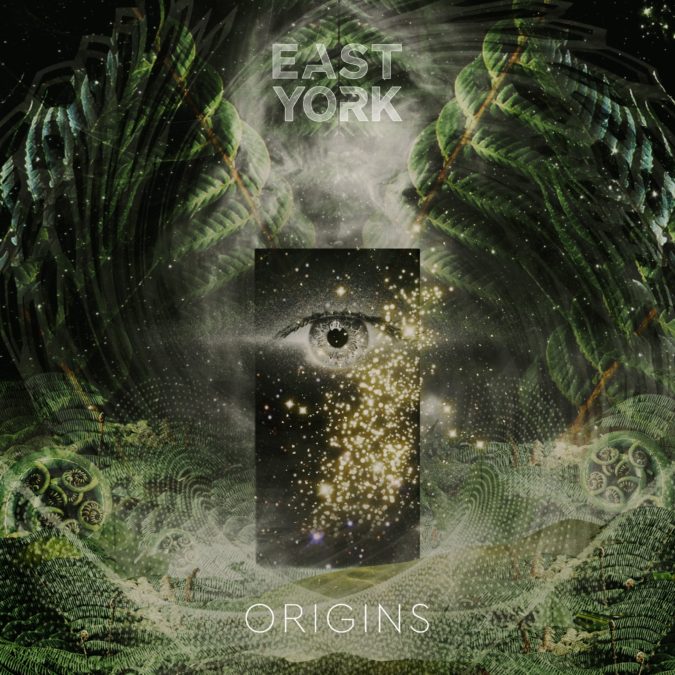 It’s been a long road to the release of East York’s debut EP, Origins.

What started in 2020 with a cracking debut single Outsiders soon became a patient waiting game as COVID lingered and strengthened, and East York kept waiting patiently for the right time to unleash their body of work.

Through drip feeding a further three singles – To Kill The Sun, Circus and Damned Anthem, East York ensured their music stayed fresh in the minds and ears of a music loving public that had become increasingly starved for choices.

After the cancellation or postponement of every show they tried to play to introduce fans to their live sound, East York have still yet to hit the stage (as far as I know, but I could be wrong), and as such have had to rely on the quality of their singles alone to paint a formidable sonic landscape of what they have to offer.

The wait is finally over, with Origins being unveiled last week, and trust me when I tell you the wait has been worth it.

Opening with a tidy drum solo from Zane Rosanoski (Mammal) which steadily builds to an almighty vocal scream from frontman Tarquin Keys (Logic Defies Logic), East York quickly settle into gear with opening track Outsiders, a hard rock infused rhythm section pulverizing from within as Keys effortlessly jumps between harsh and clean vocals, his voice almost an instrument on its own.

This is a subtle blending of accessible rock laced with a hard edged defiance that almost screams at you to actually TRY and make East York a radio friendly band.

It’s an interesting mix that reeks of a band who are comfortable making music that resonates first and foremost with themselves and if you choose to jump on for the ride expect a bumpy and turbulent journey that will leave you shaken yet somehow soothed.

The music ebbs and flows on the opener, seemingly showcasing every musical persona of the band in the introductory track.

As if to prove me wrong straight away, To Kill The Sun bursts into life, a swirling mist of aggression that pulls back every so often before countering with an uppercut that could have knocked Mike Tyson to his knees.

Rasanoski hits the drums as though they stole his lunch money, while guitarist Daz Coppins conducts the tempo changes with a deft stroke of his strings before pulling what could have potentially been a train wreck back into some semblance of cohesion that threatens to dissipate at any moment if allowed.

Bass player Eric Boucher keeps the balance somewhere between maximum overdrive and restrained anger, and for a band that is spread across two countries, the tightness in each track so far is nothing short of amazing.

Damned Anthem begins with an awesome guitar riff that swirls with a steady drum pattern before soon giving way to the most universally appealing track so far on Origins.

Keys seems to be singing within himself here, occasionally letting the beast out to play but for the most part singing in a soothing tone that is sporadically offset by more guitar riffs and solos that elevate the song beyond the confines of relative safety and once more proves that East York are definitely not going to be locked into one style of music.

Circus stutters into life, the echoed voice that only a megaphone can supply introducing something to an unseen mass of people before Keys regular voice takes over and the carnage begins.

Alternating between both vocal deliveries, Circus is an instantly catchy number that masks an underlying schizophrenic nature that sees Keys barking before pulling back momentarily before monstering the microphone with a sense of foreboding that would scare the pants off the children at an actual Circus.

Just as the song threatens to adhere to a set harsh/clean structure, the band pulls back momentarily, almost ominously, before picking the sonic attack up again, only magnified. There’s a shit tonne going on here, and for some reason Captain Spalding from The Devil’s Rejects keeps popping into my head…

That’s the four singles out of the way, and I’m excited to hear the two new tunes, starting with King Of Persuasion, and it doesn’t disappoint.

Rosanoski introduces the song by way of a thundering drum roll before Keys screams over the top and Boucher and Coppins face off in what seems like an all out war between the band members, each trying to decimate the other without dominating the playing field.

A well placed vocal interlude slows things down a notch, but only long enough for you to adjust your breathing apparatus before Keys continues his destruction to a slightly more measured rhythm section.

The song shifts gear without altering the delivery and by the time it finishes you could almost swear you have been through a maelstrom of musical venom that spits contempt from every angle. The guitar and drum dual to the songs finale would make a chaotic force on the live arena so here’s hoping one of East York’s planned shows manages to make it to an area near you soon.

Devil You Know pretty much picks up the sonic argument from where it left off in the previous song before both parties raise the white flag and realise resistance is futile.

This track has a nice build up and catchy bridge, the vocal war between all sides of Keys range raging once more before retreating to the comfort of cleans until eventually the angrier side of Keys vocals regains it’s fighting spirit. Boucher is given plenty to do on this song, the dominant notes of his bass controlling the track’s many ebbs and flows.

Origins emphatically announces the arrival of East York onto the world music stage and proves that some things are worth the wait.

Let’s just hope the boys had time to start on the next batch of songs in their downtime.