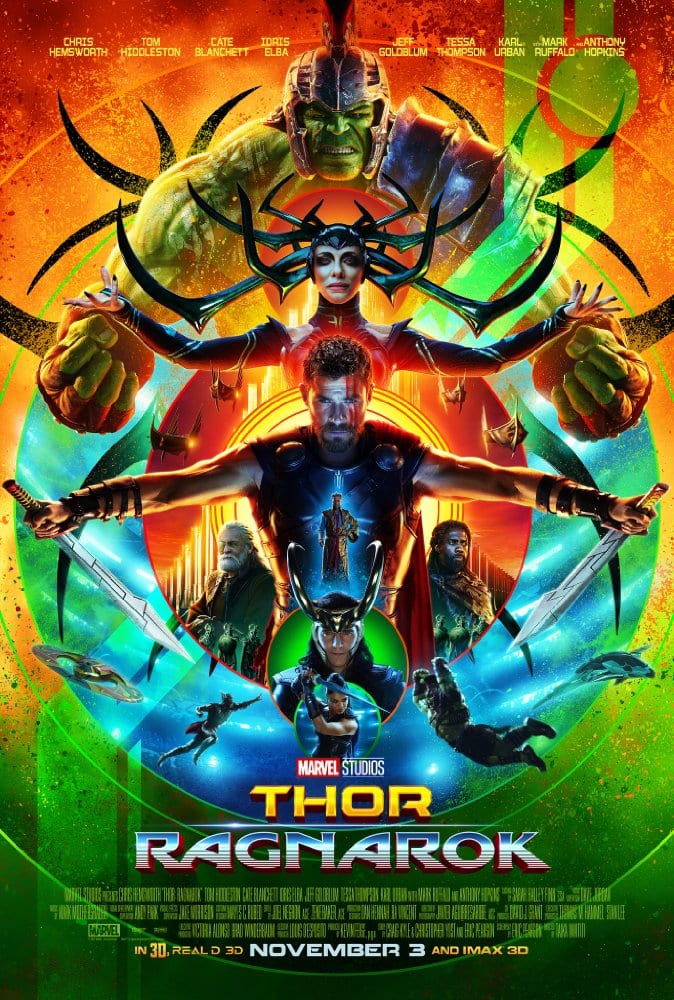 It’s never a pleasant experience when you are at the cinema, and you start shaking your head at the film that you are watching. Sadly, it was only a few moments into Thor: Ragnarok when I found myself doing it. I was watching what was supposed to be an intense scene: our muscle-bound hero, Thor (Chris Hemsworth – The Avengers, Ghostbusters), is hanging in chains looking like the end might be nigh as his nemesis starts ranting about how he is going to destroy Asgard. Then, all of the sudden, out of the blue, Thor starts cracking jokes about the chains making him turn around and around. BANG! The intensity is let down out of the scene like a car tyre being popped by the Hulk.

The humour in Thor: Ragnarok is going to divide audiences. Hell, at times, it even divided me. There were times that I had a good chuckle, but there were other times that just felt like director Taika Waititi (Hunt For The Wilderpeople, What We Do In The Shadows) forgot he was directing a Thor movie and thought he was doing a Guardians Of The Galaxy film. In case he hadn’t noticed, humour has been there from day one with Guardians, where as the first two Thor movies were pretty dark films. The fact that he tries to change Thor as a character from a brooding god to a guy cracking jokes every few moments really has to make you wonder whether or not he truly understood the material at hand. When you take into consideration that Thor is dealing with personal tragedy and trying to stop the land he calls home and millions of people getting killed, it makes his light-hearted side coming to the fore even less likely. Then there’s the character of Korg (voiced by Waititi himself), who I’m sure Waititi thinks will be the next Groot or Drax, but for most Marvel fanboys will be the Jar Jar Binks of the Avengers universe.

The saddest part about elements of Thor: Ragnarok not working is the fact that the film was set up with a pretty decent storyline to begin with. The film explains why Thor and Hulk (Mark Ruffalo – Zodiac, Shutter Island) were non-existent during the events of Civil War. As Thor battles personal grief caused by more treachery from Loki (Tom Hiddleston – The Avengers, Kong: Skull Island) he is suddenly faced by the arrival of Hela, the Goddess Of Death (Cate Blanchett – The Lord Of The Rings, The Curious Case Of Benjamin Button), who has a secret of her own and plans on ruling Asgard.

Thor’s first face-off with Hela sees him arrive as being cast-off onto a planet ruled by the flamboyant Grandmaster (Jeff Goldblum – Jurassic Park, Independence Day), where he is taken captive by Valkyrie (Tessa Thompson – Creed, Selma) and forced to fight in the Arena against The Grand Champion.

What makes the moments of ill-timed comedy seem even more out of place in Thor: Ragnarok is that Waititi does actually step up with some pretty amazing action sequences throughout the film. There was a small hint in Hunt For The Wilderpeople that action was something that he could handle, but that was nothing compared to the amazing Thor vs Hulk fight scene or the brilliant sequence of Hela taking down a small Asgardian army. It’s those moments, plus some touching moments between Thor and Odin (Anthony Hopkins – Hannibal, The Elephant Man) that make the film watchable and not a total write-off.

The film’s up and down nature continues with a very wasted appearance by Doctor Strange (Benedict Cumberbatch – Black, Star Trek: Into Darkness), yet the introduction of new and memorable characters like Hela or Valkyrie are done quite well. Albeit, again like is the issue with a lot of Marvel films, Hela goes missing for huge chunks during the film – normally when the action is concentrating on Thor vs Hulk. This means that no matter how good Cate Blanchett is in the role she will be remembered as ‘just another baddie’ in the Marvel Cinematic Universe.

The weakenesses of the film do let down the cast. Chris Hemsworth and Mark Ruffalo at times look awkward when having to deliver ‘comedic’ moments when they usually seem wholly at home with the character of Thor and Hulk. Cate Blanchett does do a brilliant job playing Hela – in which she is totally unrecognisable – while Tessa Thompson is so good as Valkyrie, you can only hope that her and her character are added to the Marvel roster. Coming out of the film also looking pretty good was Tom Hiddleston, who, while even though he was in cruise control for most of the film, is again a stand-out as Loki.

As I said earlier, Thor: Ragnarok is the kind of film that is going to divide audiences. The comedy does seem up and down, and while I laughed at some moments, at other times, as a hardened Marvel fan, I was wondering why the hell it was there. Just like Guardians Of The Galaxy Vol. 2, while the film was serviceable, I certainly don’t think Thor: Ragnarok will be as memorable for me as many other Marvel films.