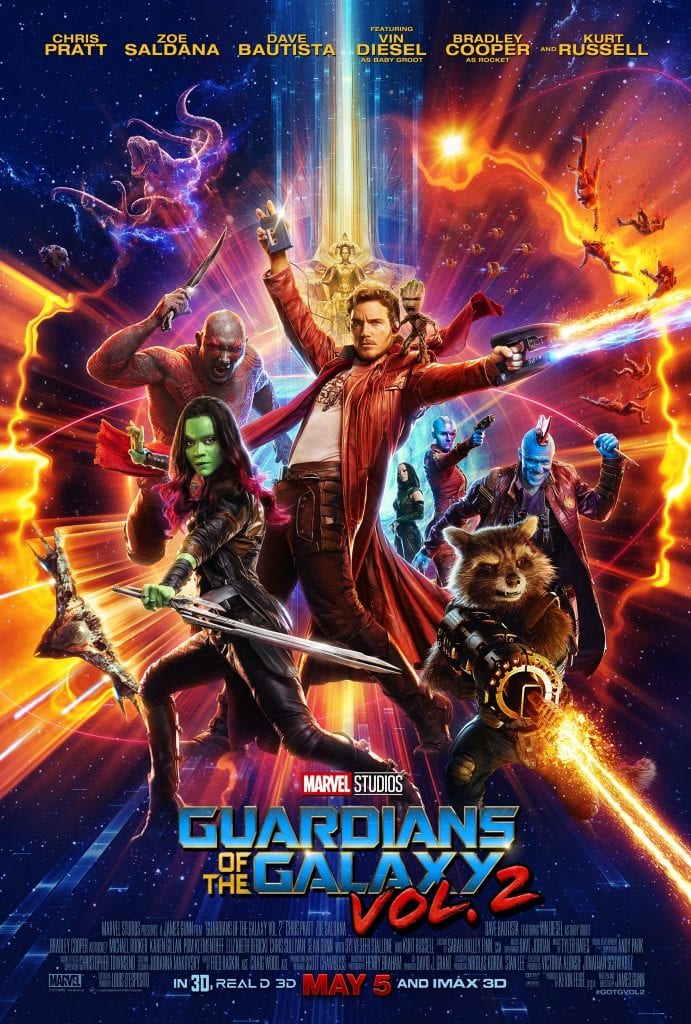 One of the biggest movie surprises over the past few years was the success of Guardians Of The Galaxy. When the film was first announced a lot of film fans… laughed. Aside from true comic book fans, most people were bemused by the first trailer that depicted a known comedic actor Chris Pratt (Jurassic World, Passengers) and a talking racoon. It had people scratching their heads… why would Marvel take a chance on a not-very-well-known series when The Avengers were raking in the box office dollars. The result was even more surprising – the film not only won over fans at the box office but also was critically acclaimed as well.

With all of that behind the franchise, there is little wonder that Guardians Of The Galaxy Vol 2 is one of the most eagerly anticipated films of 2017 and I’m happy to say that while it is very different to the original, it certainly won’t disappoint the hardcore fans.

Volume 2 follows on from the first film Star-Lord (Chris Pratt), Gamora (Zoe Saldana – Avatar, Star Trek), Drax (Dave Bautista – Spectre, The Man With The Iron Fists), Groot (voiced by Vin Diesel – Fast 5, XXX) and Rocket (voiced by Bradley Cooper – Silver Linings Playbook, American Sniper) are now fully-fledged and paid-up guardians of the galaxy. When a task they are hired for ends up them with being handed Gamora’s sister Nebula (Karen Gillan – The Big Short, Oculus) as a prisoner they believe they will just be able to cruise and pick up the reward. But no, their plans are spoilt because Rocket can’t keep his thieving hands to himself and soon they have an army on their tail.

After crash-landing on a planet, the crew are met by Ego (Kurt Russell – The Thing, Death Proof) who delivers a huge surprise to them and then takes most of them back to his planet – a place that they may never escape from. It is then left to Groot, Nebula and Rocket to team up with a recently dumped-from-his-crew Yondu (Michael Rooker – Cliffhanger, Jumper) to help rescue them.

Director James Gunn (Slither, Dawn Of The Dead) had an enormous task ahead of him with Volume 2. What he created with the first film was nothing short of brilliant so how could he possibly create that magic all over again. To his credit Gunn didn’t simply just re-do the original movie, nor did he completely re-invent the wheel, what he has done though is go back and really capture that 1970s vibe that has always surrounded the franchise… especially with its soundtracks. Somehow Gunn manages to bring in that 70s feel without the film ever feeling cheesy but also delivering the strong dramatic tension and amazing action sequences.

The thing that most stands out with Volume 2 is that Gunn has also created a sci-fi, action film with real heart. Without giving away a major spoiler, this is a film that explores family in a very touching way indeed – both with Nebula and Gamora and another relationship we won’t mention here. It feels weird to say that considering this is also a film that consists of a dancing baby tree and a wise-cracking racoon. Speaking of which somehow the screenplay also has some touching moments touching on why Rocket is the way that he is today. As a film it feels like Gunn has managed to somehow bring seriousness to a film that also consists of epic battles with Gods and space shuttle chases through asteroid fields… a real surprise.

The film also does what very few sci-fi actions are able to do and actually gives the actors a chance to act. Chris Pratt’s star should rise even further on the back of Volume 2… coupled with his recent performance in Passengers it really does feel like he is now capable of anything a director throws at him. Zoe Saldana also shows her worth with some touching scenes while Kurt Russell once again reminds us all that he is still a force to be reckoned with. With all that aside though this film belongs to Michael Rooker, the turn-around from villain to hero for Yondu from the first film to this one is virtually unheard of. Rooker owns every scene he acts in, and his performance is stunning.

In some ways Guardians Of The Galaxy Vol 2 doesn’t shape up to the original, perhaps the humour isn’t as spot on this time, but in other ways it surpasses it. The heart-and-soul of this film mixed with Gunn’s retro-style action makes for a very special film that will be loved by those who have claimed the Guardians as their heroes.