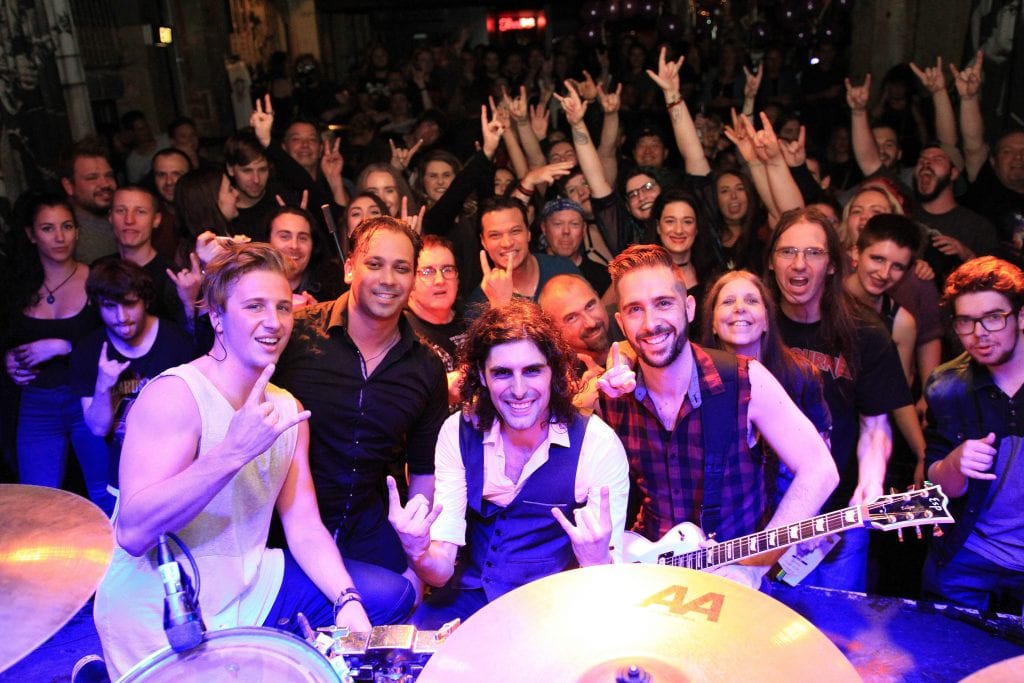 A packed, moving, grooving Cherry Bar on a Friday night is a special place to be. If it’s on your bucket list – the sooner, the better.

AC/DC Lane’s establishment is a hive of activity when you mention the word “music” – and Melbourne boys Lazarus Mode brought the house down on a superb Friday night. Launching their debut LP, “The Darkest Sun”, constant social media and poster promotion paid off in spades – the venue sold out.

BUY THE DARKEST SUN FROM THE LAZARUS MODE STORE OR ITUNES

Supported by Sonic Circus (The Hard Rock Show’s Jimmy Van Zeno the frontman) and Western Australian rockers Ragdoll, Cherry was flowing and fast filling up the floor by the time Sonic Circus stood up, plugged in, and introduced themselves to the world.

Jimmy can rock. Boy, can he rock. Slamming out a well-received, well-rounded, classic rock six-song set, Sonic Circus engaged the building crowd quickly. Opening with “Songbird”, there was no doubt Jimmy and his band members knew what to do. The highlight of the set was “Princess”, Jimmy bringing a great personal touch to the song.

Sonic Circus were tight, they were loud, and they were original – opening a night that had barely started.

Ragdoll are, in a sense, only new to the Melbourne music scene – they played their first show here in June of 2016. The second time around, it was stronger, harder, better. And the crowd – many of whom strangers to the trio with a psychedelic touch – were in raptures. Mixing the older tracks with titles from their “Back To Zero” album, guitarist Leon Tod, bassist and lead vocalist Ryan Rafferty and drummer Cam Barrett, as their song suggests, do enjoy a little bit of playing god.

It is very doubtful it will be the last time we see them either – “The Last Time”, “Shine” and “Save Me” all with a brilliant touch of soul behind them. The hard-edged, in-your-face rhythms put Ragdoll in a unique niche, perfectly combining tones that pull off brilliantly when on stage.

Then the main event. Everyone was ready. Amps, drums, guitar boards setup. The only thing missing? The headliners, Lazarus Mode. The blood, sweat and tears put into the production of this album have been highly evident from the beginning, once the band began dropping tracks on their SoundCloud page in the leadup to The Darkest Sun’s release. Vocalist and guitarist Jake James have put in countless of hours of dedication to get this right – and he has. So has the rest of the crew – Jay Pittas, George Gostich and Nicko Sinclair are the cogs in a rock wheel that literally exploded onto the stage with “Before I Go Insane” – oh, after a booming intro of course.

It’s no-frills, no-spills – instead, the ride Cherry got taken on didn’t stop. A 1-2-3 straight up serve of sublime shreds and vocals about experiences and hard work – straight at you.

Followed by “I Am Death” off the band’s debut EP, Ignite, from 2014, you had no time to breathe, only to head bang, jump, and sway, beer swishing side to side in your glass. And it wasn’t “One Last Try” either – these guys brought the real deal. Never mind Jay’s wireless compressor being “Poison Of The Land” – blink and the next song landed like a hurricane.

“We’re going to slow it down,” Jake says as they launch into “Few Steps Away”, the last song on the LP. That lasts for all of about two minutes until the song changes tempo and barrels into existence without warning.

“Ego Madness” and “Poison Of The Land” – the heaviest songs on the album – turn Cherry into a feeding frenzy – trying move is a challenge in itself. And then the group’s latest video release, “My Mistakes”, may touch on personal emotion – but boy, turn it into a rock song and everyone understands. And when the “Ego Madness” was launched – well, no-one cared about an ego, they cared about rocking it until the bar was closed.

Lazarus Mode are a band on a mission, not wanting to leave any stone unturned. Concluding with Ignite (which actually happened much, much earlier), they have given it their all and produced something special. They’re all proud of it too, the reaction with the crowd photo saying it all.