Film Review: Ant-Man And The Wasp 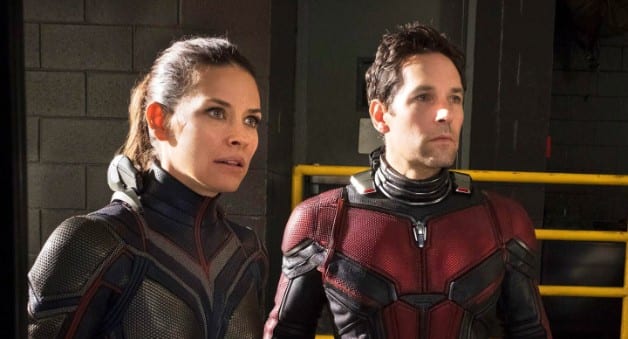 It might be a surprising comment to make but Marvel really had to come up with something special with Ant-Man And The Wasp. Not only because the original film was surprisingly good but because with the world still in raptures over The Avengers: Infinity Wars any follow-up that was sub-par was certainly going to cop a caning from both critics and fans alike. Luckily the writing team and director Peyton Reed (Bring It On, Yes Man) were up to the challenge and have managed to deliver a film that contains a suspenseful storyline, a little bit of humour and above all one of Marvel’s best teaser endings to a film so far.

Set just before the events of Infinity Wars the film starts with Scott Lang (Paul Rudd – The Perks Of Being A Wallflower, I Love You Man) serving two years of house arrest for teaming up with Captain America in his war that split The Avengers. All seems fine with Lang serving his time, except for boredom, until he gets a vision from Janet Van Dyne (Michelle Pfeiffer – Dangerous Minds, What Lies Beneath).

The vision leads to both Dr. Hank Pym (Michael Douglas – Basic Instinct, Wall Street) and his daughter Hope (Evangeline Lilly – The Hurt Locker, The Hobbit) that Janet might be still trapped in the quantum void. They recruit Scott to help rescue her but how does he do that when he isn’t supposed to leave home, and then to add to the challenges dodgy businessman Sonny Burch (Walton Goggins – The Hateful Eight, The Shield) wants to steal Hank’s shrunken lab for one of his black-market clients while the mysterious Ghost (Hannah John-Kamen – Ready Player One, Tomb Raider) is prepared to hurt anyone that gets in her way in order to get the same equipment for her own personal health.

Early on you find yourself how Ant-Man And The Wasp is going to live up the giddy heights of Infinity Wars but when you get your mind around the fact that this is a very different film you start to see the film from a different point of view. While Infinity Wars went for over-the-top action this is a more personal film. The relationships between characters here are explored in a way that most comic book films would avoid – whether it be Scott’s daughter coming to terms with her father being on house arrest or Hank doing whatever it takes to rescue his wife and mother to his daughter there are times when this film simply tugs at the heartstrings.

Having said that though this is a film that does deliver its action and suspense marvellously well as well. The scenes inside the quantum void look amazing and the suspense is delivered in small but enjoyable doses. Action wise the film delivers some great hand-to-hand combat sequences especially revolving around Wasp, while the highlight of the film is the car chases. Director Peyton Reed wanted to do something in this film that had never been done before and he delivers that with car chases that sees cars driven by Wasp and Luis (Michael Pena – End Of Watch, Shooter) repeatedly change in size which delivers some great shots of cars going over the top of over cars which are captured in some very creative ways.

As people who have read my reviews of Marvels films in the past will know I have been critical of Marvel and their villains in the past. Here, Ghost is a pretty decent villain. Skills-wise she is equal to both Wasp and Ant-Man which makes the fights interesting to watch, but her biggest weakness is also her biggest strength. While the fact that she wants Pym’s technology to save her own life means she is an almost formidable villain it does also mean at times that the audience also feels empathy for her… something that doesn’t always work in the filmmaker’s best interests.

The other big win for Ant-Man And The Wasp is the amazing cast. Paul Rudd really shines here. His ability to mix both drama and comedy means he frequently he owns his own film and despite my early hesitations when I heard he was cast in the role of Ant-Man he is certainly an action hero in his own right. His on-screen chemistry is sensational with Evangeline Lilly, while Michael Douglas and Michelle Pfeiffer are there usual brilliant selves. Michael Pena also frequently steals his scenes with some great one liners but even he doesn’t compare with the comedy of Rudd who you feel at times has been smart enough to ad lib some lines that not only work but catch his co-stars off guard.

While Ant-Man And The Wasp is very different to most of the other films in the Marvel universe it does work. It has its own style of action and drama and they work together really well. Throw comedy into the mix and you get a film that you feel is going to win over a lot of fans. What you will remember from the film though is the now-familiar Marvel mid-credit teaser, it is one of the best that Marvel has delivered so far and will you screaming “come on Marvel bring on the next one.” That teaser is one of the best cliffhangers in the franchise so far and just caps off a truly memorable comic book film.