Fighting The War With MAMMAL 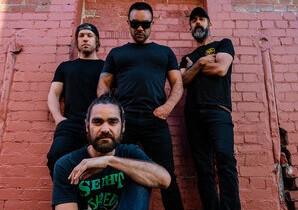 After a prolonged absence due to COVID, Australia’s favourite funk metallers Mammal have returned as only they know how.

With a statement of intent.

Mammal are back to point the funky finger of blame at those responsible for some of the atrocities of the world, with recent single Crime Scene introducing new bass player Kade Turner and proving Mammal have lost none of their angst and swagger.

This coming Anzac Day, April 25, sees Mammal release their next single The War, with the title telling you everything you need to know about the song.

It is a song that might surprise long-term fans of the band – but, I can assure you, in a very positive way – and dissects the many horrors of war and the ludicrous reasons given by the power mongers.

Put simply, it is pure Mammal with a fresh edge, and one which enigmatic frontman Ezekiel Ox was all too happy to talk about in another engaging chat with HEAVY.

“We had these two songs finished, and we wanted to get them out,” Ox began. “We felt like, when we suspended touring, we were going to focus on recording stuff, so this is just a two-song release. It’s two singles, there’s no album upcoming from this material. We have more material that we’ve been working on, and we will be moving on to the next step, which will be another album at this stage. We just wanted to get them out. We haven’t done anything since Kade (bass) joined the band, and it was a real opportunity to put out some tracks. We’ve got this great connection with a company in Glasgow with the lyric videos, and we just thought we would give people some content, and it was about time people started hearing how we sound post the line-up change – which it sort of feels like it’s over now. The first track has been received so well, and I’m confident The War will be received the same. It’s a very exciting time for the band. I really do think we’ve held onto the band’s DNA and I have mentioned that previously. The new songs will very much please old-school fans, but there’s plenty in there as well as far as progression in a lot of ways. Particularly in the way I recorded my vocals. I hadn’t had an opportunity to spend as much time on them` with a producer in the past. Mammal has always been running at a really frenetic pace, even when we got back together in 2017, we went and played London, we already had songs coming out, we were touring, and it was always quite chaotic. I think the pandemic has given us a chance to slow down.”

In the full interview, Ezekiel talks more about Crime Scene and The War and why the band chose them to kick-start the next phase of Mammal, reuniting with Jimi Maroudas and Tony Mantz on production and what it brought back to Mammal’s sound, the deeper meaning behind both tracks and how they condemn war and violence, the fresher elements to the two songs and where they come from, getting back out on the road and more.