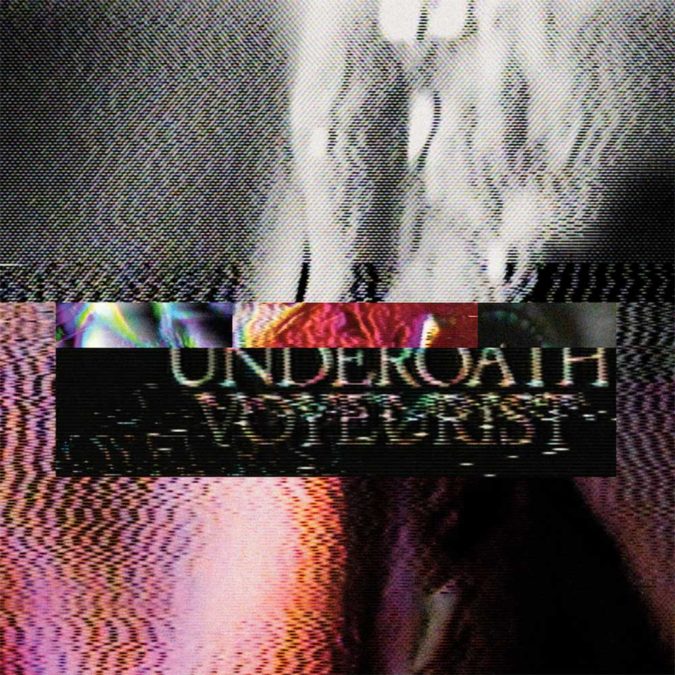 Underoath, a band that seems to have been around forever and one that I’m sure I’ve seen live several times over the years. With eight releases in tow, including six full lengths, I’m wondering why I’m not too familiar with them and why I can’t even name a single song by them.

Damn Excuses launches us into the album with some heavy chugs and tormented screams before busting into some solid groove which eventually leads into grainy yet melodic lyrical passages. It’s heavy, and it’s a good start to the album. Plenty of solid bounce throughout the track, with the shifting vocal tones moulding around the heavy riffs.

Nothing like a bit of gospel harmonies to kick off a track. That’s just how Hallelujah begins, and then it becomes some kind of melodic adventure that I wasn’t expecting. Quite a shift in tone from the opening track, as it slots in somewhere along the line of progressive melodic rock. Interesting track.

I’m Pretty Sure I’m Out of Luck and Have No Friends, true. But that’s not actually about me, that the very interesting title of track three. A track which commences with some sampled phone messages followed by a piano, drum and bass intro. What is this, some kind of weird Enya style pop track? I’m very confused right now, what am I even listening to? Not sure, but the last minute and a half gets pretty heavy and intense. I’m sure there is a good story behind this one, or at least I hope there is.

There we go, the band jumps back into some heavy groove as Cycle kicks off. This track contains guest vocals by Ghostmane and is so far the heaviest track of the album. Heavy, Groovy and Melodic best sums it up until we reach the interlude, which I believe is where Ghostmane throws in some gothic style vocals and raspy rap. That’s just a completely uneducated and uninformed guess, though.

This album is like a rollercoaster where you don’t know what’s at the next twist or turn. Thorn kicks off pretty heavy, and it seems like it’s just going to build intensity until it suddenly pulls back to the progressive melodic tones that we heard earlier in Hallelujah. It’s shifts back and forth between melodic and heavy and then rests somewhere in between for the choruses, which features some quite impressive soaring clean vocals. Further into the track, we hear some electronic elements not too dissimilar to that Enya track earlier.

(No Oasis) is up next, but there is not much to it, so let’s just move on.

Take a Breath takes the band back again to that progressive melodic rock feel, although it does get quite heavy and bouncy throughout the choruses and bridges. The verses remind me somewhat of a couple of well-known Australian progressive melodic rock acts, but let’s not get into name-dropping, shall we. Unless it’s Enya of course, which I forgot to mention for that previous not an oasis track.

I know some of you have been thinking this for the last two years of the filthy Rona, so the band ever so gracefully lets us know that We Are All Gonna Die. It’s a rocking, heavy track, and the lyrics really throw some big truths in your face. Probably my favourite track so far, even with another weird Enya bit in the middle.

It seems the band has saved really getting down to business until the tail end of this album. Numb is not a cover of the massive Linkin Park track, but it is a rocker of its very own, and to its own credit. Now that I’ve mentioned that Nu Metal band though, the track does have undertones and overtones of electronic throughout as well as a combination of vocal techniques not too unlike those of the heavy world’s most hated sub-genre.

I was hoping this album would end with a bang, but the last track Pnuemonia slows things right back down again as a slow ballad which shifts in and out of a noise track. The last minute or so does build back up to some heavy guitars, thumping drums and screams, but the journey to get there is a long one and the result doesn’t last long enough and just leaves you wanting more.

Very interesting album, with a lot of variation from track to track. In the big scheme of things, though, it makes about as much sense as that new one by Limp Bizkit. You know, it’s kind of cool, but a kind of weird mix of tracks, and not really what you expected. Not that I really knew what to expect to begin with, but it didn’t disappoint me, not in the slightest.

It’s a good album, but it’ll take a few listens to get used to, I’d say.