Don Broco are the most underrated rock band of the current decade, and if you’ve ever actually listened to them, you would probably feel the same way. The British outfit have been grinding over the past few years to build themselves up, but once you hear their music, it’s hard not to get involved in the hype surrounding them. Guitarist Simon Delaney had a chat with us to confirm that after releasing their acclaimed full-length Automatic last year, the band are indeed working on getting something else out.

“We are gonna drop a new record. We’ve been writing it for kind of like the best part of this year. We had a new approach to releasing music, we thought as soon as a song is ready, and if it’s good, we’ll put it out and hope that people can enjoy it straight away”. Their next LP is due out at the beginning of 2018, but they are going to continue “putting out music during the remainder of the year”.

So far this year they’ve dropped ‘Technology’ and ‘Pretty’, two singles that contributed to Don Broco’s presence in their own right. They’re both accompanied by polarising videos featuring violent face-swapping and alien invasions, an intriguing creative choice that begs the question of how they actually got approval in the first place.

“We’ve always been, as a band, signed to a major label. Up until like, a year ago”, Delany exclaims. “And when we were with the major label we never really were able to do anything too risqué, anything that might shock, or offend. And about a year ago we signed to a new label called Sharptone Records, who really embrace us in terms of our music and what we want to do in terms of creative vision”.

Timing wise, it’s interesting to consider that Don Broco’s hype pick up somewhat coincides with their release of more truthful representations of themselves, even when that means releasing a graphic music video or writing a song about their frustration with bros posting gym pics.

“I think people can tell when a band is doing exactly what they wanna do”, Delaney offers. “And I think that people want to be a bit shocked these days. You don’t want to watch something bland, and boring, you want something to kind of polarise your opinion one way or another…I think it probably has that kind of subconscious effect on people taking notice of the band, people talking about the band, because they’re saying: ‘yo, have you seen this fucked up video from this English band’”?

At the end of the day, Delaney would rather people hate Don Broco than not know them at all. With the new record’s release fast approaching, the band have also decided to take their chances with the Australian market and pop down under for a tour before the next album cycle kicks in.

“We were thinking about whether it was the right thing to do before the album cycle, but I think, well, I hope, that the shows will be busy enough and well attended enough that we get a bit of a buzz going in Australia when we come down in December. So when we do launch the album at the beginning of next year, we’re not starting completely anew”.

It’s not just wanting to build a foundation of fans that has Don Broco so keen to come down under. They’ve been touring with, and supported by, some huge names from the Aussie scene, including Hands Like Houses and With Confidence. “We’ve got loads of friends in Australian bands that are always telling us to come to Australia. They’re like ‘people there know who you are’”.

It’s clear that Don Broco have a bright future ahead, which is lucky for fans as well as members of the band. Despite the plans they have on the horizon, there is one thing that keeps driving Delaney, and it’s not a new album or Spotify streams; it’s the experience. 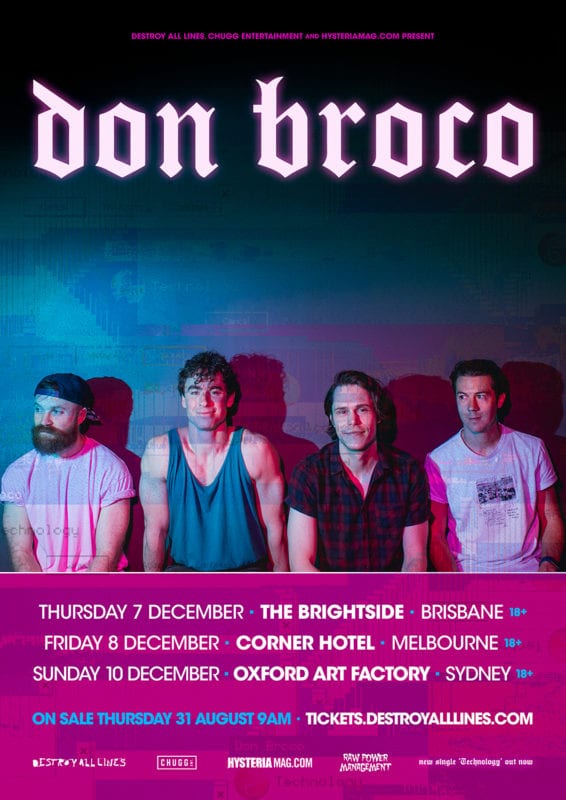