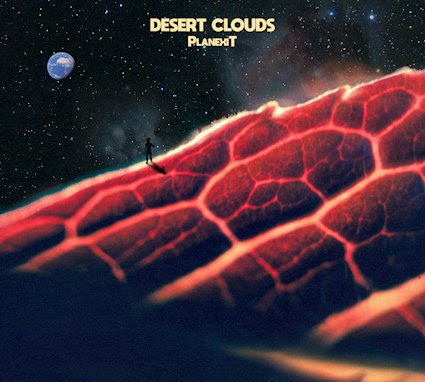 The temptations of nostalgia can be a bittersweet path to tread. The love for something from your past mixed with the hope that it can be modernised well enough to keep that romance afloat more than often leaves fans wanting. This can be especially true with rock music as bands attempt to refresh the sound of Led Zeppelin every five years or so only to be met with lacklustre fanfare and then disappearing back into obscurity.

Is this the path for London based Desert Clouds? The band promise a mix of 60s psychedelic rock with 90s influences on their album Planexit, the first to be released on their new labelmates Mandrone Records.

Summarised as “a journey throughout the inner side of the human being, represented by a nameless man who is trying to escape the surrounding environment that overwhelms him”, the cover art features a silhouette on orbit upon a celestial rock with Earth floating in the distance and this image is already enough to colour me intrigued.

The title track kicks things off with an exceptional pace. Planexit is an open letter to Mother Earth, penned through melancholic self-pity, and fuels things off with catchy riffs, multidimensional rhythms and wailing melodies.

The track concludes with a pan flute outro, allowing the atmosphere to settle the seven-minute opener with an excitement for what’s in store for the rest of the album.

A grunge inspired bass riff leads the next track, named cheekily with the portmanteau Mamarse. The mood is heightened to an up-tempo mosh with crashing drums, biting guitars and growling vocals. Taking notes from Soundgarden and beckoning a chorus that Eddie Vedder would be proud of, Desert Clouds are two for two in keeping fans of their respective influences pleased.

While the drums bring thunderous momentum to Wheelchair as they work together to close out the gloomy track with a giant wall of sound, the true force of the band’s musicianship is on full display in the epic Staring at the Midnight Sun. Sludged guitars and booming rhythm complement the introspective lyrics well throughout, before one hell of a dismount.

The southern rock sounds of Deceivers assures that the band are masterful in what they set out to achieve…an atmospheric and rocking soundtrack to a new-found dystopia. The experience of blissful solitude is strong in this track.

Planexit finishes with the awe-inspiring Speed of Shadow, which revels in glorious progressive rock guitars and thumping drums, as well as featuring a thorough and majestic middle section. A strong finish to a high quality release.

The genre hopping of 60s psychedelic rock and 90s grunge is balanced tremendously, and Desert Clouds have succeeded in keeping their psych rock roots alive while maintaining originality in outstanding and dynamic songwriting. If you’re looking for a solid musical companion to experience a trip with, look no further than Planexit.