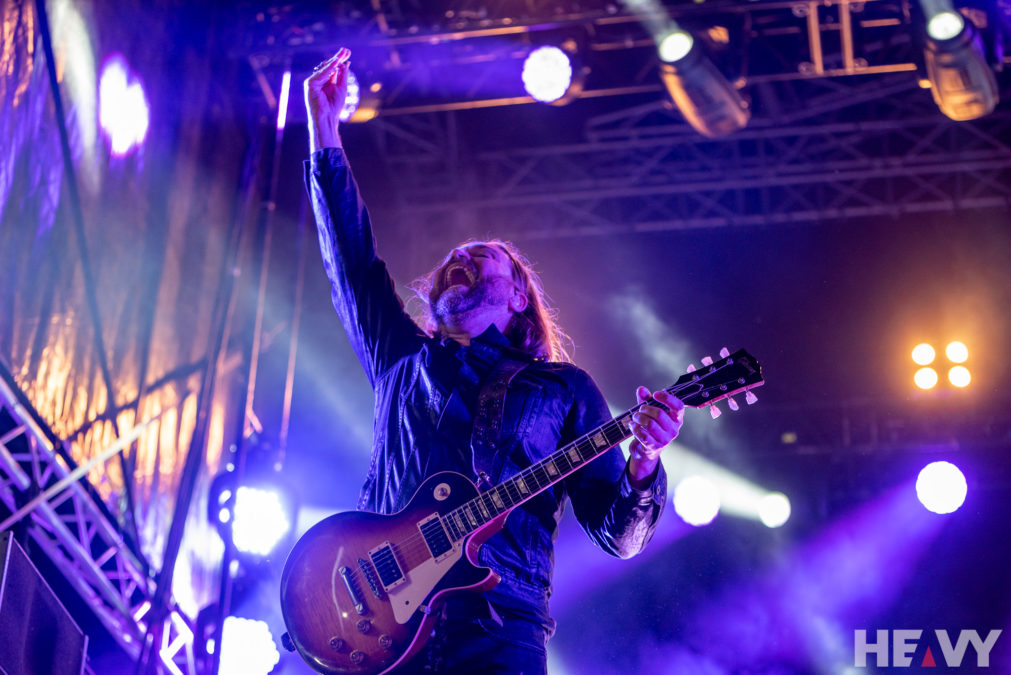 In a time when all industries have been hit hard by Covid, none have suffered more than the
live music scene.

The Under The Southern Stars festival series has been one which has defied all odds through patience and resilience, triumphantly fighting its way forward after multiple postponements, challenges and setbacks. To actually step through those festival gates was a surreal moment of joy and exhilaration – Australia would finally have its first International Festival in over 2 long years!

Maitland Showground was a beacon of sunlight and smiles as it welcomed a stream of patrons to the maiden show of the tour. After all the recent rain and flooding, no amount of mud would stop these music lovers from enjoying a fun day out, with most punters opting for a camping chair and picnic rug.

Kicking off proceedings were Aussie rock legends Rose Tattoo, who were promoted to open the festivities after Electric Mary were a late scratching due to Covid amongst their camp.

Consisting of a star-studded line-up including the likes of ex-AC/DC bassist Mark Evans and former Skyhooks and The Angels guitarist Bob Spencer, Rose Tattoo stood out from the outset. Lead by the iconic Angry Anderson, whiskey in hand, he cheekily asked the audience if he was allowed to say “Fuck” this early in the day? Rose Tattoo powered into a plethora of hard rock riffs that got bodies moving, covering all the classics from a catalogue spanning almost 50 years, including We Can’t Be Beaten and Bad Boy For Love.

San Francisco’s Black Rebel Motorcycle Club joined the bill after Live had to pull out from the festival. Four years since last performing in Australia and celebrating 20 years since their self-titled debut album, the 3-piece immediately showed why they were added to the lineup.

They mesmerised the audience with their wide palette of sounds spanning psychedelic, indie and alternative rock. Infectiously groovy and instrumentally diverse, they delivered a sonically amazing performance that would not be forgotten quickly.

One of the main drawcards on this star-studded lineup had to be the legendary Stone Temple Pilots. The San Diego quartet making it well known that they have missed Australia since last touring back in 2010. Sadly, with the passing of iconic frontman Scott Weiland back in 2015, the band has had many evolutions to fill the void left by such an amazing voice.

Opening with Wicked Garden, fans could immediately see why this talented vocalist is fronting the band, channelling all the energy of Scott’s spirit whilst bringing his own flavour of pure rock and roll. Jeff also reminded the crowd this was his first time performing in Australia.

STP powered through a set full of classics including Plush, Interstate Love Song, Trippin’ on a Hole in a Paper Heart, Dead And Bloated and Sex Type Thing plus many more spanning their illustrious career. Even throwing in some newer material from their last self-titled record such as Meadow, the crowd lapped it all up. Looking around, every STP fan was engrossed in singing and dancing along to every word of every song, with a grin running from ear to ear.

Next up, British alternative rock pioneers Bush immediately powered into their catchy riff-driven anthem Kingdom. Even though Gavin Rossdale is the sole remaining member from their original lineup, the band constructed quite an energy and wall of sound that was consistently motored throughout their set.

The allure of Gavin was hard to ignore as he gracefully glided across the stage to an adoring crowd.

Performing classics such as Machinehead, Everything Zen and intimately reprising Glycerine it was a joy to behold. At times, Gavin did feel a bit under-rehearsed, and struggled vocally as the set progressed. This was however understandable considering the lack of opportunities to perform and rehearse live music. Turning the microphone to the audience, they gleefully assisted him with the beautiful chorus of Come Down. An entertaining and energetic performance nonetheless.

Finally, Chicago rock legends Cheap Trick, a band renowned for their dazzling bravado and unparalleled musicianship, marched on stage to close the event’s proceedings. A band that many would feel privileged to experience live in Australia, and they did not disappoint.

Opening with I Can’t Understand It, the band showed even after 50 plus years at the top they can still match it with the rest. Highly contagious with their fun sense of fashion, they provided a master-class in rock n roll. The audience were spoiled with all the classics including Dream Police, I Want You To Want Me and 80s power ballad The Flame.

A perfect way to finish a great day of live music.

Massive thanks must go to everyone involved in making this festival a possibility. It was certainly an encouraging sight to see people united in working to rebuild the festival scene after many long years on the sidelines. The crowd must also be commended for their exemplary behaviour on the day. Being separated from live music for so long has been incredibly difficult, but this day revealed a very grateful, considerate and welcoming community who were rewarded with a truly memorable experience.