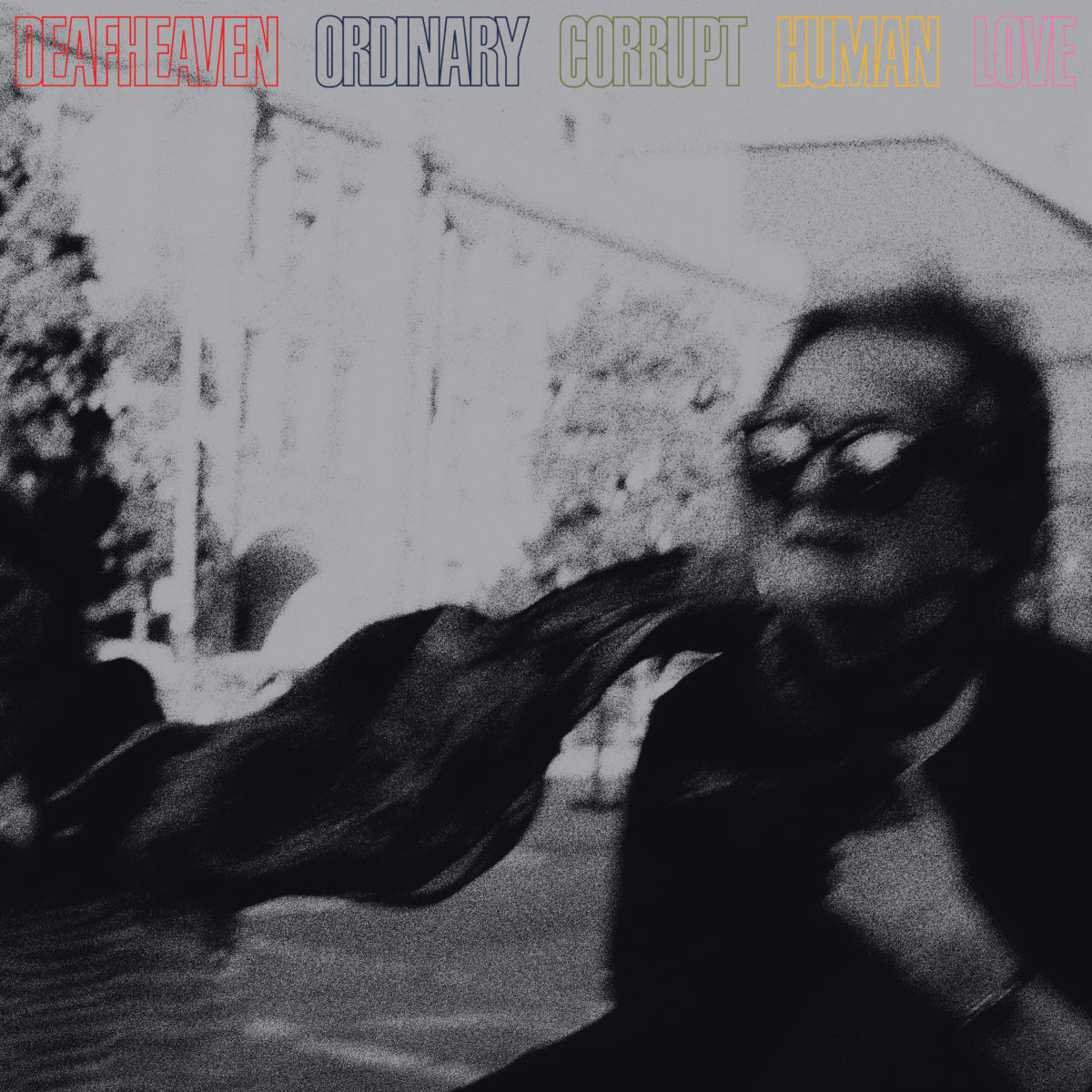 Deafheaven… the band that almost tore music apart through their explosion onto everyone’s speakers with their 2013 sophmore release, Sunbather. Only then to take the music scene by storm once again with New Bermuda. Both albums are steeped in literary romanticism, then enveloped in a veritable cacophony of shoegaze, screamo, noise and garage rock and black metal. A combo that is hard to come by, let alone done so beautifully. Now, Deafheaven are back at it again with their latest release, entitled ‘Ordinary Corrupt Human Love’. So how does ‘Ordinary Corrupt Human Love’ stack up against their stellar back catalogue? Let’s dive in!

Opener, ‘You Without End’ heralds the start of this masterpiece of an album. Piano melodies converge with Dan Tracy’s laid-back groove and the swelling of Kerry McCoy and Shiv Mehra’s guitars, until vocalist George Clarke unleashes his unhinged shrieks across the musical canvas. The track rises and falls through garage rock stylings and black metal tremolos until we see the track fall away piece by piece and take us into the lead single, entitled ‘Honeycomb.’

‘Honeycomb’ launches straight out of the gate with Clarke’s howls leading the musical charge, a far more monstrous affair than ‘You Without End,’ yet still steeped in lighter moments ‘Honeycomb’ showcases the band’s ability to blend genres like no one else does – Blast beats compliment post rock riffing, while we see McCoy’s garage rock style and Johnny Marr influenced leads sit beautifully over the top. From 7:30 onwards we see the outro of the year, with the track shifting gears and slowing right down, as McCoy raises the simplest of melodies through the outro and commands the track to an incredible close.

Up next we have the latest single, ‘Canary Yellow.’ The song follows the familiar peaks and valleys of Deafheaven’s discography, all the while pushing them into new territories, with garage rock tinged leads colliding with shoegaze to create an incredible warmth to the track. Following this, we get some relief from the harshness of the first half in ‘Near,’ in which we get to hear George stretch his clean singing chords. The track comes at a perfect time, easing the raw emotion Deafheaven have pummelled at the listener.

‘Glint’ leads us into the second half of the album, building and swelling until the band fire into what the San Francisco night must sound like if it was music. Blast beats and huge walls of tremolo guitar propel the track with unabashed fervour, combining with George’s shrieks to create a beautifully chaotic cacophony of melody and intensity. ‘Night People’ follows ‘Glint,’ where sombre piano and the pulsing heartbeat provide the perfect background for Chelsea Wolfe to join George in a harrowing duet. There are so many hidden layers in this track that with each listen you begin to pick up distant howls and guitar lines every time.

‘Worthless Animal’ closes out the album in style, manifesting and finishing in the grand opulence and shimmering beauty of despair and anguish, all while being effortlessly romantic in doing so. McCoy’s use of effects and ambience throughout the track mesh with Tracy’s flourishes across the drum track perfectly compliment the gloom that shrouds Clarke’s vocal performance across the track.

I’d like to address the elephant in the room, Ordinary Corrupt Human Love has the ability to surpass both Sunbather and New Bermuda in becoming the Magnus opus of Deafheaven’s discography…and it does. Every swell, every peak, valley & shriek feels so natural and filled with an emotional purpose. Deafheaven manage to capture the lush grandeur that is Sunbather, the gritty hallmarks of New Bermuda and bring in so many new musical mile markers that in any other band just wouldn’t work. All while delivering it with a healthy dose of literary delights. Ordinary Corrupt Human Love showcases that, and in doing so creates an album that can be described in two words as ‘hopelessly grand,’ bleak yet beautiful. This is a complete 5 stars and is the album Deafheaven should be known for. Every single performance on this album is exquisitely crafted and damn…I absolutely f*cking love it!

PrevPrevious.GUN at The Foundry, Sheffield, UK on 29/6/18
Next.DEVILDRIVER ‘Outlaws ‘Till The End, Vol. 1’Next