DEVILDRIVER ‘Outlaws ‘Till The End, Vol. 1’ 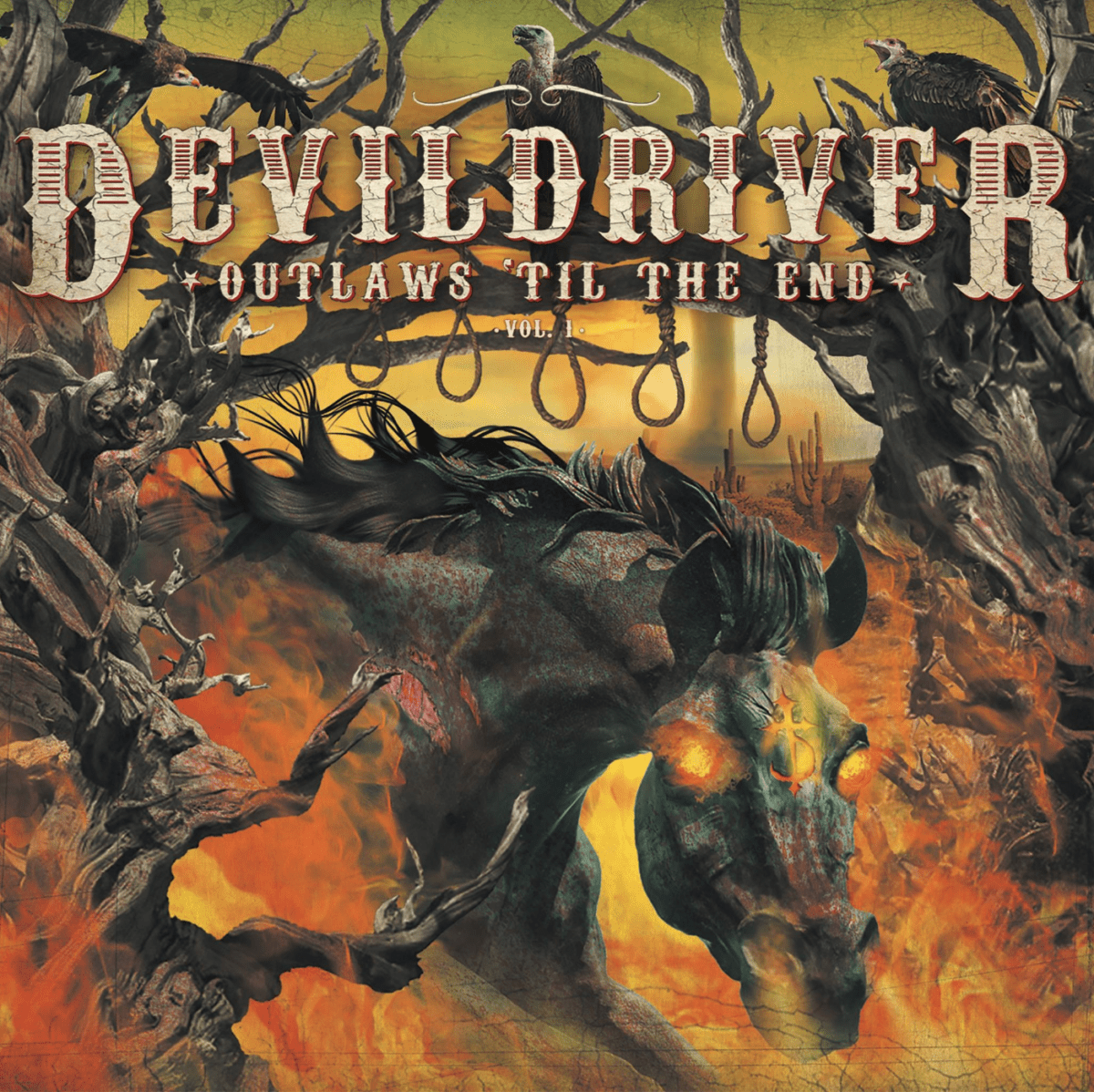 Fast forward to now over a year later and the announcement somewhat faded from memory, Outlaws ‘Til The End, Vol.1 hit Spotify playlists everywhere. Now I must say, cover albums are not a new concept, but a cover album based entirely around outlaw country songs? A challenge for even the most talented genre-benders. A truly great metal covers album requires capturing the true original spirit of the song, but also delivering something fresh and heavy – will DevilDriver deliver?

Two years after their successful seventh studio album Trust No One, which performed exceptionally well on most alternative charts, the DevilDriver boys prove they come from thoroughbred metalcore stock and know how to compose a blistering song. So perhaps they can pull it off.

Overall, the album is fantastically produced, considering the complexity created by the range of musicians and vocalists appearing in the album. It’s not surprising since the album was produced by metal wizard Steve Evetts (of Architects, Suicide Silence and The Dillinger Escape Plan production fame). The guitar mix seamlessly blend bold metal riffs with classic country slide guitars. Drums are powerful but not distracting, perhaps a little too discreet for my tastes. Vocals are exceptionally crisp and the distinctions between the country guest vocalists like Hank Williams III is absolutely on point. Throughout the album Dez Fafara demonstrates new vocal versatility, exercising extremely meaty vocal licks while meshing fearlessly with his country counterparts. Yet Fafara’s amnesia inducing tones make you almost forget these are actually country songs. Listening to the album I was taken on a journey through cactus riddled desert, the stench of whiskey stained bar stools and sand smashing my face on white knuckle horseback rides across dunes being chased by Indians.

The track listing represents a solid 12 tracks of full on country songs. But not a Dolly Parton in sight, the artists represented on this album are the musical trailblazers of their time, pushing the boundaries of their genre and unapologetically badass. It’s easy to take these iconic and influential songs for granted, so hopefully their reinvention will breathe new life into them.

Opening with the sultry, bluesy notes of Straight to Hell’s, “Country Heroes”. I’m drawn in by the ambience, surprised by how similar the track is to its original. 30 seconds in, the overdrive guitar slide signals the onslaught, bringing in a musical banquet with crunchier tones than a packet of doritos at a 5 year olds birthday party. The drums are meaty yet understated, leaving room for Mike Spreitzer to shine with his country slide guitar solo. Fafara’s vocals mixed with Williams III, make for a strange combination, a bastard son of metalcore and country (countrycore perhaps…have I just invented a new genre?)

Track two decimates your ears with the unmistakable Randy Blythe scream opening for Willie Nelson’s “Whiskey River”. Elements of thrash and speed metal, definitely further away from the the country feel in the first track, fans of Gojira and Lamb of God would dig this track harder than Trump digs Ivanka. Relentless blast beats and double kick drumming and harmonised guitar licks featuring Lamb of God’s Mark Morton, simply don’t let up. The track grabs you by the scruff of your neck, shakes you about for three and a half minutes, just long enough before you pass out from holding your breath.

Following with another strong re-imagination of The Eagles’ “Outlaw man”. A strong choice and those familiar with the original can almost already see it translated into a groove metal mosh fest. The respect that DevilDriver have for The Eagles is evident throughout this track, nailing each riff as if it were their own, they even nail the tempo change at 2:14.

Yippie yi yay! Probably most famously sung by Johnny Cash, the obituary to Stan Jones’ original “Ghost Riders in the Sky” from 1948 has been re-recorded by over 50 different artists, each putting their unique spin on the track. Yet the DevilDriver version seems more special somehow, guest appearances by Cash’s son himself and Blythe again create complex vocal layerings and haunting harmonies.

Probably my favourite track from the album, “Copperhead Road”, is a near perfect reincarnation. Clear, fast and bright guitars with that classic banjo riff (perhaps a little low in the mix) pump the song full of energy. This track captures the unmistakable soul of the Steve Earle’s original anthem and perfectly frames the old familiar with a new metalcore sound. Of course the song is helped along by the intensity of 36 Crazy Fists vocalist Brock Lindow.

DevilDriver have done themselves a definite favour with this album, somehow managing to blend nostalgia with their distinct heavy. Outlaws ‘Til The End, Vol.1 is the perfect album following a night of metal, you and your pals have had a few whiskeys and want some tunes to be able to instantly sing along to.

Honestly, now I’ve gone back and re-listened to some of these classic country tunes with a newfound appreciation. So back to the question I asked earlier, have DevilDriver managed to pull this album off? They have absolutely nailed it.