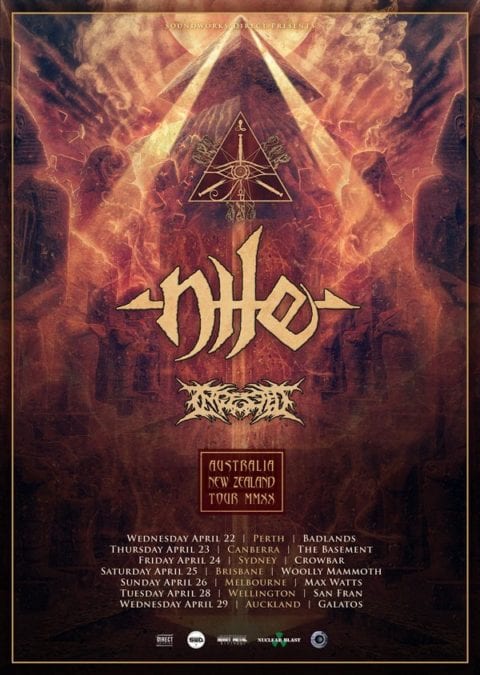 Using ancient Egyptian history, Middle Eastern mythology on the work of HP Lovecraft for inspiration death metal outfit Nile have been building up an impressive back catalogue of music since the early 1990s. The band are now preparing to returning to Australian shores and this time they are bringing with them UK self-proclaimed Kings of Slam Ingested.

“We’ve know Brad and Dysie from Soundworks for a long time,” says founding member Karl Sanders when HEAVY Mag gets a chance to sit down and have a chat to him about the tour. “So through that connection that is how it happened. We always love heading back to Australia and they are the guys to make it happen.”

As we talk about the number of Australian fans that Nile has attracted over the years Sanders gives a little laugh. “We are very thankful that our Australian speak English,” he says still chuckling. “That just makes it so much easier. But what I have seen the four or five times that we have been to Australia is that Australian fans are just such awesome metal fans. They are a kind of interesting lot because they have their own brand of crazy. It is not the same kind of crazy as South America crazy or English crazy or American crazy, it has its own flavour.”

Unlike a lot of times when two bands come to Australia together because they have known each other for a long time Nile and Ingested also have never met. “We don’t know them,” says Sanders again laughing. “We have never toured with them but we are looking forward to meeting them and looking forward to being able to share a stage with them.”

That leads me to ask what Nile are like when they are touring with another band for the first time – do they get excited about it or does it make them nervous. “See, here’s the thing,” says Sanders. “We are fucking fearless when it comes to other bands. We don’t worry about them, we don’t even fucking think about it. I remember the first time that we toured with Cradle Of Filth and I think it was 2003. I remember don’t even caring that we were with a band that was much bigger than we were or much different then we were.”

“I remember not even caring because I knew what we could do, I knew what we were all about so I didn’t even worry,” he continues the passion clear in his voice. “Then Dani Filth invited us to come onto their bus, to sit in their magnificent tour bus and hang out and he made the joke to one of his band members ‘This is the support band.’ and they were as cold as ice, nothing was even phasing them, they didn’t even blink an eye. So what does that mean? I don’t know what the fuck that means except we know what we can do so we don’t even worry about the other bands.”

Since their start in 1993 Nile have released nine studio albums including the sensational Vile Nilotic Rites which was released last year. Sanders says that now makes touring to a country like Australia that visit rarely more interesting when it comes to picking a set list. “When you play in a marketplace that you play in multiple times during a touring cycle, your main marketplaces like America or continental Europe, then you a have to give them something different every time, you have to mix things up a little. But when you come to somewhere like Australia where we only get to come to every few years then we have to give them the greatest hits package because the fans don’t get to see us all the time and there are songs that if we didn’t play the fans would throw rocks at us, so we have to play those songs.”

Sanders is also quick to admit that the new tracks from Vile Nolotic Rites have also quickly become live favourites. “It went even better than we hoped,” he explains. “The audiences everywhere have reacted extremely well to the new songs…. I have been absolutely blown away.”

Chatting to Karl Sanders makes we sure of one thing – Nile are going to deliver an absolute killer set in Australia, so make sure you aren’t dumb enough to miss it.

PrevPrevious.CORROSION OF CONFORMITY, Pepper Keenan Delivers a Promise with the Upcoming Oz Tour, “We are Not Coming Down There to Fuck Around!”
Next.More Acts Added To This Year’s DOWNLOAD FESTIVAL UK Line UpNext