CORROSION OF CONFORMITY, Pepper Keenan Delivers a Promise with the Upcoming Oz Tour, “We are Not Coming Down There to Fuck Around!” 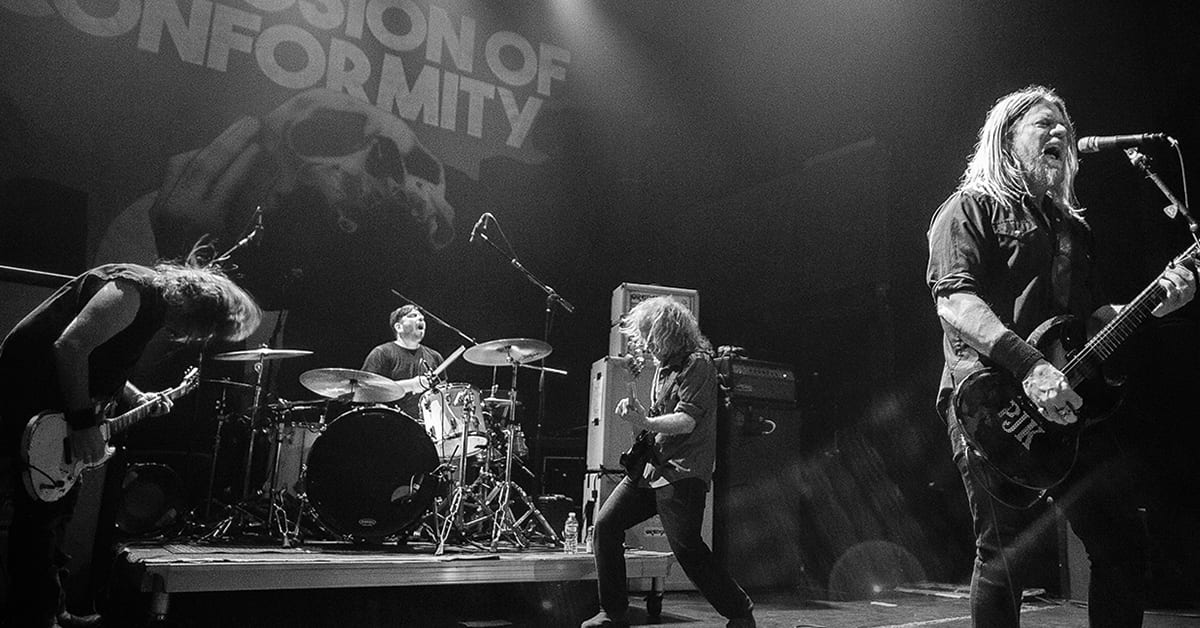 I have been a fan of Corrosion Of Conformity for nearly three decades. I first heard them with the release of their sophomore album being 1991’s Blind. CoC were all killer no filler from the opening note on “These Shrouded Temples” to the closer “Echoes In The Well”. Blind came about at a time in heavy music where there was a new kid on the block known as the Seattle “grunge” scene and Corrosion Of Conformity it would seem were having none of that rubbish and were early purveyors of what would go on to be hailed as the NOLA scene with members including Down, Crowbar and many other formidable heavy music legends.

CoC’s sound has become instantly recognisable thanks to unquestionable classic albums such as Deliverance and Wiseblood and with the release of their first studio album in thirteen years – 2018’s No Cross, No Crown it almost seemed as if the North Carolina natives never really left us. Firstly I asked as to whether Corrosion Of Conformity were done and had called it a day or was it that they were on permanent hiatus due to Pepper’s commitments with Down. Pepper enlightens Heavymag of the lengthy space between the albums 2005’s – In The Arms Of God to No Cross…

“It’s a little bit of a deeper story than that, to be honest. The (CoC) book was never finished. The reason I say that is because when we had done recording In The Arms Of God, in my opinion, that was the best thing I had ever done. That was as good as I could do it. I was stoked to be at the pinnacle of what I thought I could do and what the band did. We were firing on all cylinders. It (In The Arms Of God) was something different and had some depth to it and I was extremely happy.” After the release of that album, things and life began to take a multitude of directions for the band, Pepper continues…“we were touring all over the place and then we were offered a tour opening for Motörhead in Europe for two and a half months and then three days before we were due to leave for Europe I was at my house in New Orleans and a thing called Hurricane Katrina came. So we had to cancel the tour. I had to relocate family members, the entire city was fucked and that changed everything! I had to personally call Lemmy’s management from a payphone booth in the middle of nowhere near Texas and tell ‘em what had happened and that we couldn’t go on the tour. That hurricane was a big game changer and changed my whole life!

It took a while to get everything back together…So I spoke to Lemmy ‘cos he was watching things on the news. Being as smart as he was had an ear to the ground and the first thing he asked me was if I needed any weapons?” Pepper laughs as he recalls this and commenting on Lemmy’s ability to call on various biker connections he had in Texas, then Pepper matter of factly states on reflection of the conversation, “no Lem, I’m pretty alright on that one! I’m just really bummed that we can’t go on this tour!” But Lemmy totally understood. So those events totally put a dampener on the CoC thing and then just after that the record label that we were on folded. So it all just fizzled out, it was not really by choice, it was just the timing and the way the world turns. I quit trying to figure out the rock n’ roll shit out a long time ago, I learnt that you just gotta roll with it.”

As disappointing as Katrina’s effects had had on Corrosion Of Conformity, having to look back, take into account the impact that something like that Hurricane had on their lives. The band had to regroup, move forward and try and figure out what impact it would have on them being an artist and an adult has on all of our lives. Clearly all of these major events had a massive impact on the band, so with those catastrophes and setbacks behind them, our chat fast forwards to Pepper enlightening us as to having the world turns as it did, what was the motivation behind making the phone call to getting the Corrosion of Conformity family back into the same rehearsal space again. “It was just timing, once again. I realised that I wasn’t doing much with Down, things were simmering down a bit…everything just kind of lined up. We discussed it, got back together, played some songs then we decided maybe we should just go to Europe, play some shows and see what happens and just book it. We didn’t have a booking agent, we didn’t have a record label, we didn’t have a manager! We didn’t have anything! So we made some phone calls, booked some shows in Europe nothing big just some little clubs, people showed up in droves and we called it the “Deliverance Revival”. We weren’t trying to be Winger or some shit doing reunion money grabbing thing, we just wanted to see if we could do it, including a new record.

So we did and it was great and we ended up touring without a fuckin’ record label or some shit for two fuckin’ years!” Pepper proudly states matter of factly. We zig-zagged all over the United States doing tours with Clutch and all kinds of people. Then when people heard we’d got back together all of a sudden Nuclear Blast jumped in and offered us a rock-solid deal, no bullshit four-page contract it was pretty fucking simple. We were totally stoked about that kind of offer, we wouldn’t even think about going anywhere else. So we kept our word put our heads down on the chopping block and started working on the brand new record!” Which as we now know would turn out to be No Cross, No Crown.

Whilst Pepper considers that In The Arms Of God to be the pinnacle of Corrosion Of Conformity’s artistic career, one of their early classic and amazing albums Deliverance is nothing but all killer no filler. Pepper agrees wholeheartedly as I ask whether when that album was wrapped did the band listen back to it and think, “Yepp, this album perfect, we have created something amazing and will be revered as a classic for decades to come?” Peppers chimes in and breaks down the creation of Deliverance by commenting…”The really fucked up thing about that is that we had recorded that album for a really small label known as Relativity and in a nutshell, we were recording songs like “Albatross” you know, we had recorded it for pennies and a dollar and it was actually sounding like that. Then the head honcho’s at Columbia records got a hold of the demo’s and tried to buy us off of Relativity records and once they found out that Columbia was trying to do that, Relativity came back and said “HELL NO!” They weren’t going to sell us. So the fucked up thing is that Columbia went and bought 51% of the shares in Relativity and took the fuckin’ label! So the very next day the head of Columbia records calls me and says, “Go and buy the New York Times and go to the financial page and the headline reads “Sony / Columbia music acquires Relativity Distribution”.

Pepper then continues about his seemingly young age going on by saying, “Shit I was just a kid man, riding pushbikes around New York and not having a pot to piss in.” Pepper laughs upon reminiscing and then continues, “so Columbia got all the tracks and put us up in Electric Lady Studios in NYC and told us to “finish this thing how we want!” It was like winning the lottery man. Believe me, when we have given that privilege we spent the fucking money and got to finish Deliverance how we wanted.” And lo thus the heavens aligned and we have the near-masterpiece that is Deliverance.

And so on the years roll and here we are on the cusp of the upcoming CoC Australian this coming February and being a long time fan but never having the opportunity to witness them live I wanted to know what kind of show Corrosion Of Conformity’s fans could expect. “We’re debating that right now actually. Having played shows in towns four or five times and having to go off on tangents and play obscure songs we haven’t played before and taken that path or do we go to Australia for the first time in twenty years and drop the fuckin’ hammer? Or…do we play until we can’t stand up straight by giving it all we can? So discussing it right now, either way whatever we do is gonna be slammin’”.

Pepper ends our discussion by matter of factly stating that “We’re not coming down there fuck around!”