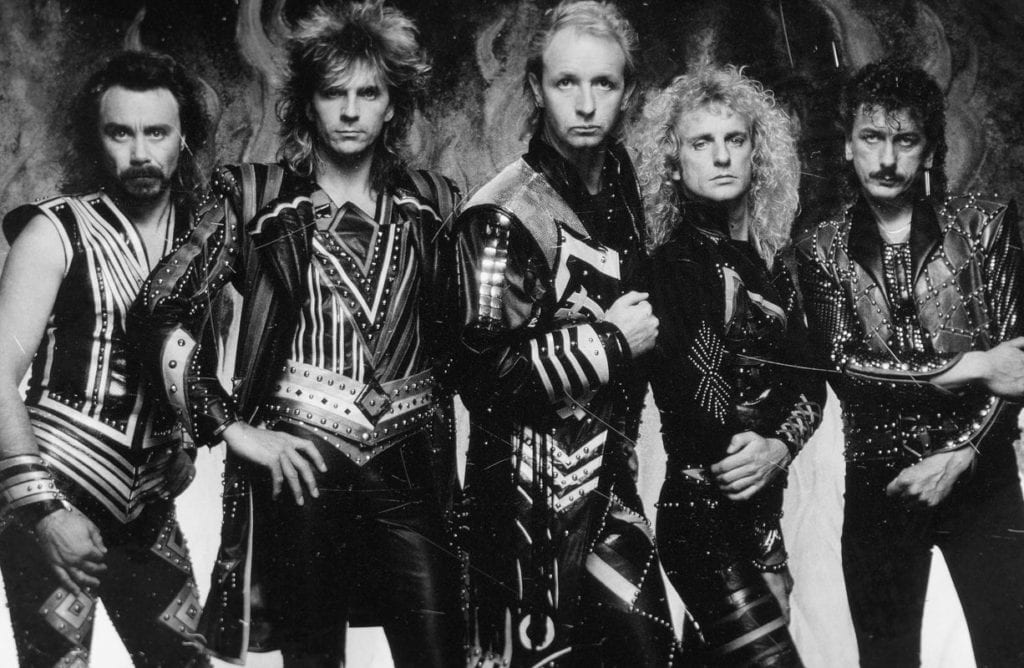 Shedding the light and darkness on this epic tree, this week we focus on the influential Judas Priest and the vocalist’s behind the monster that branched out to greatness across the spectrum of metal. With an amazing back catalogue of seventeen records to choose from, it is clear that Priest is the pioneers of their craft. The band was surely hell bent for leather!

Roots from West Midlands in 1969 led to the forming of a band by vocalist Al Atkins with bassist Bruno Stapenhill, guitarist John Perry, and drummer John Partridge. Stapenhill came up with the name Judas Priest from the Bob Dylan song, “The Ballad of Frankie Lee and Judas Priest”. After the passing of Perry, the guitarist was replaced by Ernie Chataway. After the first gig on November 25th, 1969 at The George Hotel in Walsall, the band toured Scotland and disbanded in 1970.

This was far from the beginning of the end, as the band soon reformed in Birmingham, with the new line-up of guitarist Kenny K. K. Downing, bassist Ian ‘Skull’ Hill and drummer John Ellis. Atkins decided the band take his old band name of Judas Priest and performed the first gig with the reformed line-up at St John’s Hall, Essington in 1971. Judas Priest moved from their blues influences to hard rock, opening for big-name acts such as Budgie, Thin Lizzy, and Trapeze. Drummers came and went, and in 1973, the then-drummer Allan Moore and founder Atkins left the band due to financial difficulties and problems with the managers from Tony Iommi‘s company, IMA. Hill was dating a woman who suggested her brother – a man by the name of Rob Halford – and the rest was history.

The Halford-fronted line-up toured the UK often supporting Budgie, and headlined some shows in Norway and Germany. Another lead guitarist Glenn Tipton joined Downing in 1974 and the debut “Rocka Rolla” (1974) was released. Judas Priest then found themselves in dire straits due to the flop of the album.

It wasn’t until follow-up “Sad Wings of Destiny” (1976) where the band truly found their sound. This album gave us classic tracks such as “Victim of Changes” and “The Ripper”. Songs such as “Tyrant” and “Epitaph” were scrapped from the debut by producer Rodger Bain due to them not being commercial enough. These tracks finally got to see the light of day with this release and the newly founded producers, Jeffery Calvert and Max West. This was also the only album to feature Allan Moore on drums.

“Sin After Sin” (1977) was the bands’ first album on a major label (CBS) and was produced by Deep Purple‘s bassist, Roger Glover. Session drummer Simon Phillips replaced Allan Moore on drums for the record. Les Binks, a friend of Glover’s was the touring drummer as he could replicate Phillips’ sound and had a double-bass. The album featured “Sinner”, “Dissident Aggressor”, and “Starbreaker”. Funnily enough all songs were covered by Devin Townsend, Slayer and Arch Enemy, respectively. Glover encouraged the cover of Joan Baez‘s folk classic, “Diamonds & Rust” to be included on the album. It was the first song to get airplay and Baez herself approved of the cover.

“Killing Machine” (1979) was the last album to feature drummer Binks and was the album where the leather costumes came into the picture, as did the Harley-Davidson motorcycles which Halford rode out on stage: knowing how to make an entrance in style. Due to the murderous tone of the title CBS/Columbia in America disputed the “Killing Machine” title and used “Hell Bent For Leather” to suit them. The album gave us the infamous “Hell Bent for Leather”, “Delivering the Goods”, “Take On the World” and the Fleetwood Mac cover, “The Green Manalishi (With the Two-Pronged Crown)”.

“British Steel” (1980) was recorded at the Tittenhurst grounds of former Beatles drummer, Ringo Starr, and was the first album to feature new drummer, Dave Holland. Digital sampling was not available at the time and the sound of smashing milk bottles can be heard on the title track, as well as billiard cues and trays of cutlery as featured on “Metal Gods”. This was an iconic album for Priest with numerous classics, apart from the two aforementioned, it also featured “Grinder” and the party anthem, “Living After Midnight”.

“Point of Entry” (1981) continued with the line up of Halford, Holland, Downing, Tipton and Hill for another four releases after this. Classics such as “Heading out to the Highway” and “Hot Rockin'” featured on the record.

The follow-up “Screaming for Vengeance” (1982) gave us the infamous “The Hellion/Electric Eye” and “You’ve Got Another Thing Coming”. “Defenders of the Faith” (1984) saw hit after hit with “Freewheel Burning”, “The Sentinel”, “Love Bites” and “Some Heads Are Gonna Roll”.

“Turbo” (1986) and “Ram It Down” (1988) were to be the last two albums to feature Holland, with a drum machine replacing him on the final recordings of “Ram it Down” due to health problems the drummer was experiencing at the time. The album even featured an off-field cover of Chuck Berry‘s “Johnny B. Goode”.

“Painkiller” (1990) was an iconic release, proving to be a favourite with metal heads. The title track was given a worthy rendition by Death on “The Sound of Perseverance” (1998) album. Other fan favourites such as “A Touch of Evil” were also featured. This was Halford’s last record with Judas Priest for some time and was the first to feature newcomer Scott Travis on drums.

Halford went on to concentrate on Fight from 1992 to 1995, collaborating with Russ Parrish on guitar, former Cyanide guitarist/keyboardist Brian Tilse and bassist, Jack “Jay Jay” Brown. Travis joined Halford, however, and continued to play with Judas Priest. “War of the Worlds” (1993) and “A Small Deadly Space” (1995) were released on Epic Records.

After Fight disbanded, Halford fronted the industrial metal group 2wo. Halford collaborated with John Lowery (now known as John 5), the guitarist who played in Marilyn Manson‘s band before joining Rob Zombie. “Voyeurs” (1998) was released on Trent Reznor’s (Nine Inch Nails) label Nothing Records. Halford had a stellar team on board with Reznor credited as executive producer and producers Bob Marlette and Skinny Puppy‘s Dave Ogilvie.

After the demise of 2wo, Halford focused on his solo career with his band the aptly titled Halford. “Resurrection” (2000) and the follow-up “Crucible” (2002) featured the line-up of bassist Ray Riendeau, drummer Bobby Jarzombek, and guitarists Mike Chlasciak and Patrick Lachman; the latter of whom later became the vocalist for Damageplan. “Halford III: Winter Songs” (2009) featured Mike Davis taking over bass duties and guitarist Rob Z of Bruce Dickenson‘s band joining Chasciak. The follow-up “Halford IV: Made of Metal” (2010) featured the same line-up.

While Halford was busy with his two side projects and solo career the singer of Judas Priest tribute band, British Steel, was hired in 1996. Tim “Ripper” Owens provided vocals on “Jugulator” (1997) and “Demolition” (2001), as well as two live double-albums: 1998’s “Live Meltdown” and “Live in London” (2003). Check out “Cathedral Spires” taken off “Jugulator” below for some epic Owens.

Owens left in 2003 to front power metal band, Iced Earth. Owens also fronted Yngwie Malmsteen’s Rising Force and currently is a member of supergroup Charred Walls of the Damned, joined by former Iced Earth drummer Richard Christy (who once played for Death) and bassist Steve DiGiorgio, who has recorded with Obituary, Testament, Death, Iced Earth, along with guitarist Jason Suecof.

2003 saw the reunion of Halford and Judas Priest when the singer co-headlined the 2004 Ozzfest. “Angel of Retribution” (2005) was produced by Roy Z . The follow-up “Nostradamus” (2008) was produced by Tipton and Downing. The concept album was Downing’s final appearance following his announced retirement in 2011. “Redeemer of Souls” (2014) saw English guitarist, Richard Ian Faulkner, join Tipton for the double-guitar attack.

Faulkner stated that the band had begun recording of their new album in January this year, which will be followed by a tour sometime next year. The metal gods remain strong and heady today, pumping music through our speakers for a long time with roots that run deep.

PrevPrevious.[NEWS] VOYAGER Has A New Video Clip
Next.[LIVE REVIEW + PHOTOS] GROOVIN THE MOO at Bendigo Showgrounds, 6th May 2017Next