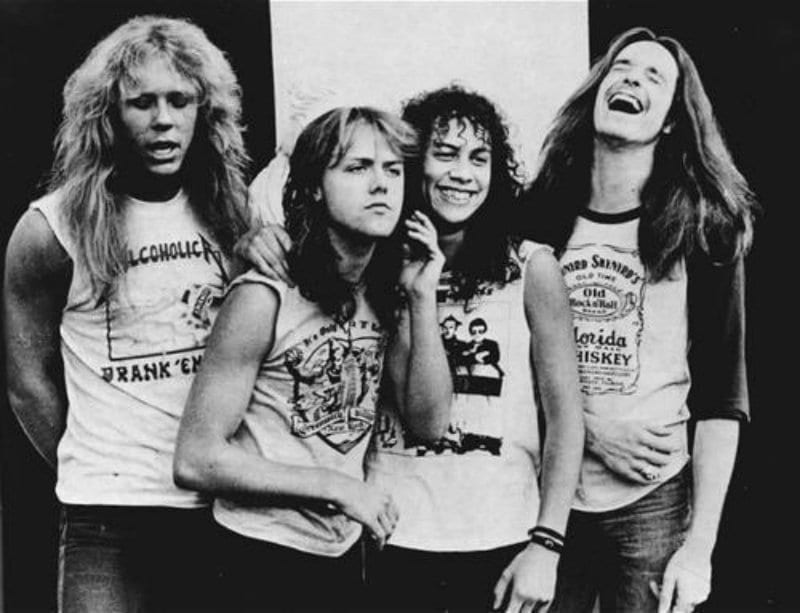 One tree that has been growing since 1981, losing and gaining fans all over the globe; much like their history with fallen heroes, fallout’s between members and the line-up changes; but always keeping with the times, proving to be one strong tree are the mighty Metallica, which today’s edition of HEAVY ROOTS will focus on.

It all started in 1981 when a drummer from Denmark by the name of Lars Ulrich got a reply from an advert he had put in L.A. based newspaper The Recycler, basically asking for a band to jam Diamond Head and Iron Maiden songs with. A guitarist named James Hetfield, who played for a band going by the moniker of Leather Charm responded. Ulrich, having a contact with Metal Blade Records, founder Brian Slagel gained an opportunity to have a track featured on the Metal Massacre compilation. After Ulrich decided the name of his new band to be Metallica he put in another advert in The Recycler asking for a lead guitarist. A chap by the name of Dave Mustaine responded and soon became a fellow member of the band. Hit the Lights, originally written for Hetfield‘s short-lived band Leather Charm was used as Metallica‘s first recording for that infamous Metal Massacre compilation.

In 1982 Metallica had their first live show opening for British heavy hitters Saxon and later recorded their first demo Power Metal. After witnessing the bass playing of one Cliff Burton at The Whisky a Go Go for Californian outfit Trauma, he was chosen to play for Metallica. Due to Mustaine‘s supposedly violent behaviour, alcohol and drug abuse the man got the boot from the band and was replaced by Exodus guitarist Kirk Hammett just before the release of the originally titled Metal Up Your Ass, which was renamed Kill ’em all. Mustaine argued that Hetfield had stole his leads, particularly off his own song Mechanix, reworking it as their own, one of my all time favourite Metallica songs, The Four Horsemen.

And secondly the band Dave Mustaine went on to form who are still creating amazing music today, some refer to them as Metallica‘s rival band, Megadeth:

The follow up to the 1983 debut Kill ’em all was released a year later, that being Ride the Lightning. Coming out at the end of July I would have only been half a month old so it would be some time yet before I got my first taste of Metallica. I do remember however in my early teens in the backyard pool cranking the two albums to follow. This album would give us classics such as Fight Fire with Fire, Fade to Black and my personal favourite off the album For Whom The Bell Tolls.

Metallica‘s third release, Master of Puppets was their first to be certified gold in 1986. The band joined Ozzy Osbourne on tour however later that year during the Damage Inc Tour travesty struck the band. Sadly 30 years ago bassist Cliff Burton was taken from us due to a horrific accident involving the tour bus. Burton‘s legacy remains as he was one of the greats and fallen heroes of metal. Bassist Jason Newsted, who played for Phoenix based outfit Flotsam and Jetsam at the time was to become the new bassist for Metallica.

The first Metallica album I remember hearing was Newsted‘s first, that being the 1988 release …And Justice For All. With blistering opener Blackened, title track, ‘…And Justice For All and Harvester or Sorrow, the album was full of gems. One song that really did if for the band was just that,the infamous One, with its memorable video that would get heavy rotation on MTV’s Head Banger’s Ball when there were such things as good music shows.

As far as things went the sound of Metallica changed with the times on the 1991 release known as the Black Album. Songs such as the overplayed and over done at Karaoke bars in Bali by yours truly, Enter Sandman, the Unforgiven and Nothing Else Matters, bringing Metallica well into the mainstream wreaking havoc in the charts. Many die hard fans saw Metallica who they once knew as Alcohollica now as Sell-outs. It could be argued was the Black album really a sell-out or a master-piece. What ever you may think the band kept with the times and they are still rocking out today. Newsted stayed with the band for two albums to follow, that being Load and Re-Load of 1996 and 1997, respectively. The band continued to play more so Hard Rock then their earlier thrashier style, gaining a younger crowd. Metallica gained and lost fans which is something a band of that stature wouldn’t be phased by. Newsted quit the band in 2001 to form his own project Echobrain. These roots spread further and in 2002 Newsted joined Canadian thrashers Voviod. The man has kept busy, not only being a guest for bands like the reformed Sepultura with their underrated 1998 album Against and also joining super-group Rock Star Supernova with the likes of Motley Crue‘s Tommy Lee and  Gilby Clarke, one time guitarist for Guns ‘n Roses. Newsted also released his own Heavy Metal Music record in 2013 with his own band the aptly titled Newsted.

Bass extraordinaire Robert Trujillo was to replace Newsted and a swap was made as Trujillo took over bass duties for Metallica, Newsted filled in playing bass for Ozzy Osbourne‘s band. Trujillo was most famous for playing with Thrash/ hardcore punk crossover legends Suicidal Tendencies, however it was the side project Infectious Grooves where I truly believe the man’s talent shines.

The album to be released after Reload was a compilation titled Garage Inc which was released as a double album in 1998. It included all covers of bands that Metallica had been influenced by with the likes of the Misfits, Diamond Head, Discharge, Mercyful Fate, Bob Seger and Lynard Skynard to name a few. It was the rendition of the Thin Lizzy version of Whiskey In a Jar which was made memorable by its film clip.

In 2003 Metallica released the most Alternative sounding record of their career apart from their LuLu collaboration in 2011 with the great Lou Reed, that being St. Anger. Producer Bob Rock played bass on the record known for Ulrich‘s tinny drum sound. 2008 saw the release of Death Magnetic what many saw as a slight return to form with guitar solos back in the mix and a thrash approach on the record. The long awaited Hardwired… to Self Destruct album which you can pre-order now, (links below), looks promising after their last woeful track, that being the title track, with its childish lyrics…. It looks like there is hope after hearing their more recent track Moth into Flame.

No body can argue that the tree of Metallica has come from some real HEAVY ROOTS and continues to branch out world wide. And if you were wondering, as the band are part of the big 4 alongside Anthrax, Slayer and of coarse the once rival Megadeth things are now good between Metallica and Mustaine. Spread the Heavy Metal love. Here’s to ‘Tallica ‘2016 \m/