CARBON BLACK ‘End of This’ 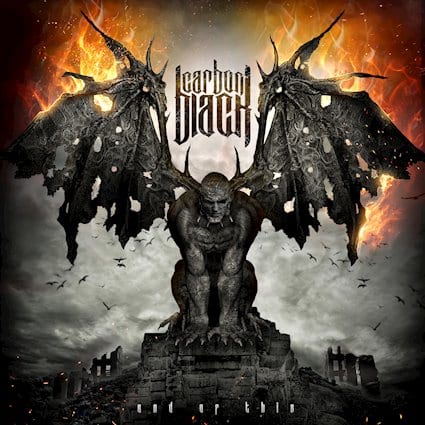 After hitting metal fans right between the eyes with their debut E.P. Principium back in 2014 Carbon Black have since been carefully crafting their long awaited full length entitled End of This.

Produced by ARIA Award Winning Producer/ Engineer Lachlan Mitchell who has worked with the likes of The Jezabels, The Vines, The Hard-Ons, Nitocris and Henry’s Anger (just to name a few) and Mastered by the almighty Alan Douches at West West Side Music in New York City, U.S.A.

Opener “Timent Puer Natus” kicks in with a swirling vocal and percussive piece slowly increasing in volume to have the punter clenching their fists in waiting for track two, the first single and title track off of this album End of This. It doesn’t get much more classic metal than this track, complete with a beating intro drum section from Steve Giles (Drums) and ‘Dimebagesk’ pitch squeals from Damon Bishop (Guitar) during the verse sections. The Chorus sections seeing Rob Giles (Bass) control the rhythm whilst Jon Hurley (Vocals) offers a heavy vocal that is placed well with the music.

Track three “Ignorance” keeps the intensity at 11 with impressive chug sections throughout. With a strong gang vocal I can picture fists up high for this track live. Bishop’s lead pieces are mighty and bring the power of the wah wah pedal up to the front.

“Cowards” sees a welcome tempo change within the verses only to rhythmically and vocally crush in every other moment of the track! The vocal gymnastics really add depth to “Cowards” and the classic fade out is always a nice touch especially when leading into the string driven track “Deceive” which adds some light and shade to the midway point of End of This. The track also adds to the opening of “Deny” with a low and dark bass driven section from Rob Giles. “Deny” gradually builds and strips back and is definitely one of the more epic tracks on the album with a lyrics “one time, one chance to rise up and take it all back, deceive, deny…..” this track is sure to grab the listeners attention!

Closer “Blood and Sacrifice” rounds out End of This with what is now expected from Carbon Black, a solid metal track featuring continuations of wailing clean vocals as heard of prior tracks ‘Plastic Art’ and “My Own”. It’s only fair to say that Jon Hurley melds his vocals well and the backing vocals do add a slash of evil throughout the entire album.

In closing, the influences musically and vocally on End of This are pretty obvious and clear, it swings in and out of some classic heavy metal styles some obvious and some not so much. Overall End of This is a solid album and any heavy music fan will struggle NOT to bang their head to it be it in the car, on the stereo at home or (in my opinion) the best way to hear any heavy music! LIVE! \m/