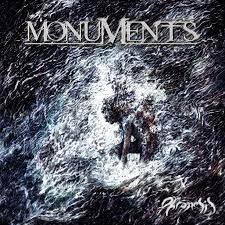 It’s hard to believe that the 5 British Djenty bois in Monuments would be able to top their critically acclaimed second album The Amanuensis. But here we are. This is their chance. Having high hopes for the release of the 3rd full length album Phronesis, I hit play and let their latest auricular offering wash over me.

Crossing borders and pushing the limits on what was once thought to be previously impractical and impossible, Phronesis is a paragon of how exceptional musical talent transcends distance and time. With the first songs being written in 2015, through to final recording during Spring/Summer 2018, each track has had time to be meticulously crafted and moulded by the virtuoso hands of guitarists John Browne and Olly Steele. Endless miles and oceans separated the studios where each piece of the album was recorded, from UK to USA, Derbyshire to New Jersey, and finally Wisconsin. The distance didn’t seem to have affected the chemistry; each track explodes and engages you as if they’re all there in the room together. The production on Phronesis by Joel Wanasek is an absolutely incredible example of how to capture the dynamic diversity and mastery of a band like Monuments.

The guitars all over this track are clearer than a nun’s rap sheet: riffs are sharp and punchy while not being too sterile, giving the clarity that perhaps I missed from The Amanuensis. Adam Swan’s killer bass lines do unfortunately become lost across the majority of the album, although satisfyingly a few key tracks bring in some bassy goodness, proving Swan’s chops are almost as impressive as his dreadlocks. Lyrically, The Phronesis doesn’t quite captivate me as much as their predecessor album. Vocalist Chris Barretto brings catchy and memorable hooks, and his unmistakable screams sit at the forefront of most of the album. However, Barretto’s lyrical nuance doesn’t quite feel as enlightened as The Amanuensis. But there is feeling in his words. Phronesis delivers inescapable and relatable emotion ‘What the hell do you want from me, honestly, leave me the f*ck alone’ – £5 to anyone who can’t relate.

The songs are immaculately crafted, with smooth transitions between riffs enhancing the dynamics that are sometimes lacking in this musical genre. The album opens with “A.W.O.L”, one of the early release tracks on YouTube <https://youtu.be/W4sEXcolEy0> and is a naturally epic and escalating song. “A.W.O.L”opens with ambient strings and ominous horns, then blisters into groovy, brutal and assertive riffs. In true Monuments style, the guitars seem to play off each other, layering rhythms that boggle the brain, interlaced with melody and danger. The subsequent tracks, “Hollow King”, “Vanta”and “Mirror Image” bring with them thunderous riffs in their unmistakable, signature style, delivering everything you can expect from the band’s maturing songwriting. The tempo change at 3:08 in “Vanta” is a trademark example of session drummer Anup Sastry’s mastery. While Sastry is not the band’s official drummer, he recorded the percussion parts for the album and his signature is unmistakable.

Track 5 “Ivory” brings back the heaviness, the song structure keeps you guessing, leading you through a barrage of fervent riffs before leaving you with Swan’s signature slaptacular bass lines, this here is the magic. “Ivory” comes to a close with some uncharacteristic vocal riffing, which is a little off putting to be honest, but otherwise a cracking tune.

At the apex of the album sits three absolutely intoxicating songs, “Stygian Blue”, “Leviathan” and “Jukai”. Guitarist Browne considers “Stygian Blue” part of a personal journey, coming from “the darkest place I’ve ever been in my 32 years”. The songs translate the energy from this confusion and frustration into three of, perhaps the best, Monuments songs on the album. Relatable lyrics seamlessly whet the appetite for these mid-tempo moshpit motivators. “Jukai” opens by blasting out of nowhere, classic overdrive guitar tones and a refreshingly dirty riff threading its way through the song. It’s grounded, but heavier than a lead brick. “Leviathan”, I can’t help but dance uncontrollably to this chorus, mesmerised by the symphonic, percussion-soaked progression. This is arguably the best track on the album.

Phronesis is completed by “The Watch”, a song feeling intentionally composed for its position at the close of the album. Reinforcing the instrumental mastery and diversity of the band, it feels like easing off the accelerator, bringing the listener back to Earth from the orbit that the rest of the tracks blasted you into. As the closing riff fades, there is a sense of completion and wholeness to the album, evidence of finely-polished musicians who know how to structure a musical experience.

Phronesis is a delightfully brutal, symphonic, dynamic journey in expertly presented in a textured, polished and highly-listenable album.

Monuments are currently touring Europe, with dates starting on the 4th of October – check their Facebook for info for your city facebook.com/thisismonuments