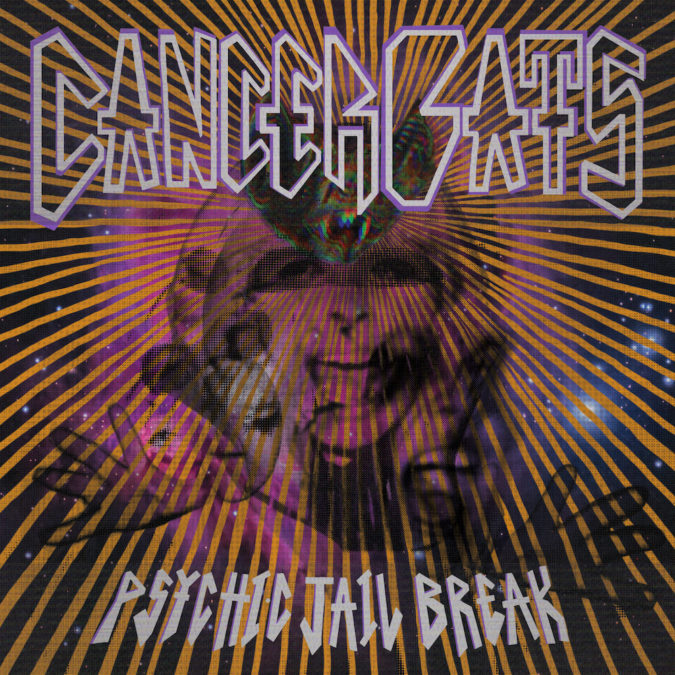 Cancer Bats are about to release their seventh studio album, has it really been that long!

Hail Destroyer was a game changer back in 2008, and it was the first time many people in Australia had heard of this Canadian hardcore band. The riffs were huge, and the tones were even huger.

Psychic Jailbreak is eleven tracks of what you would expect from these guys, accessible and fun riffage that gets your foot tapping and your head nodding, and I’ve got a sneaking suspicion they might gain some new fans on the way.

Track One, Radiate, kicks off the album like a warm punch in the face. A bouncy drop D riff hooks itself in straight away, and there is a perfect blend of nostalgia and new, nothing over-complicated going on here, but more than enough to get the head nodding in approval. The opening track grabs you straight away and doesn’t let go for the whole three minutes. Halftime tastiness under the guitar solo and big unison bends, then back into the main riff and repeated vocal hook, guaranteed to have you screaming along. Great opening track to the album, hopefully a sign of more to come.

The Hoof is up next and it opens up with the sound of skateboard wheels on concrete, before giving way to some tough hardcore riffage. If the first song was meant to be simple and hook you in, The Hoof has a bit more depth in terms of musicality, the huge half time chorus complimented by some great production values and doubled vocals. The bridge section takes the song into unexpected territory, albeit with skateboard wheel samples, complimenting the repeated outro vocal ‘My life was saved by a skateboard’, very relatable.

Track four, Friday Night, veers off musically into unexpected territory, with a great build into the chorus, before exploding into a gorgeous double time solo section.

Hammering is up next, and it’s a nice contrast to the prior tracks intensity. This track is half time and down tempo, complete with female backing vocals, and the word epic is the first thing that comes to mind.

Track six Crocodiles ups the tempo slightly, but its new territory in terms of sound. Big open string drones in the verses, reminiscent of Modern Life is War, giving way to huge four on the floor riffage.

Shadow of Mercury is up next and there are some definite Comeback Kid hardcore vibes going on here. Huge reverb tails on the chorus vocals and hardcore guitar riffage aplenty. This track sounds tough, like it wants to fight you.

Track eight Keep on Breathin brings back the swagger and swing without being predictable. Little interludes in the rhythm reminding you that this is not a Clutch album, it sounds more like Meshuggah trying to play Southern Rock.

Pressure Mind doesn’t beat around the bush, straight into the chorus hook with repeated gang vocals and lyric hook. The verse drop away to give room for the lyrical narrative, but this ain’t no country song.

Track ten, Rollin Threes, kicks off with some tasty tom riffs in the opening verse before exploding into the chorus with cymbal crashes in patterns of three, maybe that has something to do with the title? The album finishes off with the title track Psychic Jaibreak, and what a cracker of a track to close out the album. The riffs swing in the best kind of way, before giving away to halftime chorus goodness.

Psychic Jailbreak is a cracker of an album. Overall, there is more than enough musical variation to keep you listening and wanting more. If you’re already a Cancer Bats fan then album number seven is not going to disappoint, the riffs are huge, the vocals hooky and the production is outstanding. If you’re not a fan of the Cancer Bats after a couple of listens you will be.

If you like your metal a little less serious, and you want to have a head nodding good time, then this album is definitely worth checking out. Bring on the album tour already, I’m there.