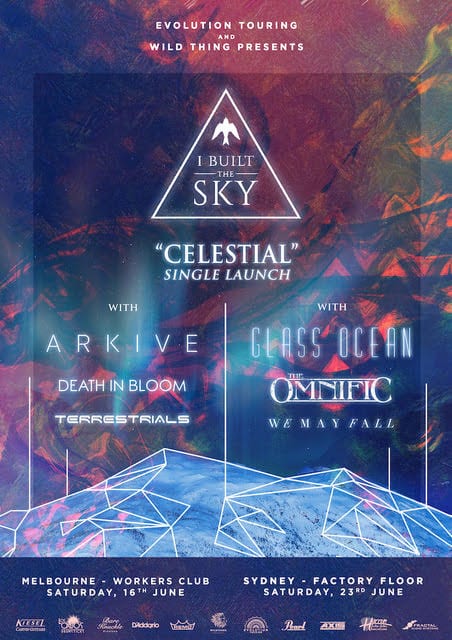 Melbourne progressive instrumental project, I Built The Sky have released their brand new single, Celestial ahead of the singles launch shows which kick off this weekend in Melbourne.

Listen to this epic piece of music here listen.ibuiltthesky.com/celestial!

I Built The Sky is the project of guitar wizard Ro-Han who has been steadily climbing the ranks of the progressive instrumental scene worldwide with the release of the album The Sky Is Not The Limit in late 2016.

A steady flow of impressive music video’s continuing into 2018 have strongly supported the release. The most recent music video for Cumulus featured Ro alongside full band line up of Sam Tan on bass and Rob Brens on drums.

With the launch of a brand new single titled Celestial, I Built The Sky will perform 2 exclusive shows only. Melbourne and Sydney; both with stellar line ups to fulfil all your progressive metal needs.

With a name like Celestial, this might indicate a move beyond the cloud name song titles and into elements from the wider universe, but we’re only guessing….

I Built The Sky is known for intricate guitar work, hooky melodies and an eclectic mix of tunes from heavy as hell in your face riffage, to stunning acoustic tunes and ambient pieces to drift off to, all intertwined with fantastic musicianship and some tidy production.

To start the year off I Built The Sky released a song and video for an acoustic track called ‘Striations’ which featured the very talented Tim McMillan and Rachel Snow and has surpassed 525,000 views 100,000 of which were reached in less than 2 days.

A solo project turned touring band, I Built The Sky managed to clock up some milage touring Australia with Caligula’s Horse in the later part of 2017 with a headlining tour earlier in the year.

If you haven’t yet heard or seen I Built The Sky, YOU NEED TO, NOW!

w/ Glass Ocean, The Omnific & We May Fall

Both shows offer a songwriting masterclass event before the show. Details are in the ticket links!

I Built The Sky will be heading to Europe in October, joining Caligula’s Horse on their epic All Aussie Invasion which also features Circles!