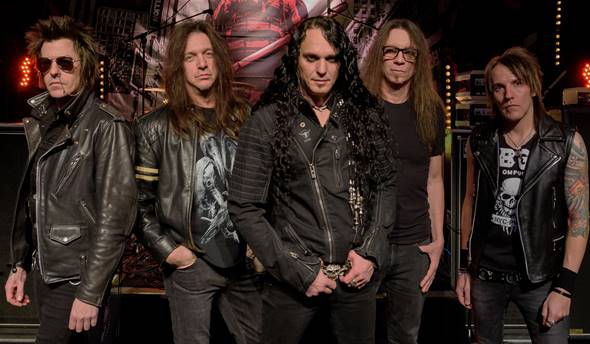 “To be completely honest, and full disclosure, every time you play with another band – whether you’re opening for them or headlining – you wanna kick their ass,” admitted Skid Row bass player and founding member Rachel Bolan of the band’s attitude to performing live. “Even if they’re your best friends, you just wanna go out there and kick their ass and that’s our attitude every time we go out. Whether they’re friends or not (laughs) we’ve got a job to do and that is to kick their ass.”

It is an attitude that has served Skid Row well throughout their nearly thirty-year career, and one which they will continue to exploit on their upcoming United World Rebellion tour kicking off in Brisbane on October 18.

“We’ve always been a band whose mantra was ‘believe in yourself’ and do what you wanna do, but most importantly believe in yourself,” Bolan measured, “Otherwise no-one else will. We just took that a little further with how when you’re a musician or when you’re weird – but that’s usually all musicians anyway (laughs) – but when you’re weird or different people try to overlook you or put you in a box and that’s something we’ve never dealt with well. It’s like, ‘nah’, screw that, we’re doing it our way and we’re gonna succeed at it. That’s the theme behind United World Rebellion.”

In a candid interview, Rachel discusses the tour and upcoming final album in the United World Rebellion trilogy, what new vocalist ZP Theart brings to the band and how he came to join, as well as a few tales from the early days of Skid Row and the future of the band.

Also, watch this recent interview with Skid Row‘s Rachel Bolan by Mike Brierly in the UK a few weeks ago:

PrevPrevious.SCANDANAVIAN FILM FESTIVAL To Hit Australia
Next.I BUILT THE SKY Celestial Shows Kick Off This Week in Sydney and MelbourneNext