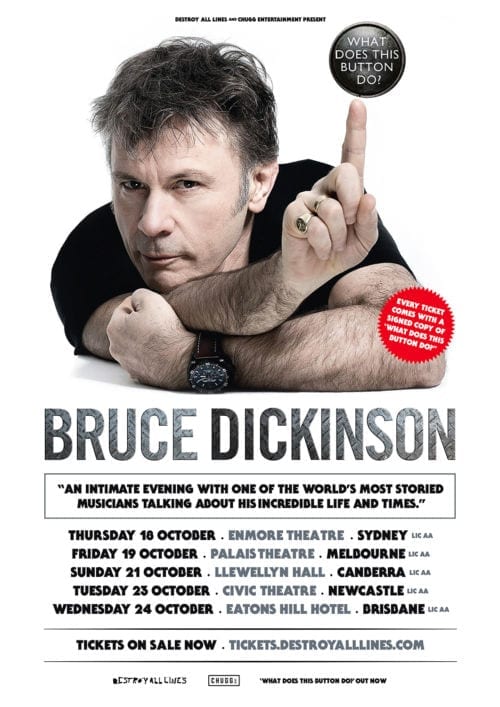 1:22am – Metal V has just returned home and has a deadline to meet pertaining to a review that must be submitted of a solo spoken word show delivered by THE ONE VOICE that made me the metal loving man I am today. That voice belongs to none other than the one and only, never to be knighted, Sir Bruce Dickinson!

It would be a fair assumption to make, finding it hard not to notice amongst through the plethora of IRON MAIDEN t-shirt adorning Melbourne crowd of both young and old, male and female, singles and families alike, that most of us present at this very special and intimate evening with Bruce that, like me, that man, his instantly recognisable vocals and the band he has fronted for nearly four decades not excluding his own stunning solo career is the reason 95% of the crowd love metal and why we were there.

Now, I must digress for a mere moment and give a massive shout out and thank you to Sam and his lovely family and, the reason is this! Being given a media pass to review last night’s show, I was unfortunately excluded from receiving a complimentary copy of Bruce’s autobiography ‘What Does This Button Do?’ of which all paying punters received. Having received my ticket from the box office and making my way to allocated seat F13 I sat down and waited for the event to commence. Moments later a family of four, the aforementioned Sam, his wife and two children had paid seats F13 – F16. Perhaps there was a double booking mistake, we showed one another our tickets and went looking for an Usher to sort out the seat confusion moments before the event started. Usher found and debacle alleviated, I had unwittingly stolen Sam’s seat. I was told I wasn’t to sit in the stalls but further towards the front of the stage to which Sam stated I got the better end of the deal, but I disagreed, explaining I was reviewing the show and wasn’t entitled to a copy of the signed autobiography to which the generous and selfless Sam gave me his own copy due to each member of his family getting one of their own and not needing four copies of Bruce’s book. I just want to say to both Sam and his family thank you so much for making my night and may his heart of gold and giving be returned to them all in kind. I am so grateful!

Now onto Sir Bruce and his anecdotes aplenty. The man walked on stage in brown boots, blue jeans, white Dalek tee and black shirt looking so far removed from the heavy metal royalty becoming of him, unlike the sea of black tees before him. Here stood before this near sold out crowd was a man responsible for giving so much and making such an impact on people’s lives and our affinity with metal as whole, regardless of genre preference, recalling tales of his, not so much rise to fame or heavy metal heraldry, but of Bruce Dickinson’s life as a young man being caned in a British public school, taking revenge and ordering two tons of horse to be delivered to his house master and subsequently pissing into a serving of celebratory dinner party beans and then being expelled thanks primarily to ‘…his tongue which shall be his undoing!’ Ironically which is the sole reason he was standing before us this evening.

What struck me most about tonight, aside from my nine year old self going out of his fucking mind being in a room with only Bruce, so close to the man that changed my life thirty seven years ago, is that for a man who has accomplished so much and touched so many that there is so little ego (well there has to be considering the stories and photographic proof of tell all tight spandex and Spinal Tap-esque Derek Smalls evidence of junk). To validate this were a few seemingly hilarious tales of buying and wearing ridiculous 80’s heavy metal standard attire, having it made to specific album concepts specifications and getting a little spandex envy of one Steve Harris and wanting to go one up and ultimately finding his Ying Yang themed stage pants being see through.

Tales of being the University social secretary and spending money on events, making money from said events and ultimately leading to being able to book artists and bands therefore leading to meeting a few of his idols early on such as Ian Gillan from Deep Purple. How he came to audition for and join his first notable band Samson and their subsequent two and half year meteoric rise and then rapid fall all consisting of what can and should go wrong in a band did, to ultimately leading to the introduction of Iron Maiden manager Rod Smallwood and being asked to audition and the rest, as they say, is history!

Of course as we are all too well aware Dickinson wears many hats. An accomplished fencer, writer, a commercial airline Captain which was the main topic of this evenings Q & A questions. Some based on his favorites planes, some asking his favorite plane to fly, what has been the most obscure freight item/s he’s had to courier? Whether he has ever had to call for an emergency landing or logically whether he has played any Iron Maiden to his passengers? The answer to that was that he was flying a passenger-less plane with only crew members, his first mate pulling out a boombox and playing Airbourne to which Bruce thought to himself was totally inappropriate and let it slide then subsequently asking if both his first mate and the crew would like to hear the new Iron Maiden album? “Go on then!” was the response to which the new Maiden album was not only played via the cockpit microphone to the crew but also broadcast to the air traffic control team in Brazil. Pure gold!

Tonights over two hour experience narrated by Bruce Dickinson contained more dialogue than can be transcribed merely by me alone but is all narrated in his book. Concluding the evening was obviously about Dickinson not only contracting throat cancer but vehemently conquering it, just as he has done publically in Maiden and counting his treatments away thanks to his commercial pilot training.

Of course I am in no way able to fully articulate the true sense of the tales delivered to us last night by Sir Bruce, whether they be accomplishments or tragedies or comedic anecdotes of spandex and male genitalia.

The two moments that stuck with me personally were, firstly the picture taken from the drum riser at a festival, which Bruce couldn’t remember but an audience member immediately recognised as being from Rio and Dickinson then recalled that at that massive show, the sound was shit, Bruce smashing his head open with a guitar and bleeding profusely exacerbated by hair and sweat and the sound being so terrible that, after screaming at the sound guy to try and rectify the sound who couldn’t speak a word of or understand English, Bruce’s reaction was to throw the fold back speakers off the stage further impacting any decent sound that may of been acheivable and thereby making the on stage sound beyond comprehensible for himself and the band. The second tale I loved was where Bruce spoke of both of his and Ian Anderson from Jethro Tull performance at Canterbury Cathedral and the reverberation of his unmistakable voice and own personal reaction to hearing his voice and vocals reverberate and delay throughout the cathedral creating an unforgettable echo and resonance the Bruce himself recalled was “just incredible!”

And in summation, isn’t that truly the man that Bruce Dickinson is to those of you reading this right now? An unforgettable, unmistakable and resonating voice giving clarity to all we are as not only heavy metal fans, but to be able to achieve and overcome all obstacles and still be fucking articulate and awesome on the other side?