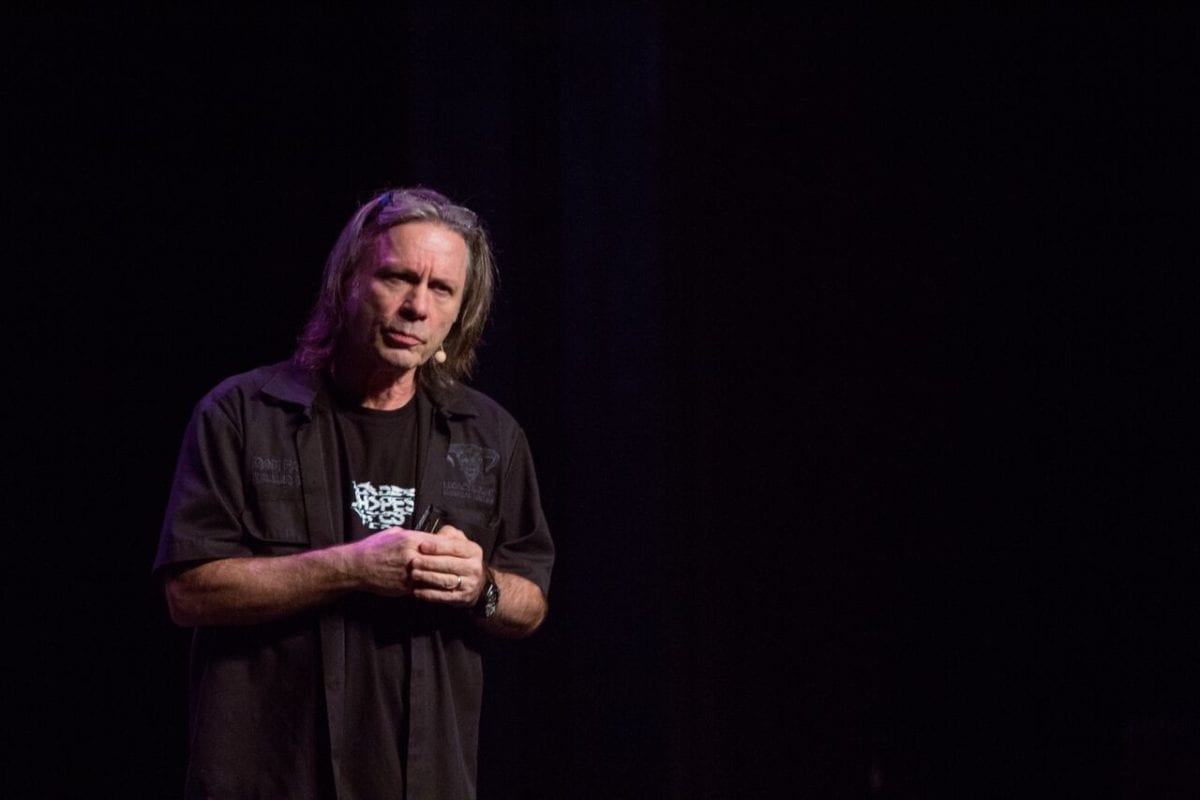 I must confess, before tonight, I’d never been to a spoken word show. To be completely honest, they’ve never really appealed to me. But, when the person doing the speaking is legendary Iron Maiden frontman Bruce Dickinson, my spoken-word-ometer jumped from “indifference” to “mad-keen”!

Bruce is in town to promote his soon to be released autobiography, aptly titled “What Does This Button Do?”, and what better place to hear a Heavy Metal icon speak than the grand old Enmore Theatre, the scene of many of my great musical memories over the years. As I approach the venue, a long line has formed before the doors have even opened. I think the fans are keen for this.

There are plenty of old-school metal heads in the crowd and even a few families. There’s a good vibe, and of course, Mr Dickinson’s distinct vocals playing over the PA. The house lights dim, and after a brief video montage, the man of the moment steps onto the stage to a welcoming roar. He breaks the ice with a few jokes about convicts and ball-tampering and then proceeds to entertain us all with stories from the remarkable journey that has been his life.

He recounted his early years, living in a mining town with his grandparents. A town so rough that the primary school was eventually closed down because the teachers were being assaulted by five-year-olds. He also told us of a trip to Malta during his teenage years to visit an uncle who worked at a military base is where his love affair with aeroplanes began.

From there, we learned how he ended up at a high school for “rich twats” (he only got in because his aunt was the cook). Whilst there, he was bullied and beaten by both fellow students and teachers. He used what he learned in chemistry to become a master of making homemade explosives, resulting in him blowing up the Colonel’s basset hound – accidentally of course. He rebelled until he was expelled, his final report containing the words “his tongue has always been his undoing”. A metal legend in the making.

After high school, it was off to University, where, as a naïve nineteen-year-old, he discovered marijuana. He also discovered his love for music and joined a band called Samson. Unfortunately, Samson never hit any great heights, and according to Bruce, they made every mistake a band could make. They did manage to record, and Bruce’s re-count of their ill-fated tour to the faraway land of….Scotland….could easily have been an excerpt from Spinal Tap! They were eventually sued by their label, and ended up with a fairly large debt, which actually made Bruce feel “worth something”.

Bruce then told of how he was asked by Rod Smallwood to audition for a band he managed. That Band, of course, was Iron Maiden, and the rest, as they say, is history.

Bruce then took us through a visual history of the band, and their many fashion faux-pas (particularly their pants), continually taking the piss out both himself and his bandmates. He also recalled a hilarious story about meeting the British Royal family, and his impressions of both Prince Phillip and Prince Charles had us all in stitches.

He also gave us a couple of life lessons. Firstly, if you’re into wearing chains and dog collars, up-market pet stores are where you get the best stuff (the cheap shit rusts and corrodes, apparently). The other was “If it flies, floats or fucks…rent it”. I think we can all take something out of that!

Bruce also touched on his time away from Iron Maiden. Becoming a qualified pilot, brewing beer, fencing, and the creation of the iconic character, Eddie. As Bruce recounted his stories, it became increasingly apparent that he is a great orator. Armed only with a slideshow, he had everyone in the venue in the palm of his hand. There were moments of laughter, moments of raucous applause, and moments where you could have heard a pin drop, as we hung on his every word. You could hear the emotion in his voice as he spoke about the Scream for Sarajevo documentary. I choked up a little as he recalled that experience.

After a brief intermission, it was time for some Q&A. Before the show, we were given the opportunity to write questions on a slip of paper. Obviously, he wasn’t able to answer them all, but he went through a select few. Some of the questions were themselves, hilarious, and from all of it, we learned that Bruce likes French cheese, never drink water from the tap in an aeroplane bathroom, and that his favourite Australian singers are Bon Scott and Jimmy Barnes. He also told two comical stories about meeting a couple of his heroes, Johnny Cash and Ian Gillan, as well as a fight he had with Steve Harris about who stands where onstage.

Bruce ended the night by reading an exert from the book about the end of his cancer treatment. It was a light-hearted story about how oral morphine was a terrific disappointment, and how it also makes you insanely constipated. His Monty Python-like tale of his experience with the powerful laxative Movicol really is an “always look on the bright side of life” moment.

Not only is Bruce Dickinson a heavy metal icon, but he’s also a qualified airline pilot, novelist, screenwriter, beer brewer, radio presenter, motivational speaker, and international fencer! On top of all that, he’s also a master storyteller. Highly articulate, animated, witty, and at times downright hilarious. Even though tonight he was preaching to the choir so to speak, I get the feeling he could easily invoke an equally rowdy response from a room full of non-believers. And, if you think that after hearing Bruce speak tonight there’s no need for me to read the book, you couldn’t be more wrong. After hearing excerpts from the book, and tales about Bruce’s remarkable list of achievements, it has only left me craving more. After all, while Bruce’s tour may be slightly overshadowed by another high-profile “British” couple currently gracing our shores, in our world, Bruce Dickinson is King, and long may he reign! 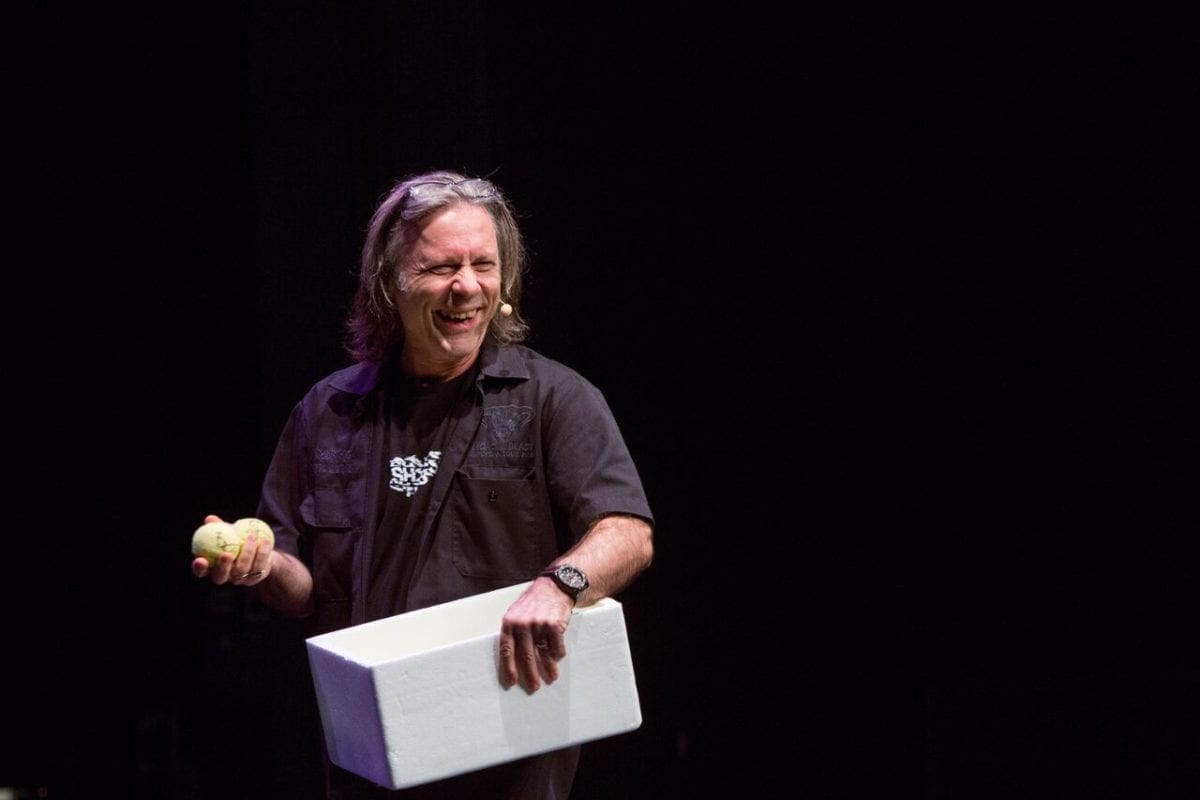 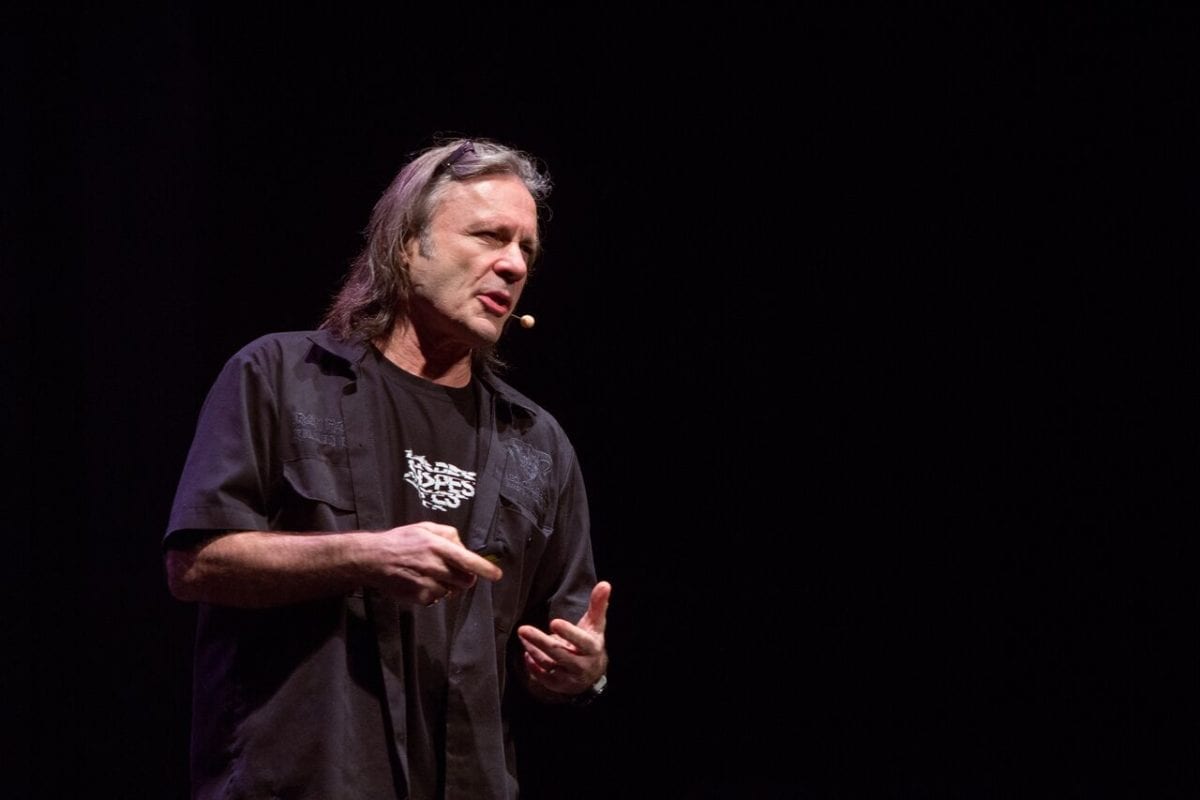 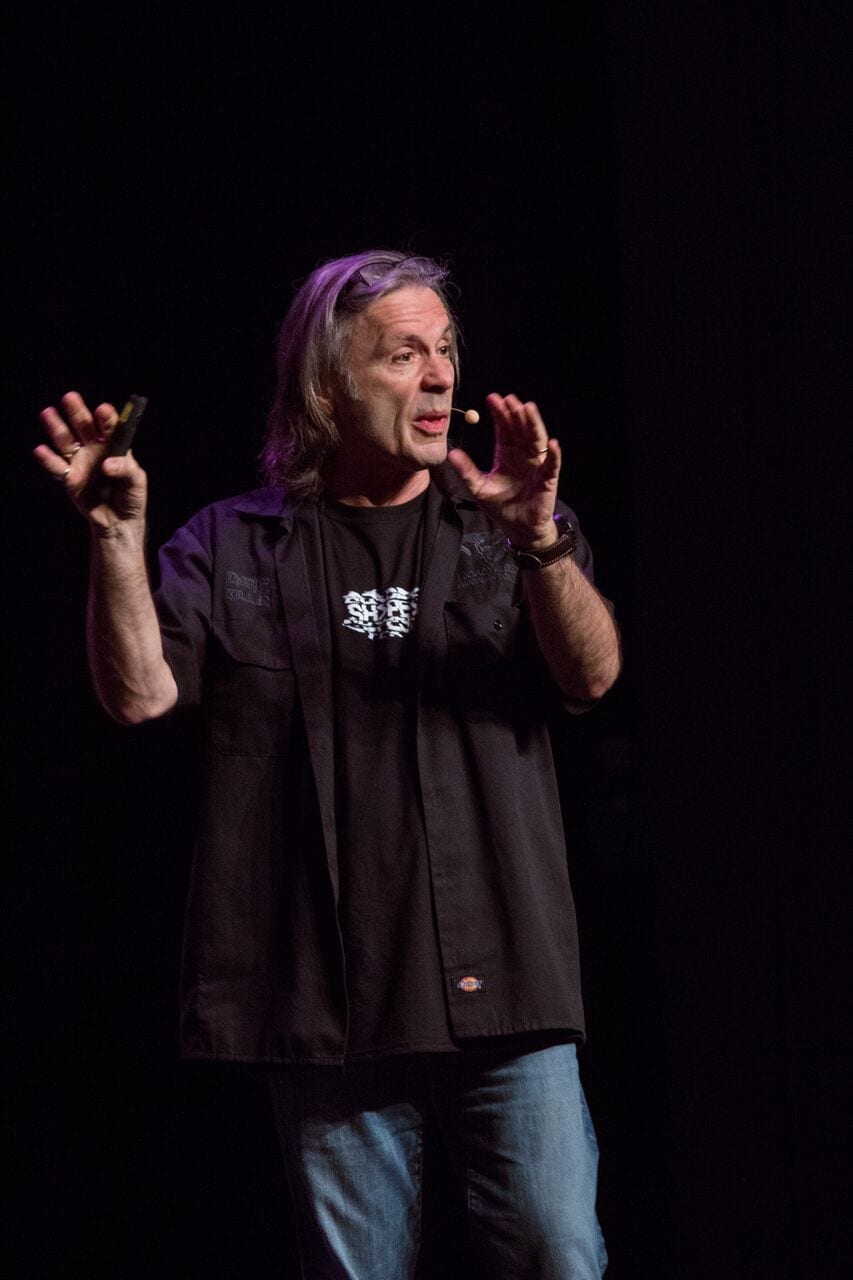 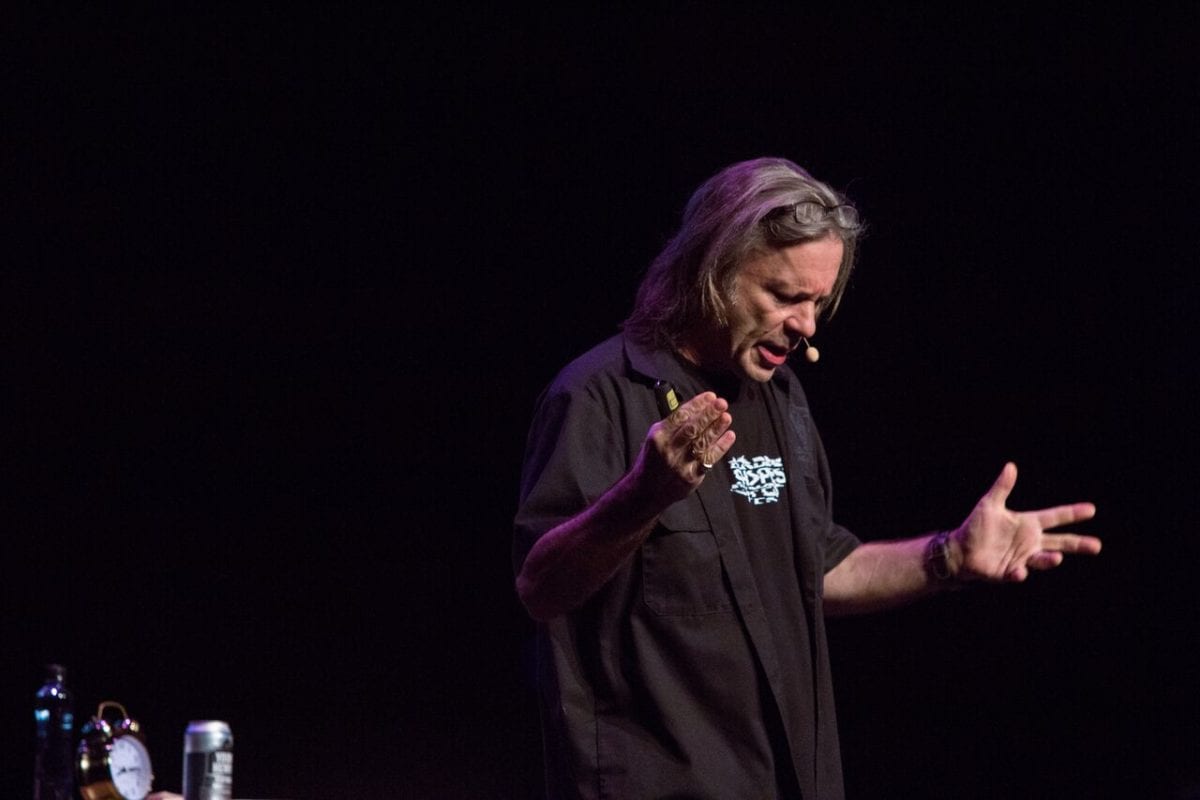 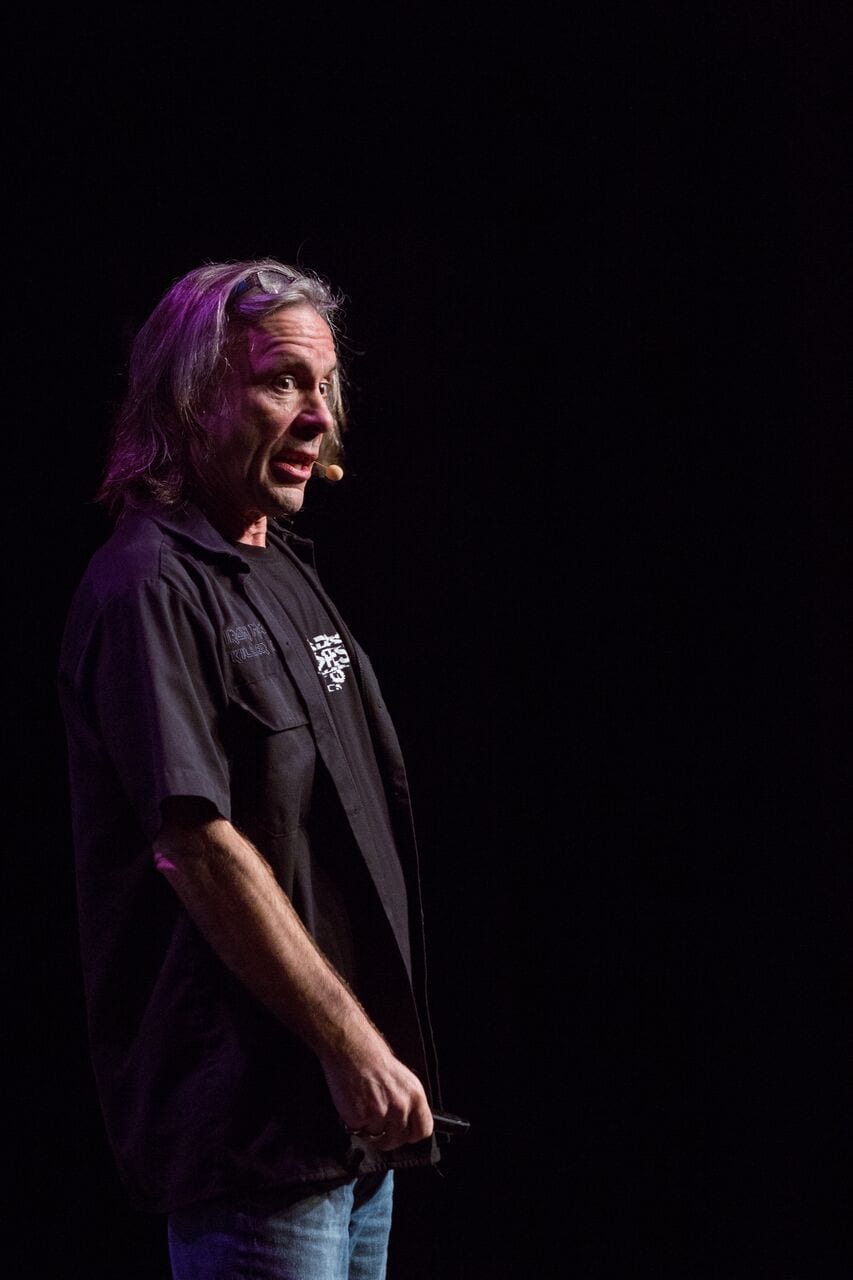