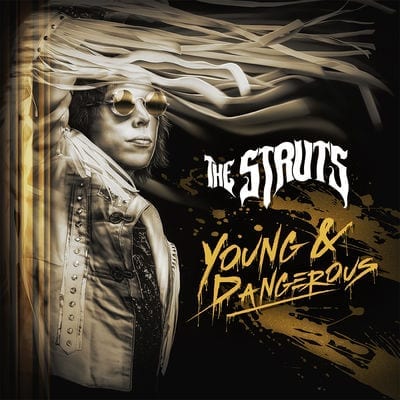 Having spent four years of their career touring their delectable debut album Everybody Wants alongside some of music’s biggest names (try The Rolling Stones, Guns N’ Roses and Foo Fighters for starters), the time has finally come for The Struts to bespatter the bleak canvas of our world with their new palette of neon vibrance, Young & Dangerous.

From the very inception of Young & Dangerous, The Struts define their music manifesto of hip-charming rhythm, vocal vivacity and all-engorging choruses. Doing what it says on their tin, “Body Talks’ (which is later revisited with edgy pop songstress Kesha) arrogantly struts in with a smile-inducing groove, acutely demonstrating the vocal genius of frontman Luke Spiller, who inhabits a voice that’s simultaneously silky and gravel-drenched. The equally bold and sexy-as-hell “Primadonna Like Me” peacocks in with theatrical city swing, divulging the hypothetical outcome of a Freddie Mercury and Sweet collaboration.

A vibrant kaleidoscope of tonality, Young & Dangerous tingles with bespangled glamour and lusciously textured raunch, from the underground shadows of “I Do It So Well” to the golden sheen of “Tatler Magazine”. Even the earthy, vulnerable ballad “Somebody New” gleams with a hint of glittered flamboyance.

However, the buried beauty of this album comes in its astute mirroring of contemporary Western culture. On the surface, Young & Dangerous is total tits, teeth and toes. Scratch into the surface of tracks such as “In Love With A Camera” and “Who Am I” and there’s the echo of Millennials’ inner torment: the seemingly untouchable, egomaniacal social(media)ites who ache with loneliness and anxiety, a product of their own world. Via the staunch invincibility of their layered, bustling NYC rhythms and breezy, electro-tinged Cali riffs, The Struts – whether via autobiographical discoveries or external examinations – tap into a sociological and psychological hypocrisy with sleek command.

An album that opens with an endearingly cocksure Spiller cackle and draws its story to a close with the sobering “Ashes (Part 2)” (“I can remember when we had the world in our hands … We burned like fire, now everything’s turned to ashes”), The Struts have crafted a vivacious, tongue-in-cheek narration of an unsettled, scary world and wondrously adorned it with captivatingly catchy choruses.