BREWTALITY at The Tote and The Bendigo Hotels, Melbourne on 3/8/19 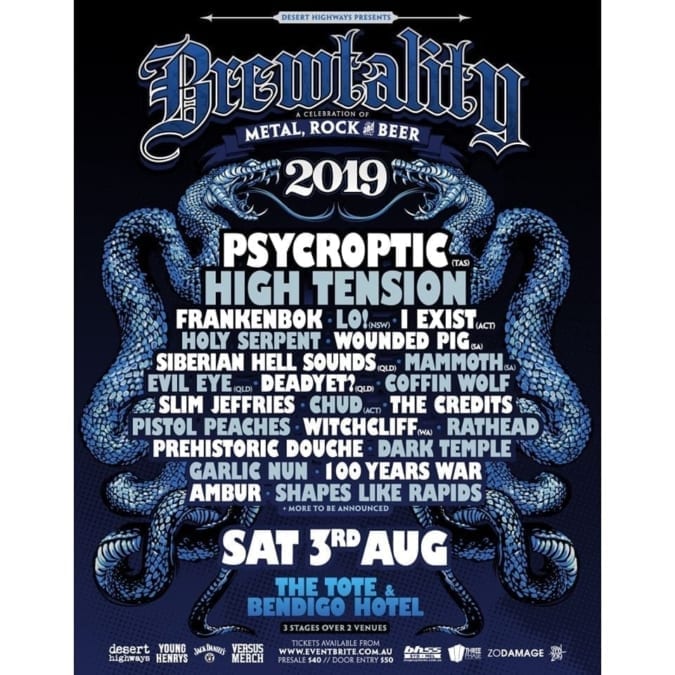 Well fans of Aussie heaviness another one of Melbourne’s annual Brewtality 2019 festival has been and gone and this year once again featured a stellar cast of hundreds making it a magnificent day/night all round.

Today was going to be a day of many first encounters band wise, having arrived at The Bendi just after doors opened the first band I bore witness to was 100 Years War. With this montrosity of an outfit to start off my day, my initial thoughts on them was “FUCK ME!” A conglomerate of five blokes with nothing on their agenda except to decimate all who stand in their path. A seemingly new band out of Melbourne 100 Years War is five piece with a punk rock “fuck you!” attitude but musically containing nothing but brutal grind intent. Reminiscent of early Sickness / Putrefaction from Carcass, 100 Years War is pure annihilation brought into the 21st Century. The seething hate and disdain contained within the band, especially emanating from their vocalist Ben whose beastly vocal delivery and stage presence is clearly spitting all he and his bandmates hold deep within towards the unaware masses before them. I would go so far as to say, even this early on in the day and only half a pint in, 100 Years War were looking like easily taking out my best on ground. I can’t wait to hear an album from them.

Immediately following on from 100 Years War was King. An Aussie take on darkened traditional cold black metal, this band featuring an all star cast have been playing extensively since releasing their debut album Reclaim The Darkness back in 2016. King’s album surprisingly has the ability to capture the bleakness of black metals harsh landscapes although being many thousands of kilometres away from its origins. Clearly a band of such caliber are able to articulate their passions and roots into this band which is audibly a labour of love and a need to artistically and musically express the five members involved with a new and fresh way that completely differs from other bands they’re normally heavily involved in.

With so many varied and amazing bands to see and hear, getting to ‘em all is impossible but try we do to fit as much as we possibly can. Hosting the day is both The Tote and The Bendigo and I started mine at The Bendi so I forced myself away to trek a few blocks up to catch El Colosso at The Tote. A bunch of long haired sweaty dudes rocking out to some killer classic golden Heavy ass rock which was the theme and flavour of the day at The Tote just all heavy rock n’ stoner featuring big guitars, big voices and just straight up balls to the wall heavy where things were loud but in no way Brutal where that nugget was kept exclusively for The Bendigo.

El Colosso done and dusted is was time for a fresh pint, dart and a stint in the beer garden. One of the particular and special things about being at an event such as Brewtality is meeting new people which involves talking about and bonding via the medium of heavy music. Today was no exception so I got chatting to a few folks about the next band to take to The Tote stage. A little known band out of Ballarat called Bunyip. A country town band called BUNYIP! What would make me possibly refuse to see and hear them play? Bloody nothing Mate that’s what! Bunyip what was described to me and were exactly what I expected them to be. As Aussie as a Ballarat “Brekkie Baccy Bong” washed down with a VB. Tongue firmly planted in their cheek lyrically and vocally but musically delivered with sheer brilliance. Bunyip are bloody great and absolutely worth your attention. I’m stoked I got to catch their set.

That’s one of the perfections of a day like Brewtality, new bands will be on tap to be served like a delicious undiscovered craft beer. You’re never sure what to expect or even how it’ll taste, but when it hits that sweet spot you’ll never forget you’re first. That’s precisely my first opinion on Bunyip and how good they were. If dirty Aussie heavy rock is your thing you’ll get Bunyip straight away!

Leaving Bunyip and my new found drinking buddies to continue to soak up the Rock n’ Stoner feels at The Tote, a trip back down the road to check out Blackhelm at The Bendi. A full house was present to witness the sonic chaos from these now very popular death/black extreme local lads. Blackhelm put on a great show and vocalist Rob knows exactly how to work his very attentive and responsive audience. Blackhelm are a great extreme band who have managed to near perfectly encapsulate their thrash, death and black metal influences. Melbourne’s Blackhelm have proven themselves as worth flag bearers of their local metal scene and both tonight’s crowd and their setlist made for a blistering show.

Going on after Blackhelm was absolute no easy feet but Brissy boys known as Deadyet? we’re definitely up for the challenge and took not only myself but many other Bendi Brewtality mainstayers by absolute surprise. Deadyet? were probably the least heavy band to grace the stage at The Bendigo all day but with that being said let it be known that Deadyet? are fucking heavy! A little bit of everything heavy mashed together to create a brilliant original sound that I haven’t heard since the late nineties courtesy of a band out of Canberra known as Henry’s Anger. Full on high energy heavy emanated from Deadyet? And like many others performing on the day, I can’t wait to get hold of some physical music from them. Check out their latest single “Early Crow” on YouTube.

So onwards we proceed through the day and immediately on stage next were Wounded Pig. Now here was my type of grind! Drum machine led, blast beat punk/grind two piece out of Mt. Gambier. A blistering set of intimately delivered get fucked aggression perfectly served to their ravenous audience by Sam on guitars and vocals with a crushing bottom end pummeled by Jessica on bass. Again another first for me and a busting of my Wounded Pig cherry. Witnessing them was almost like going back to my early days and delving into the inner murkiness of genre defining and changing extreme metal the likes of The Berzerker and their ilk. If your musical diet needs a refreshing new all things extreme diet then you absolutely need to add Wounded Pig and their album Permanent Mark to your daily intake. They’re absolutely a necessary additive to your dose of extreme violence…errr…I mean diet!

After giving my ears a well earned half hour break plus a refill of a tasty Furphy, back to the stage I went to watch Brisbane’s Siberian Hell Sounds who deliver a battering sonic assault to the senses meaning to inflict as much unapologetic carnage as humanly possible. Siberian Hell Sounds style of musical anger management is crushing cold black metal with a side smattering of crust punk. Their stage presence and performance was incredibly loud, fulfilling and punishing all at once. Have a listen to their latest release “Breath Of The Beast” [2017] on their bandcamp page to immerse yourself in Siberian Hell Sounds bleak brilliance.

Following on from Siberian Hell Sounds was the penultimate band and local blokes, the mighty Frankenbok. Set to destroy the packed Bendi the ‘bok lads delivered yet another flawless heavy rock set. As I have stated many times in my musings on the band over the past twelve months, this latest and final incarnation of Frankenbok sees them with unwavering purpose and vigour that has been their goal since their inception over two decades ago. The ‘bok are most certainly born anew and every single one of their shows I have witnessed since Dan McDougall rejoined the band as frontman proves it! Azza, Reiki, Tommy and the two Dans are at the top of their game in 2019 and delivering nothing but killer kick ass shows full of energy. Playing of some of their classic songs such as “Dig”, “Triumph” plus tonight opening with the awesome song “Monk Discipline” from their debut album Greetings and Salutations [2001] seriously I can’t wait to hear what new material comes out of the collective pores on Frankenbok in the not too distant future.

And so we marched toward the stage for one final band at The Bendi and one final chance to attempt to pummel and drink ourselves into oblivion closing out our very long and fulfilling Brewtality 2019 with none other than Tassie’s lords of chaos and hate, the mighty Psycroptic. I’ve had the privilege of seeing these blokes live many times and I have never been disappointed. Solidified by the fact that they are an incredibly tight well oiled killing machine producing some of the finest precise and amazing metal this country has heard since their creation twenty years ago. By now most fans of extreme heavy music in Australia would have seen Psycroptic at least once which should have left an indelible imprint on their senses thanks to their punishing live performances delivering music that is as solid as our unity through metal and unforgiving as the Aussie summer climate. Never having pulled a punch or been apologetic for their music and continuing to push themselves and their sound ever forward, Psycroptic time and time again without question, both at The Bendigo Hotel tonight and every time they step on stage prove consistently and brutally why they are near gods of the realm of extreme metal in this country and also the world around them. From the opening sample of Psycroptic’s set, the now capacity packed Bendi became a mass of flesh moshing and pulsating for the duration of their show and it was a heavenly experience disguised as brutal music with the soundtrack by Psycroptic plus a more perfect and fitting end to the day/night could not have been gifted to Melbourne metal fans

The pull of every single band performing at Brewtality 2019 and enthusiasm and unwavering passion for heavy music of the audience present was just magnificent. Absolute congratulations and cheers need to be directed towards Anthony Moore and his team at Desert Highways for consistently putting on an event that, cliched as it may sound just keeps getting bigger and better every year. What events and festivals the likes of Brewtality do is bring together an audience of heavy rock and metal fans together who are bound by a common unifying bond with an undying love of all things heavy and extreme where we have no prejudices or judgements against one another just a desire and need to be in one unifying place coming together to celebrate our country’s incredible showcase of heavy musical artistic brilliance.

PrevPrevious.ARCHITECTS, POLARIS and WHILE SHE SLEEPS at Thebarton Theatre, Adelaide 06/08/2019
Next.SLIPKNOT “We Are Not Your Kind’Next