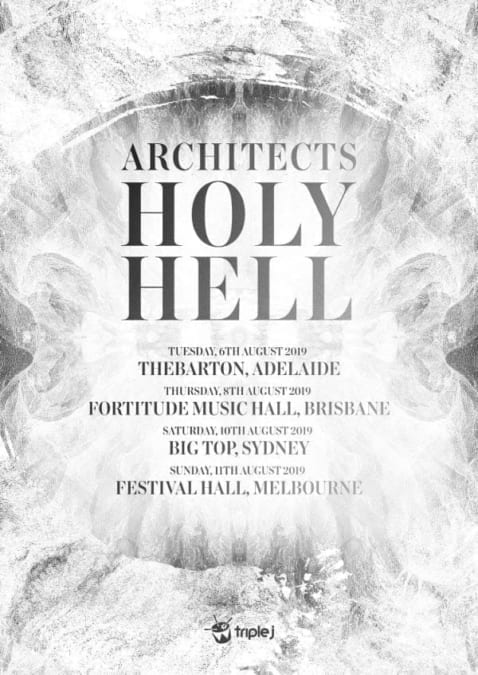 ARCHITECTS, POLARIS and WHILE SHE SLEEPS at Thebarton Theatre, Adelaide 06/08/2019

The Thebarton Theatre is arguably one of the most iconic venues in South Australia, constructed in 1926 and opened in 1928, it is a heritage listed venue which has hosted a vast history of diverse esteemed acts from the world over; in recent times it has been revealed that plans have been negotiated to demolish this historic building and understandably there has been an uproar in response to this devastating news. Petitions have circulated and thousands of signatures have been accumulated in protest of these negotiations which will hopefully dismiss any chance of a travesty of this nature to occur. Even the headline act of this phenomenal event brought up their own memories of the Thebarton Theatre and this will potentially and ideally contribute to the termination of any deconstruction plans #savethethebbie.

The opening band had an instantaneous notable difference included once they marched on stage, vocalist Lawrence Taylor was nowhere to be seen in the While She Sleeps line-up. Having announced a temporary departure a short time ago, this massive role was filled by SHVPES front-man Griffin Dickinson (son of legendary Iron Maiden singer Bruce) and he not only played the part, he destroyed it. WSS are an explosive live melodic metalcore act, every member erupts onstage, head-banging, spinning, jumping and showing blatant disregard for their own safety as well as their instruments. It is borderline threatening but on that note astonishing to watch – truthfully, this onslaught was of no issue for Griff, in fact he relished and embraced the energy. “You Are We”,  “Anti-Social” (featuring a very impressive electro-dubstep climax), “Haunt Me”, “Four Walls”, “The Guilty Party”, “Silence Speaks” (suitably inciting numerous crowd surfers to “break the borders” by hopping the barriers) and to close “Hurricane” which stirred the audience not only with their bodies but their collective souls. At this point, it was easy to forget that While She Sleeps were in fact the first billed band, this was to be a night to remember.

What a whirlwind adventure Sydney’s Polaris have experienced since the release of their debut album The Mortal Coil – sold out Australian shows nationwide, international touring with a fast-growing following on a global scale and they have performed in packed venues that are literally what dreams are made of. This was the exact circumstance which met the melodic metalcore quintet on this night, a capacity crowd numbering in thousands shouting the five-piece’s lyrics as loud as they could play them . Polaris were commanding from the get-go, a circle-pit was formed before their opening song “Lucid” and this intensity remained throughout the entire set. “Relapse”, “The Mortal Coil”, a new track called “Hypermania” which showcased a more mathcore element superbly, “Crooked Path” and “Consume” were more than just highlights, they were inspiring. Ending on a caring note where the “Wall Of Death” provoked a small injury for an eager crowd member; endearingly Polaris stopped the show to ensure the fan’s safety; it would seem the love that Polaris’ admirers has for the band is returned whole-heartedly.

The main event’s production was beyond anything Australia has witnessed before from the British progressive-metalcore luminary outfit that is Architects – this was put simply, extravagance. Allocated positions for each member, a visual running back drop of different animations, pictures and films and a lights show that NASA would be impressed by – this wasn’t a concert, it was a milestone.

The anthem that is “Death Is Not Defeat” opened the exhibition and it was clear that this wasn’t the same band who supported Parkway Drive at this exact venue a decade ago, Architects are now THE stadium melodic metalcore band from the UK. The sing-along was deafening and while vocalist Sam Carter flexed his vocal talents with angelic melodies, booming growls, piercing screams and Greg Puciato inspired shrieks, the audience produced more volume adoringly. “Modern Misery” was theatrical in its delivery while a tenderness was emitted and appreciated with a cinematic backdrop of running wolves. “Nihilist” blasted the senses of all who witnessed it proving that the five-piece can still shock and galvanise their observers in the best way possible. This was exemplified by “Gravity” and “Naysayer”, however, this was just the tip of the construction, there was so much more to come with bricks to build on.

“Holy Hell”, “Royal Beggars”, “Gravedigger”, “Mortal After All”, “A Match Made In Heaven”, “Hereafter” and “A Wasted Hymn” were flawlessly delivered with an emotional element that was impossible to not appreciate, from both the band and the audience. The passion delivered by Sam Carter as he stalked the stage, serenading and wailing while conducting his onlookers could only be matched by those present who sung along in affection. An encore was delivered featuring “Gone With The Wind” and “Doomsday” which were awe-inspiring, but more-so was the heartfelt speech broadcasted by Mr. Carter about their fallen band mate Tom Searle (who is missed sorely), as well as the care we as humans have to apply to ourselves. Architects know the feelings of grief, sadness, depression and pain as well as we do and they urged us to lookout for ourselves and one another.
In all honesty, Architects brought a new meaning to the title of their song “In Elegance” – they redefined it.

PrevPrevious.Feature: FOX ACHE “Fugitive” (Song)
Next.BREWTALITY at The Tote and The Bendigo Hotels, Melbourne on 3/8/19Next