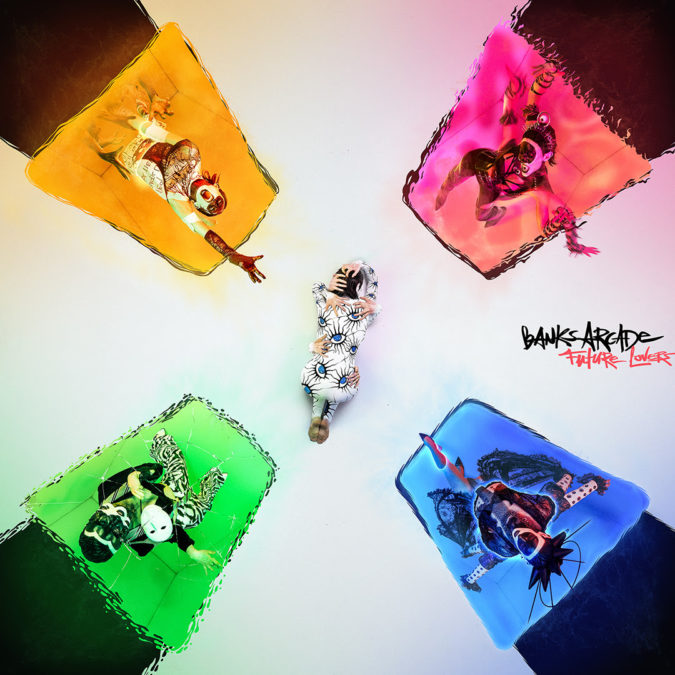 When I found myself presented with the opportunity to review the debut album by Banks Arcade, Future Lovers, I was excited. I caught their set at Unify back in January, and there seems to be a hell of a lot of hype around this band right now, evident by the number of impressive gigs they are scoring this year.

The standout thing about this album is the crossover of genres being explored. It can be disconcerting at first, at least it was for me. I had a hard time attempting to label exactly what kind of sound Future Lovers encompasses. On first listen, I wasn’t instantly dazzled. In fact, I found myself a little baffled, “is this supposed to be a heavy album?”

There are quite a few minimalistic, electronic sections that have a pop or R&B vibe. But I wasn’t prepared to write this album off on the first listen.

Future Lovers absolutely grew on me. The more I listened, the more I found merit in what Banks Arcade have done with this record. They are clearly a band with a multitude of influences and have melded these together to create the songs, and if you pressed me to give you a simple label for the sound, I would say it’s dark pop meets metalcore, but there are elements of EDM, hip hop, nu-metal and drum and bass. This is an album that holds a broad appeal, I think could convert people who don’t tend to listen to heavy music.

The first two tracks on the album, Future Lovers and Freaks, are cleverly tied together by sharing the lyrics “step into the dark, don’t be afraid.” It strikes me as a crafty way to hook the listener in. Freaks has a nu-metal feel to it, and I, for one, am so glad we can start making that observation now without ‘nu-metal’ being considered a dirty word.

The lyrical content of the songs on Future Lovers appears to have been drawn from personal experiences with tumultuous leanings, and I love hearing vocalists slay personal demons with the power of music, it absolutely strikes a chord with me. The tracks, Spark and Be Someone, really grabbed me once I started tuning into the words. The emotive nature of the music and poetic lyrics began winning me over. “Ok,” I’m thinking, “so this isn’t full of the heavy, riffy, djenty aggression like perhaps I was expecting.” No, Future Lovers is more dynamic and refined than that. This is an album designed to have you tune in and pay attention.

Track 10, Trip, is the musical embodiment of what a come-down feels like, an unease that you can’t seem to escape. It is followed by Don’t Start, which carries you into the sensation of clawing your way out the other side of the aforementioned come-down.

Wine is the perfect closing track, and perhaps my favourite on the entire album. It is such a beautiful blend of melancholy and hope both musically and lyrically. I love the way the song ends with an incomplete sentence, as if alluding to the fact that Banks Arcade intend to pick up where they left off.

While it took me several listens to gain a full appreciation, I can wholeheartedly say Future Lovers is a complex collection of songs that have had a great deal of thought and intention poured into them, and Banks Arcade absolutely deserve all the success that is coming their way.