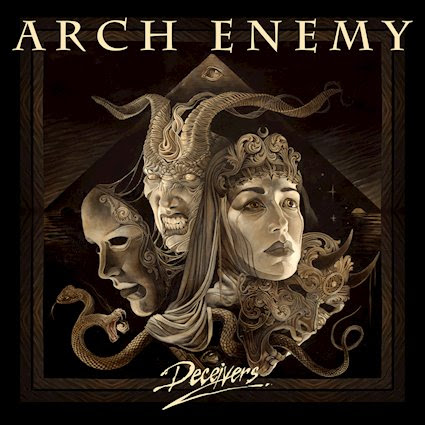 My first experience with Arch Enemy was at a drunken afterparty where a very bogan, vey metal elitist friend of mine, was all up in may face saying “Dude, can you believe this is a chick … dude”. My response, “Dude, what the fuck, you serious”. Anyway, that was a long time ago, and at that point the band was fronted by Angela Gossow. Jump forward another 15 years or so and the band is, and has been for the last 8 years, fronted by Alissa White- Gluz, who herself is a force to be reckoned with and a reminder to her male counterparts to lift their game.

Anyway, that’s enough about female fronted metal because we all know that is not a genre to begin with. Let’s talk Melodic Death Metal and Arch Enemy’s upcoming release Deceivers.

A short swell of wind swirls around while some tasty guitar noodling gets the ball rolling. Very quickly the rest of the band joins in with thundering drums and some massive rung out chords. Shit gets real serious, real quick as the song takes a thrash turn and the pace picks up. Angela soon enters with those thick solid guttural vocals and then swiftly pulls it back to some crisp cleans for the chorus. Throw in some quick guitar solos and this track solidifies itself as an absolute banger. Not short of a few more little surprises, Handshake With Hell sure is one hell of a way to start an album!

A handful of quick chugs and drum rolls throw us straight into Deceiver, Deceiver. This is an absolutely punishing and relentless track, and it leaves no time to fuck around, even when it pulls back a bit for a guitar driven bridge. Fast, brutal and groove driven. Just the way I like my metal.

The intro to In The Eye of The Storm takes me back to Terminator II for a moment, but it quickly jumps into a chugging groove with some serious bounce. Probably the slowest track so far, but definitely not the least heavy. Dual guitars take us for a short adventure in the song’s bridge and the song shifts into an instrumental interlude. Big track with big grooves and a massive atmosphere.

The Watcher, if only this was a Dr Dre cover, I would have been absolutely thrilled. But I digress, and it is not, however, I am still thrilled as fuck as the song absolutely thrashes the shit out of me straight out of the gates. This track almost speaks for itself with its ferocity and intensity. How do you best explain balls to the wall? Ewww, synthesisers. I’m sure you all know how I feel about those by now, but anyway, some clean guitars kick off and take my mind off those annoying Casio keyboard sounds.

Poisoned Arrow burns slow, but not too slow, and it still maintains a simplistic sense of heavy. Almost more melodic than metal, but metal enough to not be too melodic. Loving the crisp and thick lead guitar tones in this one.

Bass solo take 1, well, bass intro anyway and what a bass tone. When Sunset Over The Empire kicks in it has some serious Fear Factory vibes about it, and I’m so fucking down with it, I think it just floored me. As the song progresses, it shifts through thrash and groove moments to create an exciting and ever-changing sound scape. Absolute fucking banger!

I’m pretty sure Iron Maiden just entered the building very swiftly to pump out the intro to House Of Mirrors, which very quickly becomes its own monstrosity. I’m not sure what it is about this song, but the overall tone and feeling of it is absolutely massive. Maybe it’s the thundering drums, or the relentless heavy guitar chugs and rumbling bass lines. Who knows, but it’s fucking big!

This album certainly has a lot of variation within it, and I’m hearing influences from all directions. And I may be way off the mark, but hints of mid 90’s Megadeth ring through to me in Spreading Black Wings. The guitar tone is super modern, super tight, and the tonal clarity lets every note ring true. This is a slower track, but heavy, nonetheless.

Mourning Star kicks off with some slow-paced clean guitars and what may be some kind of flute. It’s a slow burner and turns out to be nothing more than an interlude. This next one is a lil’ bit pretty and reminds me of something from the late 80’s glam scene. This doesn’t last long though as the song kicks into full pace. It’s a heavy and grooving song which reaches semi-ethereal moments throughout. I mean, is not delicate and light as such, just a little more delicate than the rest of the song around it.

And here we go, the final track, Exiled From Earth. Thundering kicks guide us through the song’s opening riffs as the guitars chug along. There is a lot of groove in this one, and in the whole album, actually. I’m not sure that I’d even actually call this album Melodic Death Metal, as a whole, to be 100% honest. It’s just fucking good metal, great even!