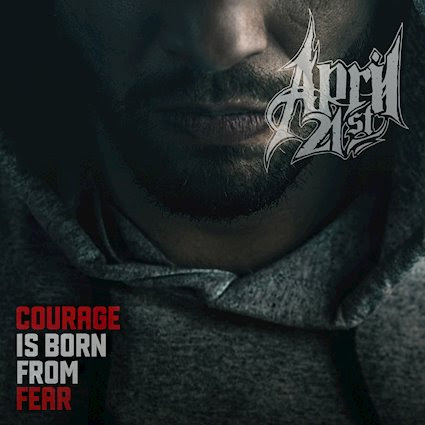 Is it just me, or is every band these days either post or core? If you could make it to post core, move on and just mention neither of those word ever again, that would be post fucking fantastic core! But here we are again, with another core band.

This time around a metalcore outfit from Brazil called April 21st, and I’m already confused because it’s August 7 here.

This one has been sent to me as an album, but with only 5 tracks, I think this sits more within the realm of an EP. After listening to the opening track Before The Storm, I’m sticking with EP because it’s a simple picked guitar chord melody backed by some storm samples. It’s sounds nice, but I’m expecting we are about to be brutalised.

Yep, Struggling To Break The Cycle opens with a brutal guttural scream and some pretty serious guitar riffing. Enter classic hardcore breakdown, and we start to hear what we’d expect from a metalcore band. I reckon I’ve heard at least 100 metalcore bands that sound exactly like this. They do it well, though, so credit where credit is due. More riffs, more
breakdowns, more screams and yeah, you get where this is going.

Stand Up and Scream is exactly what I expect is about to happen once we get through a quick little heavy instrumental section, and I’m not wrong. Oh, but what’s this? Some clean vocals wail out over the chorus, but not pop clean, just powerful clean. Not sure if there are dual vocal duties here, but whatever it is, it works with the heavy screams answering and complimenting the clean vocals. A shredding guitar solo mid-song leads us into a clean interlude before the song explodes back into some heavy screams, double kick, heavy riffs and lead melodies. This is a metal song, not a core song. Banger of a track.

Heavy solid chords and chugs back a distorted guitar melody in the intro to the final track Decision, and it quickly follows suit with the previous track with its relentless riffing. We hear a return of the powerful clean vocals displayed earlier on the album during the chorus, and a distorted bass line bridges us into the second verse. Blast beats and double kick elevate us momentarily throughout the track, and the occasional breakdown gives us a little room to
breathe in between some classic metal riffs.

This EP closes way stronger than it opens, with the last two tracks being absolute bangers! I’d just call this metal, really fucking good metal! Check it out, it’s just made my permanent playlist, and I’m sure it will make yours, if you love your modern metals that is!

Out September 10 via Eclipse Records