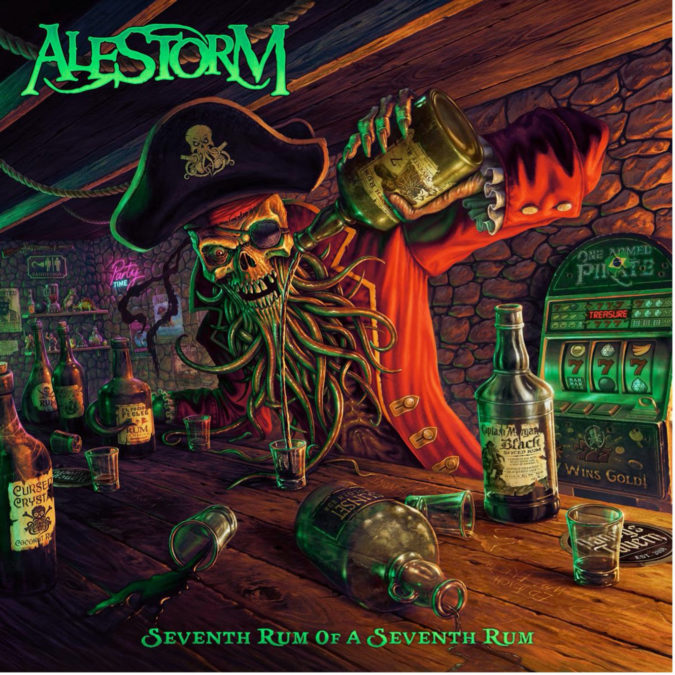 I’m not goona lie, I’m really not that into Pirate Metal, or any kind of theme metal really.

And after the last month or so of the Johnny Derp vs Amber Turd trial, I’ve just about had enough of the peg legged, triangular hat wearing fucks.

Prejudice aside, I’ll have a listen to this brand new 33 track album by Alestorm, and let you know what I really think. That’s right, you heard correctly, 33 tracks. Well, technically 3 versions of 11 of them, but more about that later. For now, I’ll let you know that it’s titled Seventh Rum of a Seventh Rum.

Opening track Magnella Expedition kicks off with a big chant before kicking into an accordion based good time. It’s exactly what you’d expect from a bunch of pirates who are 49 rums deep. Take out all the pirate stuff and the riffs are hard, real hard, and the band throws in the odd little bit of shred for shits and giggles.

The Battle for Cape Fear kicks off like a grind core track and then quickly gets back into the pirate antics. The vocals tell a pretty good story, which I didn’t really catch apart from the chorus “I’m a fucking pirate”. You get the point.

Next up is Cannonball with it Atari themed intro. Very quickly the tides turn though, and it picks up as a bit of a thrash number. Pirate Thrash, I almost like this, almost. Hahaha, I’m not even going to quote the chorus in this one, all I’ll say is that I couldn’t have said it better myself. Great song!

P.A.R.T.Y is a bit of a weird one. It almost sounds like an industrial metal version of a Venga Boys song, and I’m starting to think the Venga Boat is coming. Very interesting, and actually not that bad.

Now the Venga Boat has docked, I’m hoping that the band will get back to their usual pirate antics. And that they do with Under Blackened Banners. It’s a bit of a darker song than those before it until of course shit gets all group vocal piratey again, and the violins take over.

Try saying this track title with a few rums under ya peg leg. Magyarorszag. Yeah, that just broke me and my ability to even think about this track. Weird name, but much of the same, really.

Time for the title track, and the intro reminds me of an 80’s sports movie theme song or some shit. As it turns out, it’s a battle song, with some lyrics about seven bottles of rum. Who’d have thunk it? I wonder if they drunk it?

Bite the Hook Hand That Feeds takes off in a bit of hurry and sounds like some kind of tech metal number. Then the weird pirate noises kick in, and the vocals chime in with the usual pirate antics. Lots of double kick through this one, including some impressive triplets.

Anyone know where Tortuga is? No, well apparently the band is returning there with Return To Toruga. The spoken word in the intro sounds like Dave Mustaine dropped in for a momentary visit. Anyway, he didn’t, but the riffs in the song certainly do take on an early 80’s thrash metal feel. Again, I’d probably enjoy this more if it wasn’t all about Pirates.

Come To Brazil just might be a throwback to early Sepultura. Well, at least the riffs anyway, not sure about the weird keys going on in the background though. This one’s about a Pirate party which sounds like one hell of a good time, much like the song, and the album in general.

The album finishes with a track titled Wooden Leg (Part III). I’ve never heard part I or II, but to be honest, part III doesn’t really float my pirate ship anyway. It’s a slow one, the token end of album ballad if you will. It’s there for a reason, to close out the album. And it does just that by dragging the tempo down to a somber mood. Oh, and the verse lyrics are in some language I can’t understand, which generally shits me.

Anyway, that’s the 11 tracks. So, what about the other 22. Well, the other 22 are actually 2 extra discs of the same 11 tracks. One of them is an acoustic version, which is exactly what it says it is. Interesting take, just not very exciting, and pretty much sounds like what I guess pirate music would have sounded like back in the day. One bonus is that the lyrics are easier to understand, which is good because some of ‘em are just downright fucking funny.

Now, Disc 3. Disc fucking 3! In an interesting turn of events, Disc 3 is the disc for dogs. Literally, it’s the same 11 songs, but for Dogs, and each song is the original title with “for dogs” added to the end of it. What does this mean? What it means is that the lyrics are all replaced with dogs barking them instead. To be 100% honest, it’s fucking brilliant, and it certainly grabbed the attention of my one-eyed pirate pug Oshi. Little fucker got all excited and started barking along.