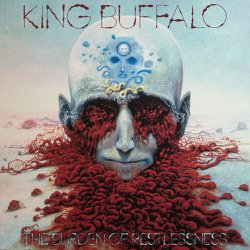 When King Buffalo wrapped up recording in late 2019 for their absolutely stellar album Deadstar it’s fair to assume that next on their priority list would be to hit the road and test out their new tunes onto some adoring audiences. With a release date set for March 2020, little did they know at the time, the absolute clusterfuck of a world they would about to be dropping their album into.

A global pandemic would shut down the world, tours would be cancelled, toilet paper would be fought over, lives would be lost, the word unprecedented would be used ad nauseum. Long story short, shit got weird and it’s been a pretty harsh time for most, with the music industry one of the heaviest to be hit.

Instead of wallowing in their own self-pity at the opportunity lost, the band resolved to use this turn of events to their advantage as best described by the band’s drummer Scott Donaldson. “Since Covid stopped all touring, we’ve been hard at work and made the commitment to not waste the opportunity.” You can put this quote down as a pretty fucking massive understatement as the band announced they would be releasing three new albums in 2021. For a band that’s only been in existence for 8 years and already released two full-length albums and four EP’s, that is a seriously impressive output and ballsy undertaking.

The Burden Of Restlessness, produced and engineered by singer/guitarist Scott McVay, is the first album in the trilogy and it’s clear from the outset the direction and theme the album is going to take.

Opening track “Burning” took all of twenty-three seconds to tickle my psych-loving senses, raise a shit-eating grin upon my face and get my foot-tapping. Searing drum rolls, chugging guitar riffs layered over singular note strokes laced in delay before bassist Dan Reynolds seriously impressive bass line turns things up a notch. It’s clear from the outset that this latest offering is going to be a more concise, punchy, aggressive and progressive effort from the band which is a most welcome addition to their catalogue.

McVay spits lyrics so impeccably linked to our current times “Another year lost in the wasteland, another one dead in the wasteland” as the song continues to build to an almighty climax. I was floored by this opening track and awaited track two with anticipation and trepidation to see if they could back it up.

A groove-laden drumbeat kicks off proceedings for “Hebetation” before McVay enters the fray with his unmistakable guitar riffage leaving space for Dan Reynolds bass to join the party and I was left in no doubt that this album had no intentions of disappointing. The interplay between the three-piece and their individual instruments is powerful and a thing of beauty. The bass and guitar especially complement each other perfectly, equally sharing moments for each to shine. Reynolds’s bass tone is flawless as McVay muses “Still every night I dream a million different ways for me to die”.

By the time track three “Locusts” rolled around I began to question whether the band are just downright taking the piss. The craftsmanship and musicianship on display completely belies their short existence as a band. Once again the interplay between bass and guitar as the drums keep it locked into a steady groove is a joy to listen to and demonstrates a band who is becoming incredibly in sync with one another and appears as though they are about to hit lofty new heights as a band. I’d like to go as far as saying this is a standout song of the album but in all honesty, all three tracks up until this point are ten out of ten to my ears.

“Silverfish & Grifter” tones things down slightly with a slower groove and the synth that was ever so present on their previous album making a more pronounced appearance. While Silverfish keeps a steady tempo and remains within its pocket, “Grifter” slowly builds and builds, lulling the listener into a daze before it opens up expanding on the primary riff of the song leading into once again an almighty instrumental climax allowing the trio to once again showcases their musicianship and chemistry.

The penultimate track “The Knocks” almost starts out as a sequel to “Silverfish” with a similar guitar tone and driving bassline before heading off in a completely different direction. If “Silverfish” can be said to remain in its pocket, “The Knocks” does anything but, taking the listener on a journey once again with an extended outro jam that sounds like it will be a blistering live track.

“LOAM” finishes the album with a track that an album of this quality deserves and foreshadows a more optimistic themed part two of the trilogy. McVay portrays some vivid imagery with lines such as “The forest springs out of the nothingness’ and “I’m shedding the burden of restlessness to rise from the loam of the nothingness”.

With two more albums still to drop before the year is out, the band has announced an extended American tour for later in the year hoping to make up for lost time on the road. Here’s hoping as a collective humanity we can all rise from the nothingness for the better, as foreshadowed on this closing song.