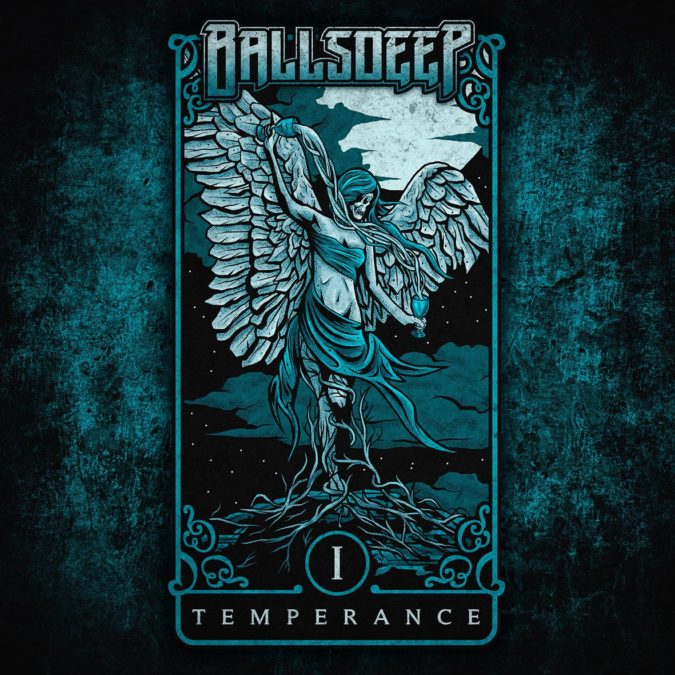 I’m not gonna lie, I’ve never heard of these UK guys Ballsdeep before, but hey, if you’re gonna do it you may as well go balls deep!

Temperence is one of a three-part album release titled Temperance, Death and the High Priestess, and I might add right now that it’s not a bad start to the series.

“Lay The Lines” opens the album sampler with a simple single string dragged-out djent style riff before opening up in the same groove and then blasting into a fast-paced thrash section, with heavy vocal screams continuing relentlessly without a breath … this is just the perfect kind of simplicity that drags you in and makes you bang your head. Rinse and repeat a couple of times until the song breaks into a quick solo, and fast thrash section before breaking down into a ½ time breakdown section and one hell of a chunky outro section. Not bad for my first experience of this band.

The next track “Claret” starts a little more laid back with some rung-out chords, rumbling drums, and semi-spoken word style vocals before hitting a quite catchy heavy rock style riff backed by thunderous drums. The song continues with this before launching into some strummed out chords followed by a short sample section and into another great breakdown.

This is an all-too-common formula, but these guys seem to do it really well, without sounding too contrived.

“Supercharger” brings in a punk/hardcore vibe with its fast-paced vocals and chord-based riffs, until it pulls back a little and then opens up with a heavy groove style section, breakdown and then ends abruptly. This 3-minute banger drags you in so quickly and deeply that it is over before you know it, and forces you listen again to take it all in.

Track “4 X “follows up with a true mid-2000’s style hardcore bounce, this time accompanied by a more drawn-out vocal attack which fits in perfectly between the gaps in the heavy guitar and bass chugs. This track doesn’t impress me as much as its predecessors, maybe because I’m a little biased against anything that sounds like that post-nu-metal hardcore of the mid-2000’s, but if that’s your thing, which it is for many, I’m sure you’ll enjoy this track too!

Part 1 album closer “King of The Heavens” brings us back to the heavy punk/thrash feeling delivered in the earlier part of the album with a rocky opening riff and fast-paced vocals. Then the chorus kicks in with a broken bouncy groove reminiscent of the heavy side of nu-metal. Rinse and repeat again until we hit a sudden stop into a drawn-out interlude section with thundering drum rolls, simplistic rung-out guitars, groovy bass lines, and sample overdubs before kicking back in with heavy vocals simple catchy rock riff to end the song.

This band delivers a formula which we’ve all heard so many times before, but they do it really well and manage to do it without it feeling too forced or fake. Fans of popular ’90s and 00’s heavy music should all find something to enjoy in their tunes. There might even be a little something in there for the younger crowds who listen to bands with 4-word genres. It would be great to see these guys tour Oz once COVID stops fucking up all our plans because I think they’d fit in quite well with the sounds and talent currently blessing our great southern land!