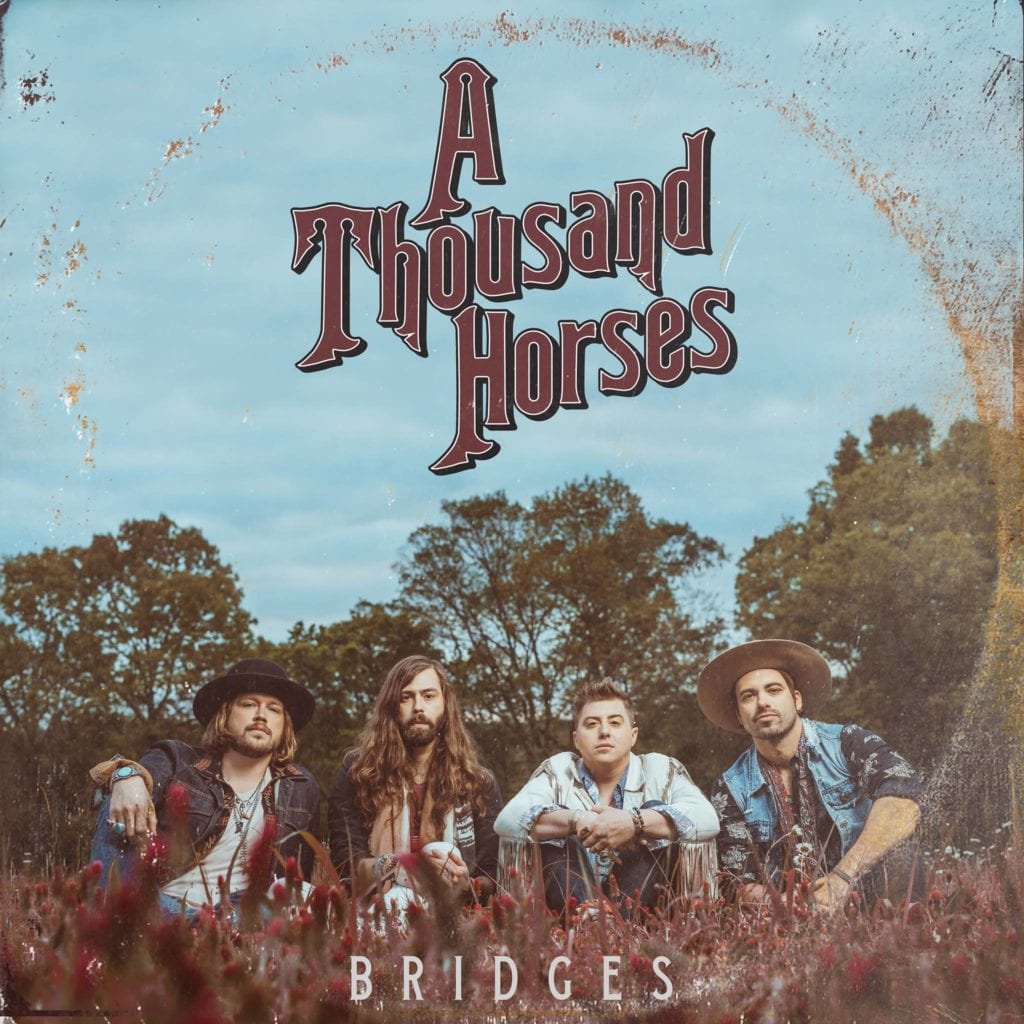 It’s fast becoming a fact that there is currently a particular adoration for southern rock music, yet it’s unclear why. Is anyone going to waste time trying to work it out when they could be listening to southern rock music instead? Nope, especially as A Thousand Horses have now released a new album. Despite teasing fans with only half an album’s worth of novel material, new 13-track HEP (highly extended play) Bridges is an offering not to be sniffed at, consisting of six tracks of shiny, new material worthy of a music magpie’s attention, and an addendum of seven live tracks that glow with the heat of true grit.

Opener “Blaze of Somethin’” firmly roots Bridges’ in its anthemic temperament. Presenting with a crisp, expansive sound best suited for that sort of scene in feel-good movies where the characters gleefully ride into the sunset in an open-top car, “Blaze of Somethin’”’s tongue-in-cheek juxtaposition to Bon Jovi’s “Blaze of Glory” is the ideal backdrop for the capriciously lost, yet ambitious, youth of today: “Might be glory, might be flames … I’m goin’ down in a blaze of somethin’.”

From here, A Thousand Horses move swiftly into the dirty groove of kickin’ bronco track “Burn Like Willie”, a song alike to the electrifying country party paeans brought to the table by Blackjack Billy. A true ear worm that is undoubtedly set to make permanent camp in the cosy folds of the brain, “Burn Like Willie” makes ample use of A Thousand Horses’ answer to Humble Pie’s The Blackberries, consequently increasing its level on the sass-o-meter to 100%. Tracks like this are dearly missed in the remainder of Bridges’ novel material, as tracks thereafter take a softer ballad approach with only a sprinkling of honky-tonk.

Title track “Bridges” is a highlight, employing uplifting gospel rigour, a riff with a tone not far off Red Hot Chili Peppers’ very own bridge song, “Under The Bridge”, and pensive lyricism that reflects the down-to-earth spirit so often seen in southern rock music. “Bridges” returns as an acoustic live track later on, capturing an arena of sound that emphasises the musical intricacies of the track and vocalist Michael Hobby’s adoption of a crunchier gravel tone. The live half of the album also sees the welcome return of four tracks from debut album Southernality, including number one single “Smoke” and the bona fide hip-shaker “Travelin’ Man”, which is newly renovated with countrified fiddle action.

With ever-growing competition in the current southern music scene, it can be easy for bands to get lost in the mix. However, the scene’s most prevalent top runners each offer a unique position on what may be known to some as ‘Lynyrd Skynyrd music’. From the glimmering honky-tonk of Blackberry Smoke to the cheek-laden smirking swagger of The Cadillac Three, A Thousand Horses slide in nicely with their sprightly happy-go-lucky tunes and Bridges continues their successful assistance in hosting the neo-southern revolution of the 21st Century.

Bridges is out NOW – get your mitts on a copy at http://smarturl.it/BridgesATH