VEAL ‘Pleased To Meat You’ 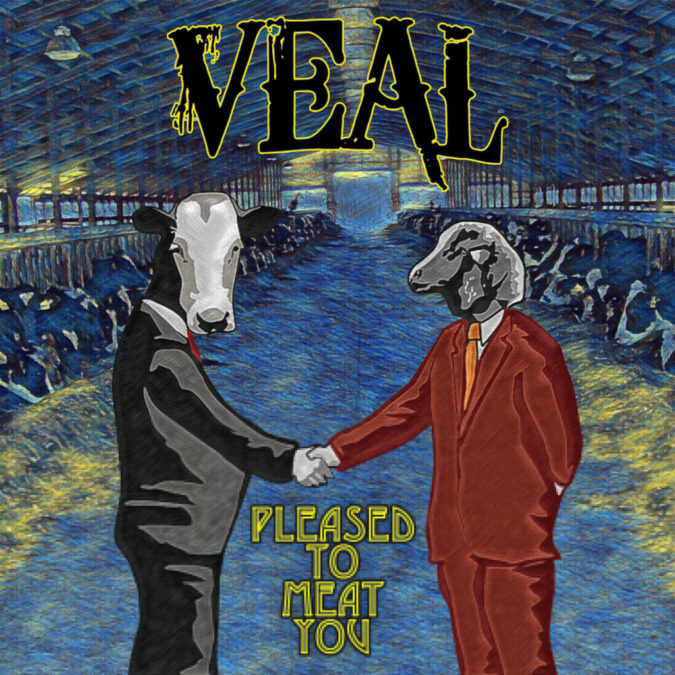 Who the fuck is Veal?

“These guys look beefed up … but not young enough to be Veal!”

That’s the description this band gives us in their press release and their social media. And after researching them a little, it turns out they look like an average bunch of middle-aged men, or boomers as anyone under the age of 25 would call them. It also turns out they only get of their lazy old arses play one show a year, and in the last 7 years have released a grand total of 7 tracks up until this latest release, Pleased To Meat You.

Keeping in line with the band name, their previous releases were titled The Meating and Fresh Cuts. The Meating was their initial EP release featuring 5 tracks with names such as One of Britneys Mums Pubic Hairs, I Could Eat Peach For Hours, and I’m Low On Gas And You Need A Jacket.

Their second release Fresh Cuts, a double single, featured only two tracks titled Groundhog Day and Brent Rambo. If you are into your pop culture you’ll get some of those references, and if not you’ll just get lost wondering what the hell these guys are on about.

By the sounds of it, the band doesn’t seem to take themselves too seriously, and they can’t quite figure out how to plug in their instruments during the intro to the first track, The Darkest Timeline. A scream of “Let’s Fuckin Go” wails out over a lo-fi intro riff and the band instantly blasts into an absolute rager of a rock riff. It sounds like the band has taken a moment of serious reflection in this song as the lyrics seem based around current world events and personal reflection. The seriousness breaks after the second chorus as a guitar solo rips out with some epic bends and licks which are not too dissimilar to the guitarist of my namesake, Slash himself.

The solo takes a twist half-way through, and the band slows down momentarily to a more melodic feel. It sounds like the two guitarists Dan Maynard and Jimmy Glinster may have shared lead duties in this solo, but I guess you’d need to see them perform it to confirm.

A quick shout of 1,2,3,4 leads the band into a fast punk-based riff which seems to continue through most of the song, bar a quick interlude featuring some background samples of a car’s revving up and an event announcement. The track is called Hot Wheels Derby, and it actually appears that it might be about something to do with Hot Wheels. Maybe they were playing with their hot wheels toys one day and pretending to be big boys with real big boys’ toys? Clocking in at just under 2 minutes, it’s a quick ride, a bit like a lap on a hot wheel’s track, and just as fun!

Drummer Chris Dennis opens up Liquor Out with a quick drum roll and the band takes off again with another rocking riff. Their riffs seem to sit somewhere between Hard Rock and Metal with just a touch of Punk. It’s a good blend, but let’s get back to that track name. Liquor Out, that’s a pun right, surely? Well, I’m not too sure at all because the first lyrics that poke out have something to do with slaying dragons, and after that it’s all about gang vocals shouting, “how do you” and a response of “live with the pain you caused”. I sure hope no one’s fighting dragons, or in pain while they are getting liquored out.

Another solo breaks through in the middle of the track with a ripping run up the fretboard followed by some shredding which seems to channel, or at least try to channel, a number of guitarists from the mid 90s including one with a top hat, one with a bag, another with a wah, and that other guy that disappeared to Japan. The band suddenly changes tempo and key, and it appears that the lead duties are again being shared, as the lead shifts to a style which you could liken to any of the lead guitarists from the 90s grunge scene. A shredding run straight out of the thrash Metal handbook ends the solo and throws us back into the gang vocal chorus to end the song.

In a not so strange turn of events, the next track Aquarage has me wondering from the get-go what the hell the song is about? After another rocking intro, the band hits a nu-metal style bounce and groove riff and vocalist Dan starts singing about being in the water, being pulled under, facing the darkest of foes, and someone aiming for the hole. Soon after we hear him pose the question, “Who needs the lube when you are surrounded by water, the slaughter?”.
What the hell is the song about?. The poster for their previous Aquarage tour would suggest something to do with Dolphins. Dolphins, holes, and lube, I’ll leave that one for you all to figure out after you enjoy the solid rocking bounce and groove of the track.

Next up is Tom’s Cruise Control, which kicks off with another rocking riff. Who knows what’s going on lyrically with this song, or what the hell it’s about, but it just keeps rocking riff after riff. That is until it breaks down into a drum and bass section of single stabs which then leads us into a strange interlude of softly spoken lyrics, claps and the odd guitar chug. It eventually hits a peak and the guitars and bass hit some massive, chugged slides as we are told to “Bring them down”, “Tear it down” and “Flip that frown”. A momentary break of silence then throws us back into another verse and chorus as the song ends as rocking as it begun!

Anatidaephobia: The fear that somewhere, somehow, a duck is watching you. That is the title of the final track on the EP, and by all lyrical accounts, it’s about a duck watching you. From what I’ve learned about Veal so far, this track kicks off in their true style by rocking hard, and it continues to rock throughout the verses. The choruses pull back momentum a little to warn as that he’s watching you, and he’s got his eyes set to kill, the duck that is. The verses and choruses repeat until a melodic bridge blends some harmonic chords over the rocking riffs. A solid, melodic, rolling bass line by bassist Matt Nosworthy, with some tasty bends throughout, fills it perfectly and leads into a dramatic and epic resolution of rung out chords and a few sharp stabs before the song rocks it way back out again.

Hot Wheels, Water for Lube, Evil ducks, what the hell are these guys on about? Who cares, really, because it’s a rocking good time from the get-go. It would be good to get hold of some lyrics to possibly make some sense of it all, but in the big picture I don’t think it really matters because these guys don’t seem to take themselves too seriously, so why the hell should you!

Get some Veal on ya fork!

Check it for yourself here https://open.spotify.com/album/4T3wNyQwqFNAsI0ed7gQuQ?si=JJvYcDqBQm6G9hCH0daw-Q