A Decade Of Mayhem With KING PARROT It’s hard to believe that around 10 years ago a native Australian bird that quietly went about its business identifying as a King Parrot was about to have its identity and status unceremoniously ripped from its majestic wings and would forevermore play second fiddle to its new namesake.

Yes, people, Melbourne grindcore (for want of having to label the mayhem) outfit King Parrot this year celebrate a decade of destroying stages around not only their home country but also that of the world at large.

It is a journey that has seen the band rub shoulders with and work alongside some of the biggest names in the business, but throughout the quartet have remained true to their roots and their ability to mix lashings of humor and finesse to an otherwise destructive form of music.

“It’s pretty cool man,” Youngy smiled, the enormity of the occasion seemingly dawning upon him as we spoke. “Reflecting back on the last 10 years it’s been a crazy sort of ride for a band doing what we do. We’ve been very lucky and grateful to have the opportunities we’ve had, and we have destroyed a lot of stages around the world (laughs). Hopefully, we can get out there a little bit over the next six months and continue doing that. The tour that we’ve planned is more of a gradual tour spaced out over the next six months because we figured that we wouldn’t be doing much else in terms of touring overseas or anything like that so we just gave ourselves a chance – like everyone else we’ve had the last year off – so this gives us the opportunity to get back into things and hopefully get around the country and play some shows and see all our friends and people we haven’t seen in quite some time now.”

King Parrot have left their mark, influence, and respect on audiences around the world, a surprising feat given the in-your-face and aggressive style of music that spews forth from the stage every time they perform. Their appeal – especially for a more extreme metal band – is universal and overwhelming, a point not lost on Youngy and the rest of the band.

“Initially the idea with King Parrot was to… I guess recreate… or more pay homage to all the Aussie bands we grew up listening to and loved,” he measured, “or in Squiz‘s case were part of (laughs). That was the idea, to try and create a band that was really an underground sounding band, not necessarily any specific genre so to speak, but to incorporate the elements of grindcore and thrash and punk rock and hardcore stuff and put it all into a unique sounding band that was influenced by stuff like Blood Duster, Damaged, Sadistik Exekution, Alchemist, you name it, and of those bands that were there and at the forefront of the scene when we were growing up. We wanted to create our own version of that so I guess as the band developed we grew and we lost a member here and lost a member there we wanted to bring in people that were not only committed to touring but were also able to bring something to the table and the band. Having people like Squiz and Slatts – who’s basically been there from the start anyway – and now Toddy as well who has been in the band a long time as well, but having those sorts of characters and people who could bring their own element and flavor without having to do anything… the beauty of King Parrot is that we’re just ourselves. We don’t have to put anything else on, don’t have to wear a mask, or do anything other than be ourselves. I think that’s probably what has held us in good stead over the years. We just do King Parrot and that’s all we know how to do. You either like it or you don’t. If you don’t, get fucked, if you do let’s party.”

In the full interview Youngy runs us through some band and personal highlights over the journey, details the band’s success both in Australia and overseas, talks about the upcoming anniversary tour and what to expect, hints at new music, speaks about King Parrot’s continuing approach to supporting up and coming Australian bands, the balance between professionalism and levity within the band and how important both roles are and more. 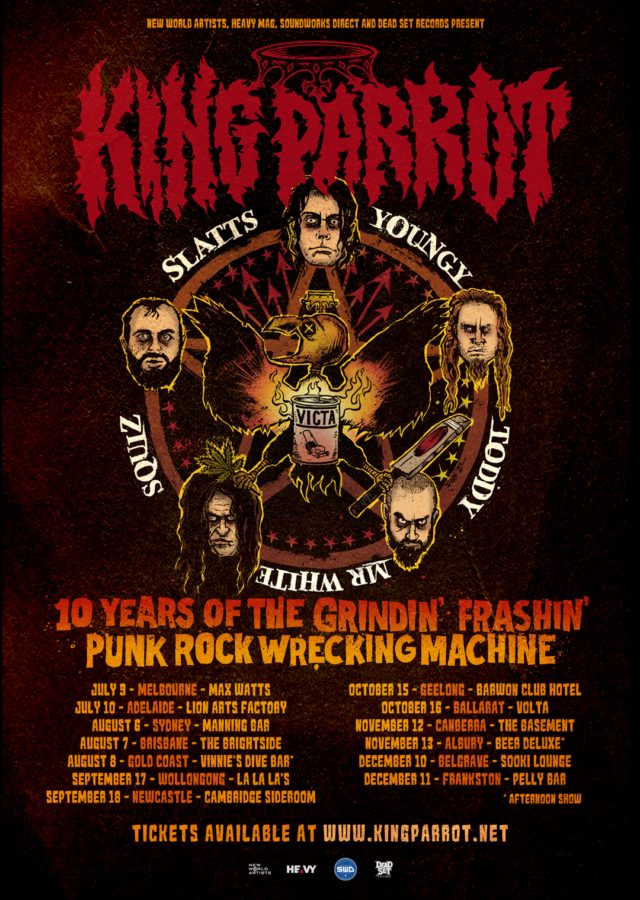