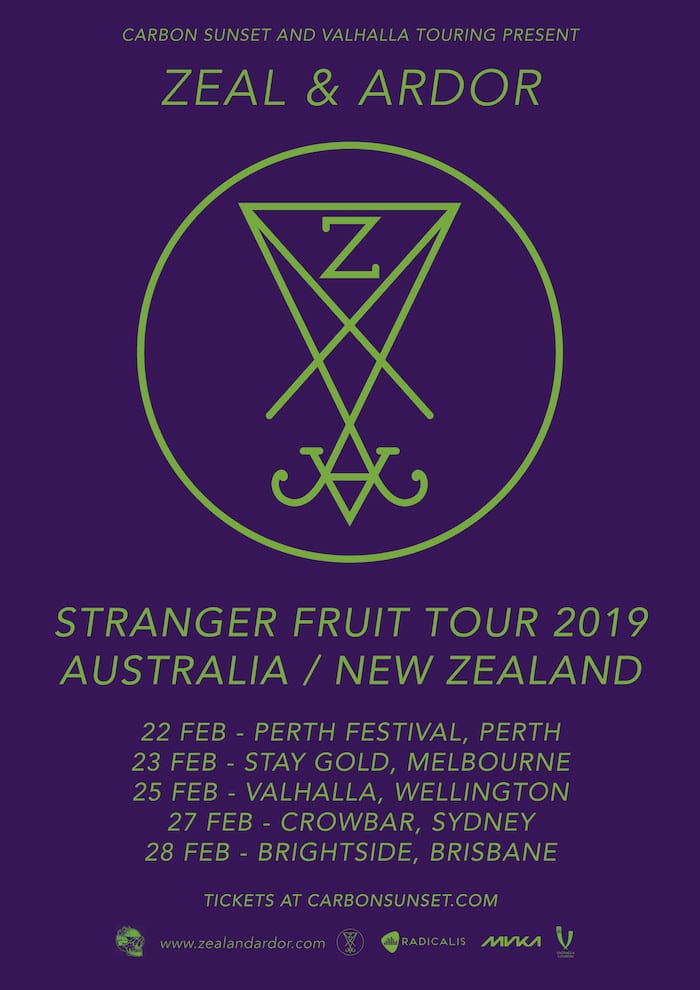 When I first heard Zeal & Ardor’s Stranger Fruit album, I wasn’t quite sure what to make of it. But with each listen, the album grew on me and was one of my favourite albums of 2018. I’ve often wondered what the band would sound like live, and tonight, I got the chance to find out.

Judging by the attendance at Crowbar tonight, I’m not the only one who has been captivated by Zeal & Ardor’s unique sound, but first, the supports. Opening up tonight was Sydney solo artist Burden Man. Having read the reviews of his debut EP Shadows Of The Dying, I wasn’t quite sure I’d be into this style of music. Burden Man delves into the depths of despair of the human mind, with songs about loss, death and loneliness. His songs are dark, brooding pieces delivered in monotonous vocal style. The Nick Cave influence shines through in the vocal delivery, and the songs build from a simple, drone-like strumming into epic riffs and solos. By the end of the first song, the crowd was into it, and the large number of early arrivals showed their appreciation with loud cheers.

Up next, it was the uncompromising and unapologetic punk rock assault of Dispossessed. These guys are old school punk. Raw and energetic, with songs played at break-neck speed and delivered with a truckload of aggression. What sets them apart from other punk bands is the content. While the songs are politically charged, Dispossessed confront the struggles faced by many rural communities, and in particular, indigenous communities. The song Thronebreaker is a great example of what the band is about. They closed their set with a cover of Bodycount’s Copkiller. Guitarist Jacob explained that they play this song to bring attention to the issue of indigenous deaths in custody. It’s as in your face as you can get, and it is an immensely powerful statement. By the time Dispossessed was done, the band room at Crowbar was full, and they were sent off with a rebellious roar.

There was a great vibe building in the room, and I had a sneaking suspicion we were about to witness something amazing. At the risk of sounding like a gushing fanboy, there aren’t enough adjectives in my thesaurus to truly explain in words how good Zeal & Ardor were tonight. The magnificent musical mayhem spawned from the mind of Manuel Gagneux will be forever etched in my mind as one of the best live performances I’ve ever seen. Inspired by a racist comment on the internet, Zeal & Ardor combine elements from different genres of music that, on paper, just don’t belong together. But, Gagneaux and co make it work, meshing Blues, Soul, American Gospel and Black Metal into songs that explore America’s violent history.

The band played tracks from both releases, Devil Is Fine and Stranger Fruit. There wasn’t a great deal of interaction between the band and the audience, with the Manuel simply saying hello, and thanks and goodbye, and also asking if it was ok to skip the usual bullshit of the ‘staged’ encore. The band were happy to let the music do the talking. The musicianship on display was enthralling, and the band transitioned effortlessly from blues, to soul, to American gospel, to blasts of Scandinavian black metal, and back again. However, it was the captivating vocal performance that was the standout. The gospel choir vocals present in many of the songs, and also the Gregorian chants in the song “Ship On Fire” were simply amazing. These elements encourage the audience to sing along, which only adds to the atmosphere. In between all of this, there was plenty of headbanging during the heavier parts of the songs.

Every single song during the set sounded fantastic, and there were no flat spots, but the undeniable standouts were “Row Row”, “Ship On Fire”, “Fire Of Motion”, and the mesmerising closer, “Baphomet”.

Zeal & Ardor is a musical force that bucks trends and transcends the normal boundaries of music genres. As well as the mystifying technical aspect of the songs themselves, there is also a spiritual element that adds depth to the music and speaks to the fans on a whole other level. If you haven’t got a ticket for this tour yet, I suggest you do so…to miss this would be….blasphemous!

PrevPrevious.QUEENSRŸCHE ‘The Verdict’
Next.ENSIFERUM and Espionage at Max Watts, Melbourne on 02/03/2019Next