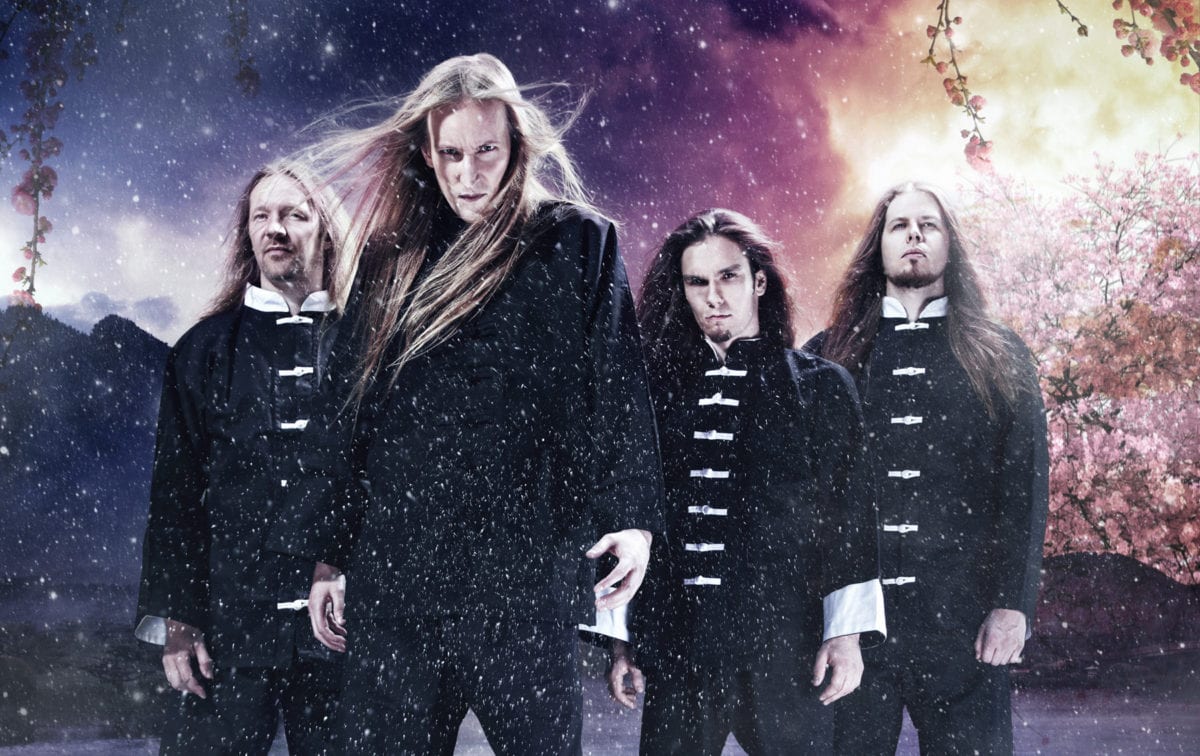 “Oooh, I’m excited,” purred Wintersun bass player Jukka Koskinen down the line from Finland ahead of the band’s upcoming debut performances in Australia. “Adventure is something new to happen that is always great. I’m all ears to see what the craziness level is over there (laughs). My gut feeling is that everything is going to be amazing – at least I hope so – judging from all the messages and feedback from the Australian Wintersun fans. I’m sure they are going to be very good shows, at least from our side. We are very excited to play for people and we want to play wherever possible so we’re bringing a bombastic finish to you guys and hopefully, you’re going to enjoy it (laughs).”

The polar side to the band coming out here for the first time is that the fans as well don’t know what to expect, but Jukka assures that they won’t be disappointed.

“In July we released our third album, The Forest Seasons, so of course the emphasis is on that so we’re going to bring all the old and the new songs to our setlist. It will be a diverse selection of all of our songs. Our set, now that we have the new album songs in it, will be very atmospheric and very in depth – a lot of depth – and since our new album is a little more straightforward we can focus more on the atmosphere of the songs.” While The Forest Seasons may be more straightforward musically, it definitely breaks new ground in that the album is made up of four songs, each reflecting different seasons. Opening with ‘Awaken From the Dark Slumber’ which is an ode to Spring, the album takes you on a sonic journey that is as entertaining as it is enlightening, perfectly encapsulating the sound and feel of what has previously only been known by words.
Because of this, undertaking the album was an ambitious project, but one which Jukka says has paid dividends.

“It has been extremely well received,” he stated proudly. “First of all, we thought how it would be received since the album is a tiny bit different from the early material – but in a good way of course. I think universally it has been well received and it is nice to see that our vision has really got to the people as well because we wanted to make a more atmospheric and more… how should I say it?… even more emotional material on the album than we had before. People have really gotten the idea and they really seem to like it. I think the epicness and atmosphere is also a lot bigger. When it comes to the diverseness there are four totally different songs from each other when it comes to the concept because it is the forest seasons and a different song for every season of the year so it is a perfect package.”

While admitting the band knew how big an undertaking the album would be, Jukka also says Wintersun knew that the fruits of their labour would not go unrewarded.

“It started from our mastermind Jari (Maenpaa),” he explained, “who got this inspiration while wandering the forest in Finland to make a tribute song for Mother Earth and from there it just grew and since we had the crowdfunding idea at the same time we wanted to bring something new to the table. One new song wouldn’t have been enough of course so we worked on a whole new album. Then a thematic inspiration came from one of the four seasons music wise and it made sense because ‘The Forest That Weeps’ was the first song that came out which was kind of a Summery feeling so we decided to make songs for the other seasons as well. Sort of like pick your favourite season (laughs).”

Coming up with the right sounds to reflect the different seasons was challenging, admitted Jukka, and was another vital component of the process that required the right amount of personality and authenticity.
“Of course the album is from a very Finnish perspective when it comes to the seasons,” he reflected, “because the Finnish climate can be quite harsh. Even the summer song, which is ‘The Forest That Weeps’ is a very harsh song because the Finnish Summers can be quite short and quite cold and rainy sometimes as well. Some dude once said that Finnish Summers can be very short – last year it was on a Tuesday! (laughs) Basically when it comes to Autumn… let’s say the Autumn on our album is not like the start of Autumn, it’s more like just before the Winter when everything is pitch black and raining a lot so kind of like the elements. When it comes to ‘The Eternal Darkness’ it was there quite easily and when it comes to Winter, of course, there is a lot of snow and when the snow comes down there’s a tiny bit more light and it’s kind of calm and everything is dampened with snow on the ground. When it comes to the Spring it is similar to Autumn with a lot of rain but more sun – when there is sun – but then everything starts blooming and getting brighter so the elements were quite easily there and especially because the Finnish climate is very heavy metal in many ways because they are very different from each other. It’s not like we want to say that the cello is Autumn and the trumpet is for the spring or something like that. It was more using all the instruments that were needed to bring out a certain element or a certain feeling.”

Wintersun formed in Helsinki in 2004 when Jari decided to put into action some ideas he had been kicking around in his head since 1995. At the time he was singer and guitarist for folk metal band Ensiferum but it was evident from early on that Wintersun was his passion project. After writing and recording basically the entire self-titled debut himself with the help of drummer Kai Hahto, Jari left Ensiferum when the public started demanding more from him and Wintersun. It was at this point that Jukka found himself drafted into the fold.

“Personally, I have known Jari since before Wintersun so I knew what he is capable of and he is a mastermind when it comes to composing his kind of music,” Jukka gushed. “I heard the demos before Jari even recorded the first album because the first album was supposed to be a solo project and then he hired Kari because the songs were quite fast and up-tempo and very challenging so he needed a solid drummer for the songs, so that’s how the two of them did the first album. Already when I heard the demos I was really into it, like what is this crazy shit (laughs). It was very, very technical, fast music and already atmospheric with a lot of dynamics. It was amazing stuff. At that time I was playing in another band called Norther where I played for many years and I also understood it was just a solo project so I had no idea it was even going to be a band but then he recorded the album and started getting a lot of attention so Jari decided to make it a band and he contacted me personally and asked if I would like to join and I said hell yes! He didn’t actually believe me (laughs) so I had to prove myself for a long time after that I really wanted to be in the band. I had already listened to the music so it’s kind of funny when it comes to Wintersun because I used to compose with my other band but with Wintersun, it’s about Jari mostly. From Day 1 it feels like I’m at home, it’s funny. Maybe it’s because my mindset is quite similar when it comes to Jari and what kind of music we like and what kind of atmosphere we want to create.”

With a blending, in simplified terms, of folk music and heavy metal, Wintersun was one of the pioneering bands of the genre and Jukka feels because of this the band quickly settled into their own niche market.

“I think in the first place there was a lot more folkish elements on the first album,” he mused, “and my part in it was unique but I think the music industry people labelled it more as folkish element stuff but when it comes to now and you think about Wintersun and all the three albums we’ve released the stand out thing is that Wintersun’s music is epic, that’s it. It’s hard to categorize Wintersun because there are so many different elements. It’s atmospheric and it’s epic and it’s metal music. Those are the closest I can get. When it comes to comparing us with other bands I don’t think anyone would sound close to us. Of course, there are bits and pieces from here and there and connections to other bands but overall I think Wintersun’s music is very unique and I haven’t brainwashed myself (laughs). I truly believe it is.”

WINTERSUN with Orpheus Omega and Claim The Throne performing at: